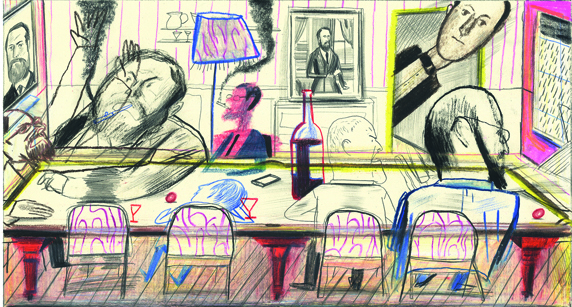 Today is primary day in Minnesota and a few other states. Primary day in Minnesota raises issues of politics and party — the routinization of party politics — elections, history, tradition, loyalty, gab and more, putting me in mind of James Joyce’s story “Ivy Day in the Committee Room.” Readers may recall the that the memory of Parnell looms large in the story. “Parnell is dead,” says Mr. Henchy. After some prodding, Mr. Hynes rises in response to recite his elegy for Parnell. In the Minnesota DFL, someone might observe today, “Humphrey is dead,” but no one will rise to recite an elegy on his behalf.

The crosscurrents roiling the national Democratic Party are all on display in the DFL primary today. By far the most interesting races are taking place on the DFL side. Here are a few brief notes on the DFL races:

Governor: Erin Murphy is the endorsed DFL candidate. Murphy is a cookie cutter Twin Cities leftist. Minnesota is not yet there. Murphy is challenged by two strong candidates, incumbent Attorney General Lori Swanson and First District Rep. Tim Walz. Murphy defeated Walz after for the party endorsement after seven rounds of balloting at the state party convention. The endorsement of Murphy prompted Swanson to jump in. Both Walz and Swanson have abandoned secure positions (in Walz’s case, relatively secure) to seek gubernatorial office and are left-liberals holding themselves out as mainstream candidates. I think Walz will prevail. I will be surprised if Murphy comes in any better than third. If so, this will be a surprisingly weak showing for the endorsed DFL candidate.

Lieutenant Governor: Each candidate runs on a ticket and at the invitation of a gubernatorial candidate. Murphy selected gay millennial “intersectional organizer” Erin Maye Quade. We’re still scratching our heads trying to figure this one out. Quade is a nonentity best known, if known at all, for holding a 24-hour sit-in at the State Capitol in April to demand gun control. State representative Peggy Flanagan is running with Walz. Retiring septuagenarian Eighth District Rep. Rick Nolan is running with Swanson. I think Nolan has proven a negative for Swanson.

Attorney General: Gay millennial Matt Pelikan challenged incumbent Attorney General Lori Swanson for the nomination at the state convention. When Swanson didn’t win the party’s endorsement on the first ballot — she would have won it on the second — she withdrew to run for govenor. Pelikan is a Twin Cities attorney of no substance. Incumbent Fifth District Rep. Keith Ellison declared his intent to move on from Congress and run against Pelikan as the DFL candidate for the office the day before the filing deadline in June. In a sane world that no longer exists in Minnesota politics, former Commerce Commissioner Mike Rothman (endorsed by the Star Tribune) and former Ramsey County Attorney Tom Foley might be serious contenders in the primary. Despite the late breaking domestic abuse issues that are dogging Ellison, Ellison’s urban base should be enough for him to prevail here and give the Republican candidate (Doug Wardlow) the chance to win the office for the first time since, ahem, 1966.

Senate: We have both Senate seats on the ballot this year. Amy Klobuchar is the popular incumbent. She has a genius for avoiding controversial issues, an unerring instinct for finding meaningless issues to generate positive press, and an underserved reputation as a nice person. Just ask one of her many ex-staffers. But she has no intraparty opposition. Appointed incumbent Tina Smith has drawn a challenge from recent Republican and not quite-Democrat University of Minnesota Law Professor Richard Painter. We have followed Painter closely. He is a man without a party; his constituency is the audience served by the perpetual Trump hatefest on CNN and MSNBC. In the primary contest Painter has provided little beyond comic relief. Smith, it should be added, is a vacuous Twin Cities leftist who served as Mark Dayton’s lieutenant governor. I think Smith will survive Painter’s comic challenge to face the more formidable Karin Housley on the ballot in November.

Fifth District: Incumbent Rep. Keith Ellison seems to have timed his decision to move on to serve the interest of state representative Ilhan Omar to succeed him. Omar secured the party endorsement at the special DFL endorsement convention on June 17. We have closely covered this race. Former Minnesota Speaker of the House Margaret Anderson Kelliher is Omar’s most formidable challenger in the primary today. Kelliher mopped the floor with Omar at the candidates’ forum at Temple Beth El last week. I covered the forum on Power Line and even spoke briefly with Omar on her way out of the sanctuary. My strong impression is that Omar knew that Kelliher had drubbed her but that she didn’t care; she knows she’s going to win.