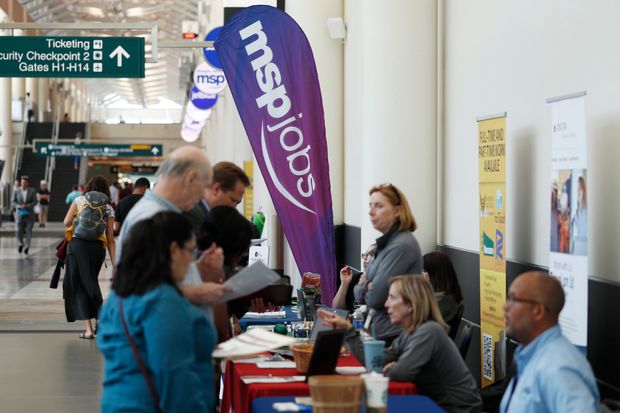 Applicants chat with potential employers during a jobs fair at Minneapolis International Airport in Minneapolis, July 17.

One of the more remarkable media campaigns of recent times is the current attempt to persuade Americans that the economy is worse than it seems. Every day our competitors are filled with columns, editorials and news analyses asserting that tax reform has failed, wages aren’t rising, investment is falling, and growth is an illusion. We’re reminded of the old Chico Marx line, “Who ya gonna believe, me or your own eyes?” Apparently Americans are believing their own eyes.

The National Federation of Independent Business reported Tuesday that its small business optimism index climbed in July to the second highest level in its 45-year history. At 107.9, the index is within 0.1 point of its July 1983 record. The July survey also set new highs for owners reporting current job openings or plans to create jobs. The biggest problem in the survey is that 37% of owners say they had job openings they couldn’t fill. Meanwhile, the Atlanta Federal Reserve Bank’s wage growth tracker moved up to 3.3% in July on an annual basis.

None of this guarantees future prosperity, and the economy needs years of growth to make up for the 2% malaise of the Obama era. But Americans are smart enough to know a better economy when they see one.