How Bruce Ohr Could Implicate High-Ranking Obama Officials In Spygate 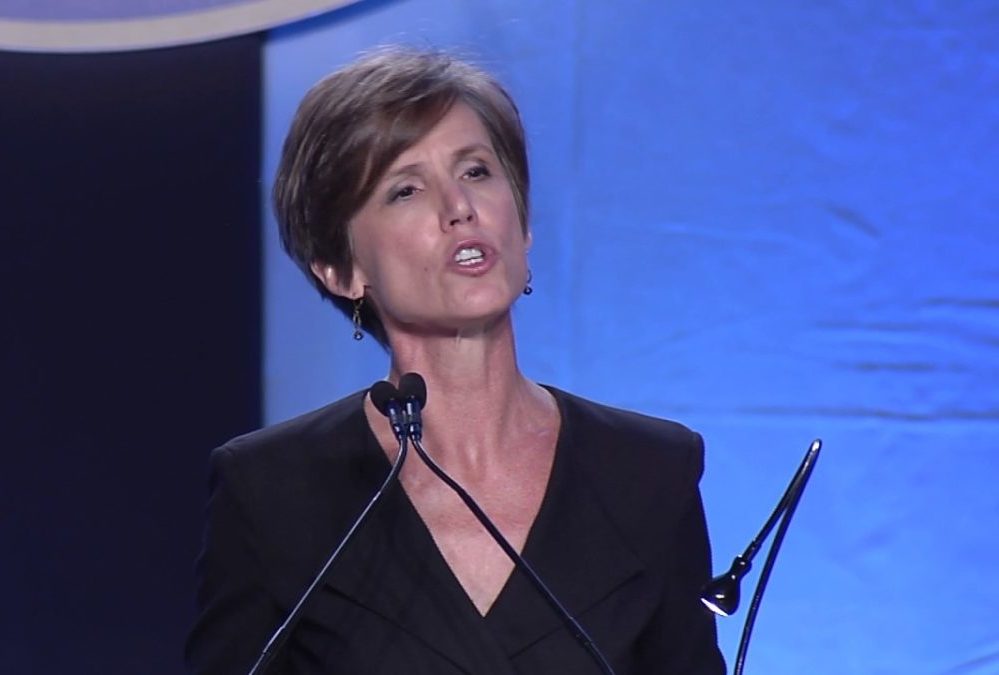 Solomon’s reporting confirmed the FBI used Ohr to continue gathering information from Steele, even after the former British spy was terminated as a source by the bureau because he leaked word of the investigation to the press. Ohr’s role as a conduit allowed the FBI to continue to use Steele as an indirect source, even after Trump was elected and inaugurated.

Ohr lost his high-ranking slot at the Department of Justice in December 2017, when the Trump administration learned of his connection to Steele, and with it his office just doors away from Deputy Attorney General Rod Rosenstein. He briefly retained a high-ranking position as the director of Organized Crime Drug Enforcement Task Forces, but was demoted a second time in January 2018. He still works for the DOJ, but no longer holds a top leadership position.

Rep. Devin Nunes, who chairs the House Permanent Select Committee on Intelligence (HPSCI), said last week Ohr “is going to become more and more important” to the investigation into the DOJ’s use of Steele’s dossier on Trump to obtain permission to spy on his former campaign advisor, Carter Page. That’s the understatement of the year.

The details revealed in the emails and texts, in conjunction with previously released information, suggest DOJ and FBI employees operated outside the chain of command, misled their bosses (and the Foreign Intelligence Surveillance Court), and concealed evidence from congressional oversight committees. Let’s review two key questions the revelations raise.

1. How and why was Rosenstein kept in the dark?

Solomon’s reporting is consistent with Rosenstein’s congressional testimony. On June 28, Rosenstein told the House Judiciary Committee that “Ohr was never working to my knowledge on that Russian investigation.” He reiterated the point a second time, saying, “To my knowledge he wasn’t working on the Russian matter.”

Significantly, Rosenstein also testified that he did not know of Ohr’s connection to the Russian investigation until “sometime in the fall of 2017,” and said Ohr’s transfer to a different office was arranged “when we learned the relevant information.”

This timing proves significant, because it means Rosenstein did not know about Ohr’s involvement in the Russia investigation, or Steele’s continued role as a source when he signed off on the fourth and final Foreign Intelligence Surveillance Act (FISA) application from the FBI to spy on Page.

The FISA applications relied heavily on the Steele dossier, which Rosenstein apparently knew about. What he did not know, according to his testimony, is that his assistant, Ohr, was continuing to filter Steele’s intelligence to the FBI, even as the FBI declared in that final application that Steele was no longer a source. Ohr apparently did quite a bit of filtering from Steele to the FBI in order to keep Rosenstein in the dark.

For instance, we know from a letter the Senate Judiciary chair sent to Rosenstein and FBI Director Christopher Wray in July 2018 that the FBI interviewed Ohr a dozen times between November 2016 and May 2017, and recorded the details of those interviews in official FD-302 forms.

Ohr also spoke with Glenn Simpson, who was overseeing Steele’s work on the dossier, in December 2016. He wrote in notes on the meeting, according to Solomon’s reporting, “that [Simpson] believed Trump’s longtime lawyer, Michael Cohen, was the ‘go-between from Russia to the Trump campaign.’” Ohr presumably passed on this intel to his FBI contacts.

Additionally, we know from lead FBI agent Peter Strzok’s July 12, 2018, testimony at a joint hearing before the House Judiciary Committee and House Oversight and Government Reform Committee that “The FBI received documents and material from Mr. Ohr,” and that the documents included material originating from Steele. We also know that following Trump’s election, and after Steele was terminated as an FBI source, he authored a final report, dated Dec. 13, 2016, included in the dossier. It seems reasonable, then, to assume that one of the documents Ohr gave the FBI consisted of this final report from Steele.

Yet Rosenstein apparently knew none of this when he approved the filing of a June 2017 FISA application to renew the spy warrant on Page. Rosenstein’s ignorance proves informative when considered in light of his June 2018 testimony before the House Judiciary Committee, when he refused to say whether he had read the June 2017 FISA application. Instead, he explained the FISA approval process to the congressmen:

We sit down with a team of attorneys from the Department of Justice, all of whom review that [application], [and] provide a briefing for us about what is in it. … No FBI personnel briefed me on [the FISA application]. The process is that these FISA Applications and Renewals first come up through the FBI Chain of Command. They are sworn under oath by a career federal agent.

Rosenstein’s testimony detailing the FISA application approval process presents three possible scenarios that could explain how he did not know that Steele remained a source for the Russia investigation by feeding the intel through Ohr.

First, it is possible the FBI did not include any information in the June 2017 FISA application that Steele or Simpson fed through Ohr to the FBI. However, without access to the unredacted FISA applications and the FBI 302 interview summary forms, it is impossible to assess whether the final FISA applications included Steele (or Simpson’s) post-November 2016 intel.

A second possibility? The FBI agents involved in drafting the revised FISA applications could have included information Steele or Simpson filtered through Ohr, without naming the Fusion GPS sources or mentioning Ohr. But, again, it is impossible to know whether the FBI played this sleight of hand without access to the unredacted FISA application and 302 interview summaries. (Of course, the congressional oversight committees could assess this point.)

One congressman noted, though, that the FISA renewal application lists the name of “the people that briefed [Rosenstein] on the substance of that FISA renewal.” Was Ohr one of the individuals involved in briefing Rosenstein? If so, it would seem Ohr intentionally kept his boss in the dark on Steele’s continued role in the Russia investigation.

2. Did Ohr keep Sally Yates in the dark too?

Rosenstein’s congressional testimony added another peculiarity to ponder. In discussing Ohr’s misconduct, he stressed as “important” the fact that Ohr is a “career employee” of the DOJ, and that when he arrived, Ohr was already part of the office. Rosenstein said he “never involved” Ohr with the Russia investigation or “assigned” him any role in it. So, that raises the question: Who from the DOJ did assign Ohr to the investigation?

The texts and emails between Steele and Ohr provide a suggestion. As Solomon reported, Ohr’s involvement with the Russia investigation dated to the beginning of Steele’s involvement. Steele wrote to Ohr on July 1, 2016: “There is something separate I wanted to discuss with you informally and separately. It concerns our favourite business tycoon!”

That note came a mere four days before Steele first met with an FBI attaché stationed in Rome to share the initial portions of his Trump dossier. Then on July 30, 2016 — the day before the FBI officially launched its investigation into the Trump campaign’s connections with Russia — Ohr met with Steele in person in Washington DC.

At that time, Ohr served under then-Deputy Attorney General Sally Yates, who remained in her post through Jan. 30, 2017, when Trump fired her for refusing to defend his travel ban. That means Ohr reported to Yates in November 2016, when he began filtering information from Steele to the FBI, including on Dec. 13, 2016, which was the date of the final report by Steele included in the dossier.

It also means that Yates oversaw Ohr’s work on Dec. 10, 2016, when he met with Steele’s Fusion GPS boss, Simpson, to gather more details of Fusion GPS’s research on Trump. Additionally, during the time Ohr served under Yates and acted as a conduit for Steele’s intel, the FBI interviewed him a total of seven times.

Significantly, Yates approved the January 2017 FISA application to spy on Page, which potentially included the intel Ohr relayed to the FBI from November until January, in contravention of the FBI’s termination of Steele as a source.

We don’t know what Yates knew about Ohr’s role. When Yates testified before Congress in May 2017 about the Russia investigation, Ohr’s involvement was still secret, leading the Senate Judiciary Committee to focus instead on her role in instigating the firing of Trump’s former national security advisor, Michael Flynn.

Once again, Ohr and Steele’s exchanges detailed by Solomon provide a hint: The day after Yate’s firing, Steele contacted Ohr, texting “doubtless a sad and crazy day for you re-SY,” a clear reference to Sally Yates. “Just wanted to check you are OK, still in situ and able to help locally as discussed, along with your Bureau colleagues,” Steele added. Then, after Ohr confirmed “I’m still here and able to help as discussed,” Steele stressed that if Ohr was out at DOJ, he needed another “(Bureau?)” contact.

Was that because Yates approved of Ohr acting as a dossier courier for Steele and the FBI? If so, the Spygate scandal reaches into even higher echelons of the Deep State than previously known. Ohr has a pretty good incentive to come clean and expose anyone else at the DOJ (or in the Obama administration) involved in the decision to continue to use Steele as a source. Otherwise Ohr will hold sole responsibility for going rogue.