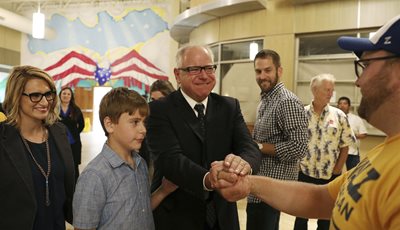 Is there a blue wave coming in November? One certainly showed up in Minnesota last night, despite competitive primaries on both sides of the ballot in the state’s primaries. It portends an entirely different kind of “canary in the coal mine” moment from the Land of 10,000 Lakes than Jazz proposed earlier this morning.

The headline news in Minnesota’s primaries is Tim Pawlenty’s surprising defeat at the hands of the more populist and Trump-leaning Jeff Johnson. However, the numbers in the two gubernatorial primaries tell a more ominous story for Republicans. In Minnesota’s open primaries, voters can choose to participate in either party’s primary but are then restricted to the one party for the whole ballot. Voters here in Minnesota chose Democrats — by an overwhelming margin.

In the gubernatorial election, Republicans received 319,276 combined votes, with Johnson getting 167,922 (99/8% of precincts reporting). Democrats got almost twice as many — 580,962 votes. Johnson got far fewer votes than Tim Walz got (242.162) in his plurality win over Erin Murphy for the Democratic nomination. In fact, Johnson got fewer votes than Murphy did for her second-place finish, 186,367, and only outscored third-place finisher Lori Swanson by 25,000 votes.

The same dynamic appeared in the primaries for both Senate seats, thanks to the one-party-only rule. Democrats had incumbents running in both primaries without much competition. Amy Klobuchar got almost 96% of the vote in her win, while appointee Tina Smith got 76% in hers. Both Democratic primaries still attracted 579K and 567K, respectively. In contrast, the more competitive GOP primary for the challenge to Smith didn’t quite draw 300K votes, which Karin Housley won 62/36 over Bob Anderson.

This wasn’t a case where one party didn’t have a competitive race. Both partieshad hard-fought gubernatorial primaries, and in the Senate races all of the real action was on the GOP side. And yet Democrat turnout beat Republican efforts by an almost 2:1 margin. That’s a huge red flag, or as someone quipped on Twitter last night, a huge blue flag. A blue wave may or may not appear on a national basis in November, but one showed up here yesterday. It makes it seem highly unlikely that the state Republican Party will break its 12-year losing streak in statewide races three months from now.

Addenda: The data didn’t look quite as grim in some key House races. Not all eight districts featured competitive primaries in both parties, but MN-01 and MN-08 did, thanks to incumbents switching to state-office races. In MN-01, Tim Walz’ old district, Democrats outperformed Republicans but by fewer than 5,000 votes.

They did better in MN-08, though, where Rick Nolan retired to run as Lori Swanson’s lieutenant governor. This is where Trump made his biggest pickups in 2016, but Democrats outpolled Republicans here by 18,000 votes last night. The GOP primary was more of a walkover (Pete Stauber got 90% of the vote), while Joe Radinovich only won with 44.2% in a Democratic race where four candidates ended up in double-digit percentages. But it’s still an ominous turnout signal for what has been seen as Trump Country for the last couple of years in Minnesota.

Finally, no one had a worse night than Lori Swanson. She would have cruised to victory had she chosen to run for another term as attorney general. Instead, after winning a majority but failing to clinch the party’s endorsement on the first ballot at the DFL convention, Swanson switched races and chose to challenge Walz at the last minute for the gubernatorial nomination.  That left the door open for Ellison to come forward and embarrass the party, put the MN-08 Congressional seat into serious play (thanks to drafting Nolan as her running mate), and wound up out of electoral politics for the foreseeable future as a result. That’s as big a faceplant as has been seen around these parts for a while.