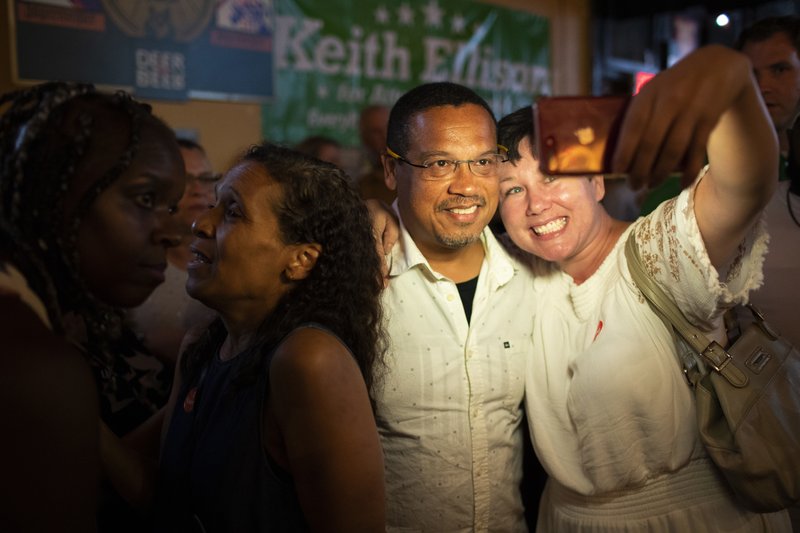 Perez told reporters as he campaigned in Georgia that he takes “very seriously” any accusation of domestic abuse. Ellison has denied the allegation, and Perez said the matter will not threaten Democrats as they try to capitalize on opposition to President Donald Trump driven overwhelmingly by women.

“Democrats have been winning everywhere,” he said. “Our democracy is on the ballot. That’s why you see the remarkable energy … that I think continues.”

Still, Perez said the national party is “absolutely taking a careful look” at assertions that Ellison, currently a Minnesota congressman, physically and emotionally abused an ex-girlfriend, Karen Monahan, in the past.

The allegations first surfaced over the weekend before Tuesday’s primary.

Monahan’s son alleged in a Facebook post that he had seen hundreds of angry text messages from Ellison, some threatening his mother. He also wrote that he’d viewed a video in which Ellison dragged Monahan off the bed by her feet. Monahan said via Twitter that what her son posted was “true.”

Ellison issued a statement Sunday saying no video exists “because I never behaved in this way.” He went on to a primary victory Tuesday, claiming the Minnesota Democratic-Farmer-Labor Party’s nomination for state attorney general.

Monahan has so far declined to provide any video or copies of text messages to The Associated Press. She has told Minnesota Public Radio News she will not share the video because she said it’s humiliating.

Minnesota Public Radio News reported Sunday that it reviewed more than 100 text and Twitter messages between Ellison and Monahan that showed the two communicating over months after their breakup, including coordinating her getting her things from his house. MPR said the tenor was sometimes friendly, sometimes combative.

In one message, MPR said, Monahan told Ellison she planned to write about their “journey” and Ellison warned her not to, calling it a “horrible attack on my privacy, unreal.”

MPR said there was no evidence in the messages it reviewed of alleged physical abuse.

Asked whether he’d talked directly with Ellison since the allegations surfaced, Perez told The Associated Press, “I mean, he won his election yesterday, so I certainly talked to him to congratulate him.” Asked to clarify whether he had talked to him at any point about the allegations, Perez added, “Yes. As I said, we take it very seriously. We’re conducting an investigation, and when you’re conducting a review, you talk to people.”

The chairman offered no details about when the DNC’s inquiry might conclude. The national party committee, which comprises more than 400 Democratic figures from around the country, is scheduled to gather next week in Chicago for its summer meeting.

Perez defeated Ellison in an unusually contentious party chairman’s election in February 2017. He immediately asked his former rival to join him as deputy chairman, a nod to Ellison’s backing from the progressive movement that remains critical of Perez and other establishment liberals.