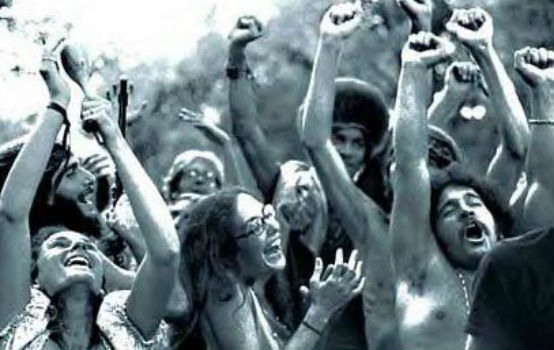 Dividing U.S. politics and culture into old and new, 1968 remains a landmark year in the public mind. Amid failure in Vietnam, the much-detested President Lyndon Johnson announced he would not seek re-election in late March, and four days later, Martin Luther King, Jr. was assassinated in Memphis. Cities across the country burned.

Berkeley, where I lived, was in turmoil. News magazines and television specials—obsessed with the California youth revolt, psychedelia, and free sex—depicted Berkeley as a red-hot center of radical politics and rapture. Street people and malcontents were pouring into town, looking for thrills and drugs. What had been an elegant academic bohemia steeped in arts-and-crafts simplicity and Robinson Jeffers-style nature worship was expiring from overexposure.

On June 5, California held its presidential primary election. I cast my first-ever vote for the charming gadfly and former Minnesota senator Eugene McCarthy, in whom I believed—really believed—with the kind of political enthusiasm that is—and should be—a once-in-a-lifetime experience.

Then that night, horribly, Robert F. Kennedy was shot at the Ambassador Hotel in Los Angeles. I was minutes from Good Samaritan Hospital the next day seeing a draft lawyer when Kennedy died. My revolutionary act, such as it was—and it seemed so to my parents—had been to drop out of business school in order to pursue a graduate history degree, rendering me draft-eligible. Amid the fast-rising antiwar movement, even my Purple Heart father was turning on the war and the carnage.

During the ill-starred Democratic National Convention and Chicago riots from August 26 to 29, antiwar protesters shouted at police and news cameras, “The whole world is watching!” They knew which side most Berkeley, Wisconsin, and Harvard students would take. Working-class America, facing a harder nut, did not join the rage or rapture. Condemned as lowbrow and backward, the butt of educated contempt, they turned instead to Alabama’s former governor George Wallace for political relief. Resentment was profound, as indicated in the 1968 and 1972 presidential elections and the deep social fissures that still split the nation.

In his sympathetic appraisal The Making of a Counter Culture, Theodore Roszak argued that the youth revolt offered nothing less than salvation. Greedily pursuing progress and reason, the nation had engineered a malign, lethal society capable of nuclear annihilation. Youth culture posed a challenge to what he called technocracy—mechanistic, impersonal, planned, efficient “modern” society—and the soullessness that accompanied it.

College students obviously were not alone in contemplating the horrors of nuclear incineration, the tyranny of communism, the death of God, and the persistence of racial conflict. Many establishment guardians—themselves deeply uncertain about contemporary arrangements—unwisely turned to the youth for answers, mistaking innocence for insight.

Widely televised Berkeley protests before 1968 had stirred national attention but also some derision. “Only in California, with more beauty, wealth and freedom than mankind has ever known, tanned, well-fed, and healthy students are claiming to be slaves and prisoners,” economist Carlo Cipolla exclaimed at the time, having lived as a youth under the Italian fascists.

What had begun as lofty quest descended into bathos and kitsch. The moneyed revolt against Nietzsche’s Last Man, living in a tract house, humping for dollars, and driving a Buick, anticipated David Brooks’ middle-aged bobos in paradise. Acclaimed as saviors, rebellious youth, convinced of their genius and unique moral destiny, embraced political style as a system of belief.

The prevailing campus spirit at Berkeley in the mid-Sixties had been Camelot-style liberal, venerating the fallen hero JFK, Michael Row the Boat Ashore, fighting world communism and intending to put a man on the moon. Most students were content within the technocratic state and eager to join its ranks. Cal graduates enlisted in the Peace Corps, not Students for a Democratic Society.

Then, quite suddenly, cool moved from Kennedy-style white Oxford shirts and can-do pragmatism to longhaired forest creatures quoting Kahlil Gibran. Sorority girls wearing madras skirts donned Mexican peasant blouses one day and dangly silver earrings the next. Accessories included funky Volkswagen buses, Cost Plus exotica, and European grand tours on $5 or $10 dollars a day. Berkeley students often seemed to have quite a lot of disposable income, thanks to their uncertain, hopeful, dollar-humping parents.

Aesthetic adventure beckoned. The Sixties turned to religion and the humanities, responding to technocracy’s power. (In the same spirit, New York Times columnist Ross Douthat calls upon the humanities today to rescue time-honored wisdom and the sacred from technocratic monopoly.)

The Tao and I Ching, Carl Jung, Hermann Hesse, Alan Watts, Charles Baudelaire, and Aldous Huxley were all guides to higher consciousness. Marshall McLuhan observed an irresistible shift from printed page to electronic screen that would radically change perception and cognition. McLuhan insisted this shift was really, really big—truly revolutionary—and he was right.

By 1968, fueled by psychedelics—”Lucy in the Sky with Diamonds”—a small, visible, largely coastal beau monde grew stylishly clubby. In Laurel Canyon, the Los Angeles music and drug scene was already getting very dark. Entrepreneurs like Rolling Stone’s Jann Wenner and poet Rod McKuen—as well as account executives on Sunset Strip and Madison Avenue—realized there was big money to be made in the counterculture.

Before 1968, political radicals and Aquarians had been working two different idea systems. For the self-involved counterculture, politics were a “drag” or “too heavy.” While Timothy Leary’s bliss-seekers chanted tune in, turn on, and drop out in Wheeler Auditorium, Marxist visionaries plotted the end of police state Amerika. Uninterested in metaphysics, they sought to overthrow capitalism and alter its ruling class, not to make contact with the sublime or transcendent.

Had Roy Rogers and the Mouseketeers spun an impossibly sunny moral universe, leaving privileged adolescents unprepared for adulthood and human misery? From the early Peter, Paul, and Mary and Kingston Trio to Bob Dylan and Jefferson Airplane, social redemption and brotherhood had arrived on 33-rpm vinyl in pretty tunes and words.

By 1968, in music, books, and film, testing limits was swelling into sport and baiting virtue was turning into entertainment. “A citizen’s responsibility is to his government, his church, his school, his parents, his community, and his local police force,” the hideous Mr. Christian shrieked in the 1968 cult film Candy, adapted from Terry Southern’s gonzo take on Candide. My own rallying cry—and I believed it at the time—was “freedom without license.” I was young, as was the counterculture, and the prospect of total choice was intoxicating.

Freedom without license promised opportunity, novelty, and fun. But as easy sex, drugs, and rock and roll expanded their reach and went downmarket, thrills were the endgame. Social hell broke loose. Whatever turns you on took on a hollow, even sinister ring, avoiding judgment when censure was sorely needed. Roszak considered Michelangelo Antonioni’s 1966 movie Blow Up pornographic, unable to foresee the sexual shudders of the Seventies.

Harris’s stagey exclamations have a direct line to a liberation movement that is a half-century old, but with a difference. Politicos trying for selfish ends to strip “white culture” of whatever legitimacy it still possesses are saddled to technocracy. Twitter-based politics and Silicon Valley’s electronic netherworld perfecting mind control? No problem.

The heirs of Sixties rage want re-runs. They want the whole world to be watching—them. Power to the people and the Sixties dream—moving heaven and earth—are not their ambitions at all.

Gilbert T. Sewall is co-author of After Hiroshima: The United States Since 1945 and editor of The Eighties: A Reader.