Brennan responds to Trump: My principles are worth more than your clearance 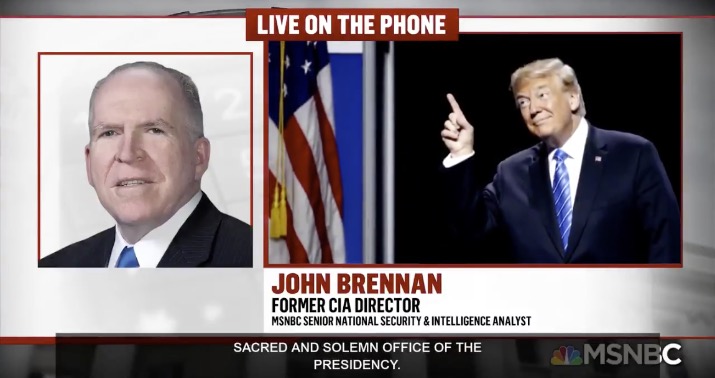 He may have lost his right to view classified material but he’s gained something far more lucrative: Petty martyrdom at Trump’s hands. I’m taking bets. How much will the inevitable John Brennan GoFundMe raise in ResistanceBucks?

Gotta tout your own virtue if you really want to make bank, though. He’s hitting the ground running:

This action is part of a broader effort by Mr. Trump to suppress freedom of speech & punish critics. It should gravely worry all Americans, including intelligence professionals, about the cost of speaking out. My principles are worth far more than clearances. I will not relent. https://t.co/TNzOxhP9ux

Twitter only goes so far, though (unless you’re the president), so he was on the left’s cable news network of choice this afternoon to bask in his new Resistance-martyr glory, replete with a comparison of Trump to foreign tyrants. Watch, then read on.

The Brennan dust-up reminds me of the Omarosa feud, oddly enough, in that both are examples of Trump counterproductively elevating a critic because he couldn’t resist the temptation to take a swing at them. Omarosa will sell more books than she would have but for POTUS’s tweet about her being a “dog.” Brennan will be in higher demand from anti-Trump venues, at least short-term, than he would have been had he kept his clearance. It’s a cinch that he’ll pile up many more followers to his Twitter account, which is already wall-to-wall with blistering attacks on the president. The most effective thing Trump could have done to “silence” him would have been to ignore him. But he’s spent 72 years following a rule of “counterpunching” and it’s brought him wealth and the presidency. Can’t teach an old POTUS new tricks, especially when his old trick has worked so well for him.

It reminds me of the Omarosa thing in another way too:

…really bad things. Nasty to people & would constantly miss meetings & work. When Gen. Kelly came on board he told me she was a loser & nothing but problems. I told him to try working it out, if possible, because she only said GREAT things about me – until she got fired!

Trump’s statement today noted that Brennan lied to Congress while serving as CIA director, which is true. He was also a big cheese at the agency during two of its most notorious intel failures, 9/11 and the Iraq WMD debacle. If you were looking for reasons to punish him symbolically by revoking his clearance, there’s no shortage of professional failings to cite. And yet no one but no one believes that Brennan would have lost his clearance if he’d had “GREAT things” to say about Trump, those failings notwithstanding. All of the people named today by Sarah Sanders in her statement as maybe having their own clearances on the chopping block — Comey, Sally Yates, Susan Rice, Andrew McCabe, Lisa Page, Clapper, Hayden — have antipathy to Trump in common. What lost him his clearance is the same thing that earned Omarosa her White House job, nothing more or less than their respective willingness or unwillingness to flatter the president at length. Given Trump’s fondness for NDAs, I wonder if the next step will be to add nondisparagement clauses to all executive-branch security clearance applications.

One theory popular among Democrats this afternoon for why Brennan’s clearance was revoked today is that Trump is trying to “distract” from the Omarosa trainwreck. (The White House press release announcing the revocation was dated July 26, suggesting they’ve been holding this for awhile.) I don’t buy it. The Omarosa thing doesn’t hurt Trump, really; if Trump needed Brennan as a “distraction” he would have saved this for truly meaningful bad news, like a poor jobs report. I think he finally gave Brennan the hook for no better reason than that Brennan shot his mouth off about how terrible Trump is one too many times and POTUS decided to pull the trigger. He probably wanted to pull it weeks ago and was talked out of it by Kelly or Don McGahn or whoever, which would explain the July 26 date, only to say “to hell with it” after Brennan popped off about him again on Twitter yesterday. Why, ultimately, would Trump ever need a “distraction”? The news cycle moves at light speed now. If he’s momentarily stuck with a bad story on the front page, just wait five minutes. It’ll change.