In Defense of the All-American Road Trip 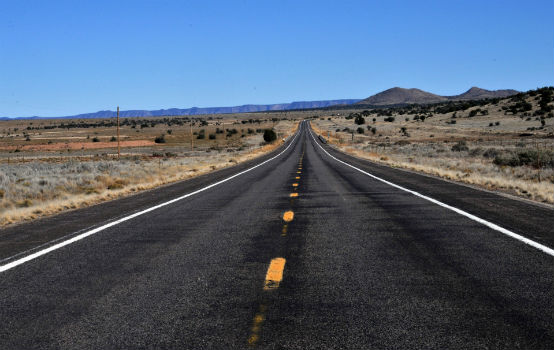 In 1998, I took my first self-driven road trip into the vastness of rural America. No GPS. No destination. No reservations. Just myself, my camera, and a Rand McNally atlas. And it changed the way I think. Twenty years later I’ve seen so much of our great land, but what I haven’t seen is still enough to be a country all its own.

Even back in 1998, at the ripe old age of 24, I was no newbie to road trips. My dad loved to travel: as a family we’d often spend one week every year driving from point to point, seeing different cities and attractions, be it Boston to New York to Philadelphia to D.C., or Mississippi to Texas via I-10. We did it all in a brown 1976 Dodge van that he customized himself, complete with a mini-fridge, table, benches, CB radio, orange running lights, and wall-to-floor shag carpeting. If you’re thinking this sounds like something from a Burt Reynolds movie the likes of Smokey and the Bandit or The Cannonball Run, you’re probably not far off.

While those road trips mostly stopped after my parents divorced in the mid-1980s, the seed was planted. Even as a teenager with a car, I frequently talked my friends into scraping together gas money for a day trip to Chicago or the Indiana Dunes on Lake Michigan, as opposed to cruising the strip in our own town.

In 1998, my junior year in college for photography, I passed up invites to go with friends to Cancun for spring break, and instead bought a brick of 35mm film, gassed up my truck, picked a direction, and drove. That direction was west and the only rule I followed was to take the roads where there were few other roads. That trip brought me from Chicago to Wyoming, down through Colorado to the Four Corners, across New Mexico and Texas, north along I-55 from New Orleans.

Afterwards I began to preach to anyone who would listen that they should skip trips to Europe and theme parks, as there was too much of America to see. “Get there before it’s developed,” I’d say. Little did I know that the 1990s were pretty much the bottoming out of farm labor in America, and not only were the places I fell in love with not going to be overdeveloped, but many would start to disappear.

On that trip, I discovered that Nebraska is beautiful and not as flat as people think. You just need to get off I-80 and explore the rolling sand hills in the central part of the state, or the bluffs in the west. The Nebraska National Forest and Grasslands along State Route 2 is well worth a visit. Watching the sun set there is nothing short of breathtaking, and there’s a better than average chance you’ll have the road all to yourself, sometimes for 20 minutes at a time. From there, where you head is up to you. East will take you to Anselmo, where I suggest grabbing a bite and a beer at Fubar & Grill. Across the street is the town’s historic jail, open for all to enter.

Further down the road you’ll find the town of Broken Bow and the Arrow Hotel, with a lobby that will take you back to a grander time. If you can’t make it to Nebraska, I’d suggest the Lafayette Hotel in Marietta, Ohio; Hotel Manning B&B in Keosauqua, Iowa; the Braun Hotel in Hot Springs, South Dakota; Gage Hotel in Marathon, Texas; and countless others classic hotels in small towns.

North of the Nebraska National Forest is a stretch of road that eventually turns to dirt after you drive through the towns of Purdum and Elsmere. Make sure you fill up on gas before you head out on this almost 90-mile drive, as the next gas station is in Ainsworth. The wide-open views are some of my favorite in this country. Long Lake State Park is a great stop along the way, and if you’re lucky, the one-room schoolhouse, long since abandoned, will still be standing just outside the entrance to welcome you to the park. While I don’t recommend it, I found myself here after dark back in pre-GPS days, and decided to pull over for the night and sleep in my truck. Falling asleep to the smell of the prairie and the sound of the waves splashing on Willow Lake, and waking up to an amazing sunrise, still resonates with me today. It may be about as close as I ever get to what it felt like to be an early pioneer.

If you’re craving more man-made attractions and are in the area around mid-March, be sure to follow Route 20 east from Ainsworth to O’Neil for the state’s largest St. Patrick’s Day celebration. You’ll know you’ve arrived when you see the large painted shamrock on the intersection in the middle of town. However, even if your St. Paddy’s Day timing is off, you can always swing west towards Alliance where you’ll find Carhenge. It’s a junk-car recreation of Stonehenge, so perfect a roadside attraction you almost expect to see Clark Griswold visiting while you’re there. Before you leave Nebraska, hit up Young’s Western Wear in Valentine and pick yourself up a cowboy hat and some boots so you look the part before you head into the Dakotas, Wyoming, or south down to Texas.

I can go on about the list of places I found on that trip in 1998 and in the following 20 years, but I’ll save those for another story. I also want to talk about the places we can’t go back to and how maybe, just maybe, we can make sure to preserve others. The Yellowstone Drug building in Shoshoni, Wyoming, is one of those places. Though it closed in 2012, it was for many visitors on the way to Yellowstone National Park, as much a part of the destination as the park itself.

Located on the main street in this central Wyoming town of 650—no missing zeroes—the entrance sat just off to the side of a building erected in 1905 and a billboard on the block kept a running tally of the number of milkshakes and malts served. With those numbers regularly up in the tens of thousands, it was no wonder the place was routinely packed in the summer months. Sadly, my visit in 2002 was my one and only. I’ve read stories about why the popular soda fountain shop closed its doors, but the fact remains that none of us will be able to experience those creaking hardwood floors, or rummage through the knick-knacks for sale while the staff of mostly teenagers rush about frantically making shakes for travelers from all over.

Luckily for me in 2014, Wyoming gave me another favorite stopping point for ice cream treats when I stumbled upon the Chugwater Soda Fountain. Another classic eatery with an original soda fountain and great malt shakes, it’s a quick exit off of I-25, and well worth the stop on a summer drive. While you’re snacking, look up how the town of Chugwater got its name and what famous Wyoming icon owes its design to a local horse. As one of the few towns in the 170 miles between Cheyenne and Casper, more than a few people low on gas find themselves at the soda fountain asking where the local gas station is (it’s still listed on some GPS devices, but it burned down several years ago). If your tank is low, there is a guy in town who will sell you gas for about $10 a gallon, and while that’s not the best price, at least you can enjoy a tasty shake while you wait.

If you want to find your own Yellowstone Drug or Young’s Western Wear, let me pass along five simple tips.

You’re not going to find many of these places in a guide book, and you for sure won’t be seeing them on any TV travel show. Chances are, if you get out there and see the country in that quintessentially American way that only a road trip can deliver, you might find that it changes the way you think about your vacations as well.

Vincent David Johnson is a Chicago based photojournalist, filmmaker, and the person behind the Lost Americana documentary project.