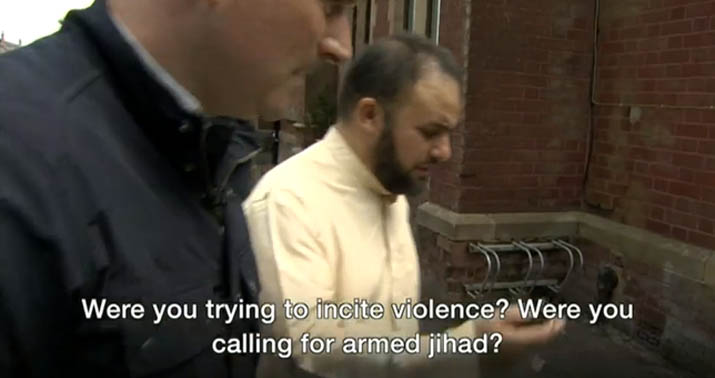 Last May a suicide bomber named Salman Abedi blew himself up at after an Ariana Grande concert in Manchester, England, killing 22 people and injuring over 100 others. Abedi and his family had attended the Didsbury Mosque in Manchester. Today, the BBC reports that in December 2016, six months before the bombing, an imam named Mustafa Graf gave a sermon praising armed jihadism. It’s not known whether Abedi was in attendance that day, but we do know that 10 days later that he bought a ticket for the Ariana Grande concert:

Abedi and his family regularly attended the mosque and his father sometimes led the call to prayer.

“We ask Allah to grant them mujahideen – our brothers and sisters right now in Aleppo and Syria and Iraq – to grant them victory,” Mr Graf is heard saying.

Elsewhere it says: “Lots of brothers stayed behind unfortunately. They love Islam and Muslims but they do nothing for the support of their brothers and sisters.”

Another passage says: “Jihad for the sake of Allah is the source of pride and dignity for this nation.”

Of course, we’ve all heard many times that “jihad” means “struggle” and doesn’t necessarily imply armed conflict. To be certain they weren’t misinterpreting the sermon’s content, the BBC gave the complete recording to two Islamic experts to get their take on it. Both concluded that the sermon was definitely talking about armed jihad and encouraging people to take drastic action:

Mr Hasan, head of Islamic studies at Quilliam, a think tank that focuses on counter-extremism, said: “From the context and the way these texts [the religious passages quoted within the sermon] are used they are clearly referring to military jihad, to armed jihad.

“I have known the Islamic discourse for pretty much 40 years, from being a child in this country and worldwide, and the mujahideen are the group fighting armed jihad.”

Mr Rehan said he was in no doubt about what the sermon meant.

“The jihad he’s referring to here is actually being on the battlefield, there’s no ifs and no buts in this.”…

Mr Rehan said: “He’s giving them the narrative of them against us. He is psychologically and practically brainwashing young people into either travelling or to do something to take action.”

The BBC has an excellent video report in which they attempt to confront the imam and ask him about his sermon. He refuses to speak to them on camera. You’ll have to click over there to watch it as it isn’t on YouTube yet. BBC also reports that 5 men who attended the mosque have traveled to Syria to fight with ISIS, though again the mosque denies this.

After the attack last year, the mosque made a public statement about the “atrocity” and held a moment of silence for the victims. Imam Mustafa Graf was present for this statement. You can see him introduced in this clip:

Not surprisingly, one of the people who have condemned the teaching at Didsbury mosque is Tommy Robinson. Last year after the bombing