More Questions on Nellie Ohr – Was She Behind the Creation of the Fusion Dossier? And Did She Work for Fusion, the CIA and the FBI?

More Questions on Nellie Ohr – Was She Behind the Creation of the Fusion Dossier? And Did She Work for Fusion, the CIA and the FBI? 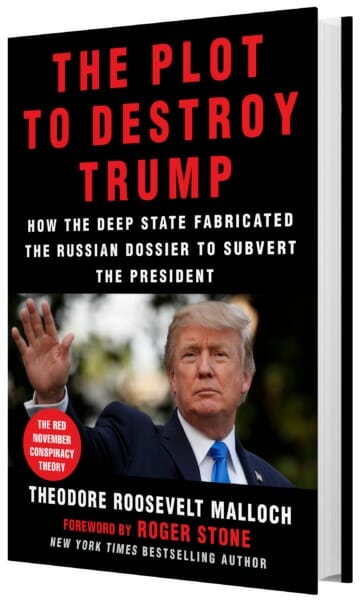 We reported on yesterday the all-out efforts to protect Nellie Ohr from being connected to the Spygate scandal.

Was she the creator of the fake and slanderous Trump – Russia dossier and “the heart of our hunt for Red November?”

As we reported yesterday, according to Zero Hedge, the head of opposition research firm Fusion GPS admitted in December 2017 in a court filing that his firm paid the wife of a senior Justice Department official to help dig up damaging information on then-candidate Donald Trump.

Glenn Simpson, co-founder of Fusion GPS, filed the signed declaration in a D.C. court this week affirming that Nellie Ohr, wife of demoted DOJ official Bruce Ohr, was contracted by Fusion through the summer and fall of 2016 “to help our company with its research and analysis of Mr. Trump,” according to the filing. The House Intelligence Committee determined that in November 2016, Simpson met with Bruce Ohr shortly after the election to discuss their findings regarding Russia and Trump. Bruce Ohr lost his senior-level position at the DOJ as associate deputy attorney general after his meetings with Simpson and British spy Christopher Steele, who assembled the Trump-Russia dossier, were discovered.

And why would Fusion GPS hire Nellie Ohr? Aside from the obvious connection to her DOJ husband who was in a position to provide Fusion GPS with information on Trump gathered by US intelligence agencies, Nellie Ohr also represented the CIA’s “Open Source Works” group in a 2010 “expert working group report on international organized crime” along with Bruce Ohr and Glenn Simpson.

The connections between Nellie Ohr and the ‘Spygate’ scandal were hidden at a distance for months.

Last week at TGP, we reported on a report at American Spectator by Diana West about Nellie Ohr, who West referred to as “the “dossier” spying scandal’s woman in the middle.”

To one side of Ohr, there is the Fusion GPS team, including fellow contractor Christopher Steele. To the other, there is husband Bruce Ohr, who, until his “dossier”-related demotion, was No. 4 man at the Department of Justice, and a key contact there for Steele.

As central as Nellie Ohr’s placement is, her role in the creation of the “dossier” remains undefined. For example, the House Intelligence Committee memo on related matters vaguely tells us that Nellie Ohr was “employed by Fusion GPS to assist in the cultivation of opposition research on Trump”; the memo adds that Bruce Ohr “later provided the FBI with all of his wife’s opposition research.” Senator Lindsey Graham more sensationally told Fox News that Nellie Ohr “did the research for Mr. Steele,” but details remain scarce.

West also revealed the men in her life are protecting Nellie Ohr from exposing her involvement in the Russia scandal:

Notably, the “dossier” men in her life have tried to shield Ohr from public scrutiny, even at professional risk. Her husband, as the Daily Caller News Foundation reports, failed to disclose his wife’s employment with Fusion GPS and seek the appropriate conflict-of-interest waiver, which may have been an important factor in his demotion from associate deputy attorney general late last year.

Under Senate and House questioning, Fusion GPS co-founder Glenn Simpson consistently failed to disclose Nellie Ohr’s existence as one of his firm’s paid Russian experts, let alone that he hired her for the red-hot DNC/Clinton campaign Trump-Russia project.

Even Christopher Steele may have tried to keep Nellie Ohr “under cover.” Steele, put forth as the “dossier” author ever since its January 2017 publication in BuzzFeed, does not appear to have let on to his many media and political contacts that he had “dossier”-assistance from at least two fellow Fusion GPS Russian experts, Nellie Ohr and Edward Baumgartner. Baumgartner, interestingly, was a Russian history major at Vassar in the 1990s when Nellie Ohr taught Russian history there.

Additional information has now been uncovered written by Theodore Roosevelt Malloch, in his book The Plot to Destroy Trump – How the Deep State Fabricated the Russian Dossier to Subvert the President.

The FBI, as we now know, was given the first installment of the dossier as early as July 2016 and got additional chapters as they were developed. That timing suggests a long enough period for the FBI to verify and find the dossier either credible or not.

The FBI is supposed to be a safeguard of good government and the protector of the rule of law. It is the nation’s federal police force, and therefore it should not be tainted, corruptible, or biased. It should be objective, fair, honest, and trustworthy. The public depends on it.

As a result of its politicization, however, the FBI itself has earned a tarnished reputation and has lost much of its former credibility.

As new information continues to pour in from the House Intelligence Committee about what exactly the FBI knew, what they claim they didn’t know, and what they intentionally kept hidden from the public, consider these new revelations about FBI agent Nellie Ohr and her husband Bruce Ohr, the FBI agent contracted by Glenn Simpson of Fusion GPS. It turns out the Nellie was more than just an extra hand here, another point-of-contact for Fusion. In fact, it seems that she may have had a heavy hand in the creation of the dossier. In a memo released by the House Intelligence Committee, Nellie Ohr was “employed by Fusion GPS to assist in the cultivation of opposition research on Trump.” The memo continues to detail how Bruce Ohr “later provided the FBI with all of his wife’s opposition research.” So, what exactly was Nellie’s role? Is she no longer this peripheral figure as we previously assumed? Is she at the heart of our hunt for Red November? Could Nellie have been right in the middle, the one actu- ally completing the research for Steele?

A larger question looms: when and how did the FBI learn that Nellie worked for Fusion GPS? And why did they stall to release this information?

More curiously, new information has been leaked regarding Bruce. As we know, he met with Glenn Simpson before the election, but now it seems he also met with Simpson after the election. Why? Was it to get their story straight after Clinton lost? Or was it to recalibrate their plot to subvert President Trump?

Malloch classify’s Nellie Ohr as an FBI Agent.  Clearly she did all she could to provide the FBI the fake dossier.  It’s unknown if she is currently paid by the FBI or the CIA but she clearly worked for the CIA in 2010 and clearly worked to provide the dossier to the FBI beginning in 2016.  Is this why the men in Nellie’s life did all they could to prevent Nellie Ohr from being outed for being involved in the dossier because she also has links to the FBI, the CIA, and therefore to Brennan and by association, his boss, President Obama.

We now know that communist sympathizer Nellie Ohr, and the men who surrounded her, her husband, business partners, John Brennan, and by association President Obama, were all connected. Together they attempted to prevent Candidate Trump from being elected and later to remove duly elected President Trump from office.