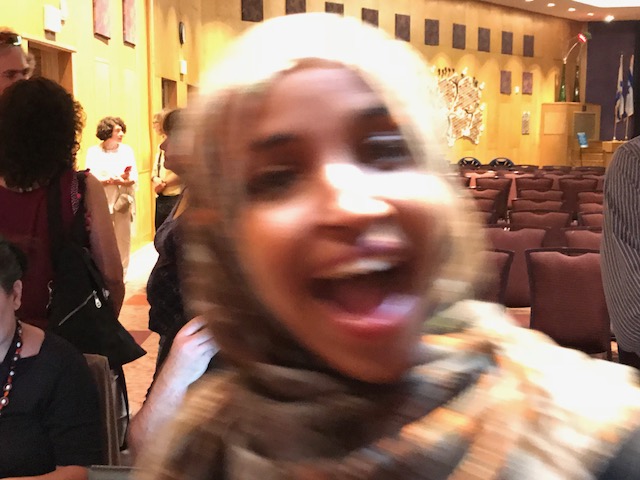 When I went downtown to the studio yesterday to appear for a segment on Tucker Carlson Tonight, I thought that Tucker wanted to draw me out on the points I made about Keith Ellison in my Weekly Standard column on Wednesday. In the column I asserted that the domestic abuse allegations against Ellison were the least of his disqualifications from office. Taking advantage of his news sense, Tucker only wanted to talk about the abuse allegations. It’s a good thing for me that John had covered them on Power Line. Otherwise I would have been caught short.

Tucker also wanted me to talk about Ilhan Omar, Ellison’s successor-to-be as Minnesota Fifth District representative in Congress. I came to the tentative conclusion two years ago that she was likely married to her brother for some dishonest purpose in 2009 and was still married to him at the time. And he was husband number 2. She held out another man — husband number 1 in time — as her current husband and father of her children.

When the story made its way into the Star Tribune, Omar treated it as a crisis. She used the services of a crisis manager to craft a statement or two addressing the story and then refused to answer questions about it. She has adhered to that position for the past two years. In the meantime, Preya Samsundar advanced the story for Alpha News and, last week, David Steinberg nailed it down in an intensely reported investigative piece for PJ Media.

Steinberg worked on the story over a period of months from his perch in New York. He posted screenshots of relevant documents and photographs to support his report. Rereading his report yesterday afternoon, I was struck by the lucidity of Steinberg’s reportage. In its own way it is a brilliant piece of work.

When I started writing about the story two years ago, Omar was on her way to election as a lowly state representative in the lower house of Minnesota’s legislature. I nevertheless thought it was an interesting political and media story. Fortunately for me, my friends at City Journal gave me all the space I needed to present the story to their readers in “The curious case of Ilhan Omar.”

Now only the formality of Omar’s election this November stands before Omar’s rise to the Congress of the United States. More than anything else last night I wanted to credit David Steinberg for his dogged work in reopening the curious case of Ilhan Omar in advance of Tuesday’s DFL primary, but I forgot. If you haven’t yet given careful consideration to Steinberg’s “State Rep. Ilhan Omar (D-MN) Swore to Apparent Falsehoods in Court — While Divorcing Her Alleged Brother,” please check it out.

If you have any acquaintances at the Star Tribune, you might want to ask them why the paper has let this story rest. I will only add that I believe the reporters who have worked must know there is good reason to follow up. There is a reason she refuses to answer their questions or submit to an interview on the subject.