Can America Ever Come Together Again? 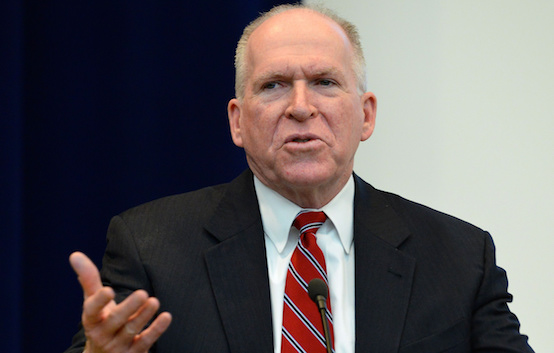 If ex-CIA director John Brennan did to Andrew Jackson what he did to Donald Trump, he would have lost a lot more than his security clearance.

He would have been challenged to a duel.

“Trump’s…performance in Helsinki,” Brennan had said, “exceeds the threshold of ‘high crimes & misdemeanors.’ It was…treasonous.”

Why should the president not strip from a CIA director who calls him a traitor the honor and privilege of a security clearance? Or is a top-secret clearance an entitlement like Social Security?

CIA directors retain clearances because they are seen as national assets, individuals whose unique experience, knowledge, and judgment may be called upon to assist a president in a national crisis.

Not so long ago, this was a bipartisan tradition.

Was it not the former heads of the security agencies—CIA, FBI, director of national intelligence—who have been leveling the kind of savage attacks on the chief of state one might expect from Antifa?

Are ex-security officials entitled to retain the high privileges of the offices they held if they descend into cable TV hatred and hostility?

Former CIA chief Mike Hayden, in attacking Trump for separating the families of detained illegal immigrants at the border, tweeted a photo of the train tracks leading into Auschwitz.

“Other governments have separated mothers and children” was Hayden’s caption.

Is that fair criticism from an ex-CIA director?

Thursday, the New York Times decried Trump’s accusation that the media are “the enemy of the people.”

“Insisting that truths you don’t like are ‘fake news’ is dangerous to the lifeblood of democracy. And calling journalists ‘the enemy of the people’ is dangerous, period,” said the Times.

Fair enough, but is it not also dangerous for a free press to be using its First Amendment rights to endlessly bash a president as a racist, fascist, sexist, neo-Nazi, liar, tyrant, and traitor?

The message of journalists who use such terms may be to convey their detestation of Trump. But what is the message received in the sick minds of people like that leftist who tried to massacre Republican congressmen practicing for their annual softball game against Democrats?

And does Trump not have a point when he says the Boston Globe-organized national attack on him, joined in by the Times and 300 other newspapers, was journalistic “collusion” against him?

If Trump believes that CNN, MSNBC, the New York Times, and the Washington Post are mortal enemies that want to see him ousted or impeached, is he wrong?

We are an irreconcilable us-against-them nation today, and given the rancor across the ideological, social, and cultural chasm that divides us, it is hard to see how, even post-Trump, we can ever come together again.

Speaking at a New York LGBT gala in 2016, Hillary Clinton said: “You could put half of Trump’s supporters into what I call the basket of deplorables…racist, sexist, homophobic, xenophobic, Islamophobic. …Some of those folks…are irredeemable, but…they are not America.”

When Clinton’s reflections on Middle America made it into print, she amended her remarks. Just as Governor Andrew Cuomo rushed to amend his comments yesterday when he blurted at a bill-signing ceremony: “We’re not going to make America great again. It was never that great.” America was “never that great”?

Cuomo’s press secretary hastened to explain: “When the president speaks about making America great again…he ignores the pain so many endured and that we suffered from slavery, discrimination, segregation, sexism, and marginalized women’s contributions.”

Clinton and Cuomo committed gaffes of the kind Michael Kinsley described as the blurting out of truths the speaker believes but desperately does not want a wider audience to know.

In San Francisco in 2008, Barack Obama committed such a gaffe.

Asked why blue-collar workers in industrial towns decimated by job losses were not responding to his message, Obama trashed such folks as the unhappy losers of our emerging brave new world: “They get bitter, they cling to guns or religion or antipathy to people who aren’t like them or anti-immigrant sentiment or anti-trade sentiment as a way to explain their frustrations.”

These clingers to their Bibles, bigotries, and guns are the people the mainstream media, 10 years later, deride and dismiss as “Trump’s base.”

What Clinton, Cuomo, and Obama spilled out reveals what is really behind the cultural and ideological wars of America today.

Most media elites accept the historic indictment—that before the Progressives came, this country was mired in racism, sexism, homophobia, and xenophobia, and that its history was a long catalog of crimes against indigenous peoples, Africans brought here in bondage, Mexicans whose lands we stole, migrants, and women and gays who were denied equality.

Those who cheer Trump believe the country they inherited from their fathers was a great, good, and glorious country, and that the media who detest Trump also despise them.

For such as these, Trump cannot scourge the media often enough.