Seymour Hersh and the Disappearing Iconoclast 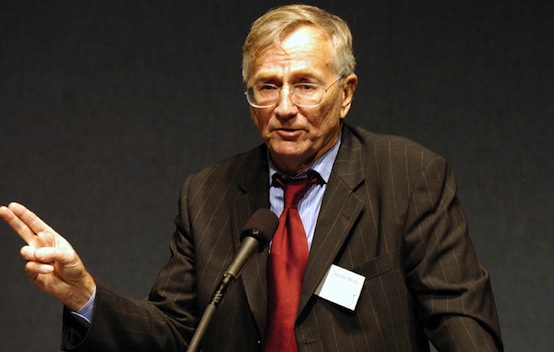 When people are comforted by government lies, trafficking the truth becomes hellishly difficult. Disclosing damning facts is especially tricky when editors en masse lose their spines. These are some of the takeaways from legendary Seymour Hersh’s riveting new memoir, Reporter.

Shortly before Hersh started covering the Pentagon for the Associated Press in 1965, Arthur Sylvester, the assistant secretary of defense for public affairs, berated a group of war correspondents in Saigon: “Look, if you think any American official is going to tell you the truth, then you’re stupid. Did you hear that? Stupid.” Hersh was astonished by the “stunningly sedate” Pentagon press room, which to him resembled “a high-end social club.”

Hersh never signed on to that stenographers’ pool. He was soon shocked to realize “the extent to which the men running the war would lie to protect their losing hand.” Hersh did heroic work in the late 1960s and early 1970s exposing the lies behind the Vietnam War. His New Yorker articles on the My Lai massacre scored a Pulitzer Prize and put atrocities in headlines where they remained till the war’s end.

Hersh’s 1974 expose on the CIA’s illegal spying on Americans helped spur one of the best congressional investigations of federal wrongdoing since World War II. (Many of the well-written reports from the Senate Select Committee to Study Governmental Operations with Respect to Intelligence Activities remain regrettably relevant to the Leviathan in our time.) By the late 1970s, despite revelations of CIA assassinations and other atrocities, Hersh was chagrined that “[n]o one in the CIA had been prosecuted for the crimes that had been committed against the American people and the Constitution.” Welcome to Washington.

Any journalist who has been hung out to dry will relish Hersh’s revelations of editors who flinched. After Hersh joined the Washington bureau of the New York Times, he hustled approval for an article going to the heart of foreign policy perfidy. Bureau chief Max Frankel finally approved a truncated version of Hersh’s pitch with the caveat that he should run the story by “Henry [Kissinger] and [CIA chief] Dick [Helms].” Hersh was horrified: “They were the architects of the idiocy and criminality I was desperate to write about.” A subsequent Washington bureau chief noted that the Times “was scared to death of being first on a controversial story that challenged the credibility of the government.”

After Hersh exited the Times, snaring high-profile newshole became more challenging. When he pitched a piece to the New Yorker on the turmoil and coverups permeating the 1989 U.S. invasion of Panama, editor Robert Gottlieb told him to “go for it.” But as Hersh was exiting Gottlieb’s office, the editor added: “Sy, I just want you to know that I don’t like controversy.” Gottlieb had the wrong dude. Elsewhere in the book, Hersh slams a gutless specimen at Life magazine, “If there is a journalism hell, that editor belongs there;” he also clobbers the Times business section’s “ass-kissing coterie of moronic editors.” On the other hand, throwing a typewriter through a plate glass window would perturb even the paper’s non-moronic editors.

Despite superb demolitions by Hersh and other reporters, the credibility of government agencies soon revived like a salamander growing a new tail. After Nixon was toppled, “the pendulum had swung back to a place where a president’s argument that national security trumps the people’s right to know was once again carrying weight with editors and publishers,” Hersh noted. A few weeks before the 9/11 attacks, New York Times columnist Flora Lewis, wrote that “there will probably never be a return to the… collusion with which the media used to treat presidents, and it is just as well.” But the collapse of the World Trade Center towers made the media more craven than at any time since Vietnam. Washington Post Pentagon correspondent Thomas Ricks complained that, in the lead-up to the U.S. invasion of Iraq, “There was an attitude among editors: ‘Look, we’re going to war, why do we even worry about all this contrary stuff?’”

Hersh’s career revived after 9/11 with a series of New Yorker exposés on the lies, failures, and shenanigans of the War on Terror. He soon “began to comprehend that 8 or 9 neoconservatives who were political outsiders in the Clinton years had essentially overthrown the government of the United States—with ease.” Hersh eventually concluded that “America’s neocons were a menace to civilization.” But, with the exception of his explosive work on Abu Ghraib and the torture scandal, his articles rarely received the attention they deserved. Hersh’s reports on the war on terror have been far more accurate and prescient than the vast majority of the stories touted by cable news, but he is rarely credited for his foresight.

In recent years, Hersh has been criticized for writing articles that rely too heavily on too few, and not altogether authoritative sources. After his articles on the killing of Osama Bin Laden (he presented an alternative scenario that questioned the Pentagon’s version of events) and  White House claims about a 2013 Syrian chemical weapons attack were rejected by American publications, he published them in London Review of Books and has continued to publish his gumshoe reporting there and in places like Germany’s Welt am Sonntag. In his book, Hersh declares that “insider sources” are “what every reporter needs.” But some of the sources he now relies on  may have long since retired or no longer have access to 24 karat insider information.

There are some excellent investigative journalists at New York Times, USA Today, and elsewhere, but the most visible media venues have often ignored the most potentially damning stories. The mainstream media continues to pursue Russian collusion in the 2016 presidential campaign like Captain Ahab chasing Moby Dick. At the same time, they almost completely ignore how U.S. government manipulations are paving the path to war with Iran. Most of the American media coverage of the Syrian civil war has been appalling, touting a fairytale of terrorist extremists as freedom fighters, and ignoring the flip-flops and contradictions in U.S. policy. In a 2013 interview, Hersh derided the American media’s fixation on “looking for [Pulitzer] prizes. It’s packaged journalism so you pick a target like are railway crossings safe and stuff like that.”

Reporting nowadays rarely penetrates the Leviathan’s armor. Fourteen years after Hersh broke Abu Ghraib, many of the details of the post- 9/11 torture scandal remain unrevealed. Could anyone imagine Liuetenant William Calley, who was convicted of mass murder for the 1968 My Lai carnage, subsequently becoming a favorite media commentator on military ethics, foreign policy, and democracy? No. But the main culprits in the torture scandal and coverup—from George W. Bush and Dick Cheney, to former CIA chief John Brennan—are all regularly touted these days as founts of wisdom. The veneration of Bush, Cheney, and Brennan is one of the starkest measures of the failure of journalism in our time.

Hersh’s Reporter has plenty of tips for journalists willing to vigorously hound government wrongdoing. But finding good venues for smoking guns may be more difficult now than ever. As Assistant Pentagon Secretary Sylvester scoffed at reporters in that 1965 Saigon briefing, “I don’t even have to talk to you people. I know how to deal with you through your editors and publishers back in the States.” Unfortunately, there are too many editors and publishers who would rather kowtow than fight.

James Bovard is the author of Lost Rights, Attention Deficit Democracy, andPublic Policy Hooligan. He is also a USA Today contributor. Follow him on Twitter @JimBovard.