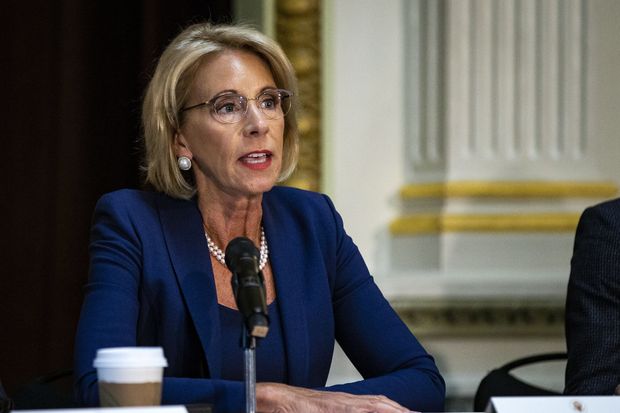 The Trump Administration’s regulatory rollback continues to be overshadowed by the White House circus. In case you missed the news late last week, the Education Department is moving to reverse two Obama rules that would have cost taxpayers tens of billions of dollars and diminished education options for students who can’t afford tuition at Stanford or Georgetown.

is proposing to repeal the Obama Administration’s 2014 “gainful employment” rule, which was the tip of the left’s spear against for-profit colleges. Under the rule, colleges whose graduates have annual debt payments exceeding 8% of their income would lose federal student aid. Team Obama had grabbed the 8% threshold from a 2006 research paper on mortgage eligibility standards, which the authors acknowledged had no “particular merit or justification” as a gauge of manageable student debt.

calculated based on the department’s College Scorecard that 15.5% of programs at public and 41.5% at nonprofits would have failed the test. When Mrs. DeVos proposed applying the rule to all colleges, nonprofit and public colleges howled.

Colleges noted, among other things, that the metric would punish schools that enroll large numbers of low-income students who take out more debt and those whose graduates choose lower-paying jobs in public service. Many college programs could also be forced to close during recessions as wages dip even as demand for vocational training increases.

Mrs. DeVos has good reason to scrap the rule and is soliciting public comment on adding more granular data to the College Scorecard on student outcomes. This would allow a prospective student to compare the expected earnings of, say, a psychology major at the local community college to a DeVry cyber-security graduate.

If colleges intentionally mislead students, they would be held accountable under the department’s proposed revisions to the Obama “borrower defense” rule. After driving the for-profits Corinthian and ITT Technical Institute out of business, the Obama Administration established a haphazard process for discharging loans of students left in the lurch.

In their final days, Obama regulators expanded loan forgiveness to all students who claimed to have been duped. Like the gainful employment regulation, the “borrower defense” rule eviscerated due process. Students didn’t have to prove they were harmed by a college’s alleged misrepresentations—or that they were intentional—to obtain relief. Nor could colleges dispute student claims though they could be dunned for discharged loans. The rule also pleased plaintiff attorneys by banning class-action arbitration waivers.

Mrs. DeVos late last month proposed applying the same standards and procedures that courts use to adjudicate fraud claims. To discharge loans, borrowers would have to show a college made a misrepresentation with knowledge of “its false, misleading, or deceptive nature or with a reckless disregard for the truth.” Colleges will still be liable for intentional deception.

Liberals say these due process protections will prevent students from obtaining relief. But the Education Department is demonstrating it will hold colleges—regardless of their tax status—accountable by investigating Temple University’s business school for allegedly goosing its US News & World Report rankings with false test scores.

The department explains that its “goal is to enable students to make informed decisions prior to college enrollment, rather than to rely on financial remedies after the fact when lost time cannot be recouped and new educational opportunities may be sparse.” Credit to Mrs. DeVos for prioritizing student welfare over ideological hostility to “profit.”