Chicago Has Another Bond for You 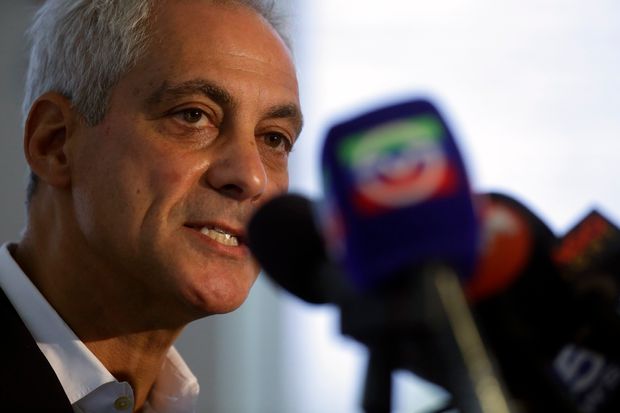 If Chicago politicians applied as much cunning to solving their fiscal problems as financially engineering their way out of them, the city would be a triple-A credit.

Last year we wrote about Chicago’s scheme to reduce its borrowing costs by floating low-interest-rate bonds securitized by sales tax revenue. Investors snapped up the bonds, which fetched a triple-A rating from Fitch and yields as low as 2.22%. By comparison, Chicago’s junk-rated general obligation bonds landed above a 6% yield.

But junk by any other name is still junk, and Chicago’s finances have continued to erode even as property taxes soar to pay for pensions that remain woefully underfunded. Last year the city smacked homeowners with a 10% increase and this year they will have to pay 2.75% more. Mayor

is preparing to run for re-election next year, and he’d rather not raise taxes again.

So he’s now considering a plan by

CEO of asset management firm GCM Grosvenor, to issue $10 billion in bonds to backfill the city’s pension funds. The details will have to be worked out, but the idea is to transfer the investment risk from workers and retirees to creditors while exploiting interest-rate arbitrage.

Chicago would presumably issue the bonds at a lower rate than the 7% expected return on its pension fund assets. Over time this would supposedly add to pension fund assets. In the short term, dumping $10 billion into the pension funds would also reduce the city’s annual pension payments since liabilities would appear to be smaller.

Caveat, creditors. The cities of Detroit and Stockton and San Bernardino in California defaulted on their pension obligation bonds in Chapter 9 bankruptcy. Stockton’s bond insurers got 50 cents on the dollar. Puerto Rico in 2008 issued $3 billion in pension bonds. But Congress in 2016 passed legislation allowing the commonwealth to wriggle out of those obligations. Hedge funds have sued the federal government and are demanding that U.S. taxpayers bail them out.

Like those other pension bonds, Chicago’s version would also have to be financed every year out of city revenues. A chunk of sales tax revenue is already earmarked for other bonds. If revenues shrink in the next recession, pension bondholders would compete with city services for payment priority. Who do you think wins if the city has to start laying off police officers to pay bondholders who have been getting 5% or 6% a year?

Investors might be willing to take these political risks if they can snatch a hefty enough interest-rate premium. And if they haven’t learned from the experience of Detroit and Puerto Rico, they will deserve whatever political haircut they eventually get.