“Enemies lists,” then and now 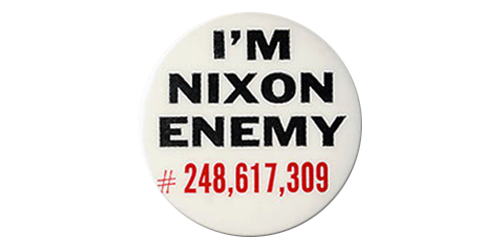 The Trump-hating mainstream media claims that President Trump has an enemies list. It’s possible that he has one, but the list of people whose security clearance is under review isn’t it. An enemies list would be longer and would include, for example, Jim Acosta. The list in question is simply a group of people who may not deserve the privilege of having a security clearance now that they are not in government.

Calling the list an “enemies lists” has its uses, though. It enable aging liberals to gloat about being on Nixon’s enemies list — the real thing. And it enables the Trump-hating mainstream media to push the Trump-as-Nixon theme.

Here is the reality about presidents and their enemies: (1) every president has them, whether on a list on not; (2) only a stupid president doesn’t know who they are; (3) people who get themselves elected president aren’t that kind of stupid.

The people whose security clearance is under review are certainly enemies of Trump. Are their folks Trump wrongly perceives to be his enemies? I don’t now. There may be because Trump may view anyone who criticizes him or fails to act as he wants as his enemy. For example, he may now regard Jeff Sessions as his enemy, even though Sessions is not. But I’m just speculating.

Does Trump take unfair action against his enemies? Not, as far as we know, in the ways Nixon contemplated doing. Nor in the ways the Obama administration actually did.

There’s no evidence, for example, of adverse action by the IRS against Trump’s enemies. There is no indication of desire to use the sexual proclivities and practices of his enemies against them, as Nixon’s team seems to have contemplated. On a trivial note, Jim Acosta still is able to harass the president and his press secretary at press events.

Trump has revoked the security clearance of one enemy, John Brennan, with a few more such revocations possibly to follow. And it’s quite possible that his action was punitive. But there was a sound basis for revoking Brennan’s security clearance, and is for some of the others on that list, as well. In any event, the revocation of a security clearance is nothing like having the IRS come after you.

So far, Trump seems largely content with attacking his enemies in tweets, perhaps as a means of blowing off steam. The result is rarely presidential, but it is far from Nixonian.