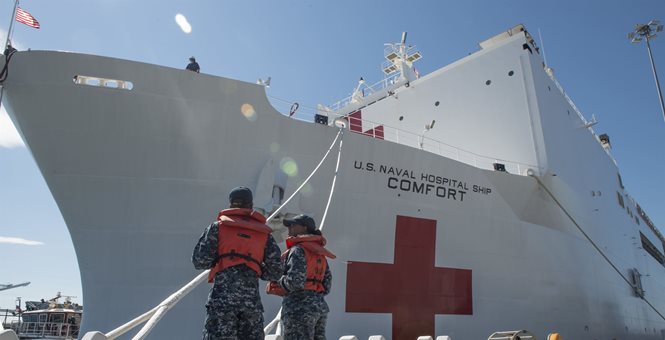 As Venezuela continues to collapse, the Venezuelans fleeing the desperate situation are putting unmanageable demands on neighboring countries. The South American countries most affected are Columbia, Ecuador, and Peru. Brazil is also affected, though to a lesser extent. There are simply too many refugees for these countries to accommodate.

Defense Secretary Jim Mattis toured several of the countries feeling the strain last week. On the return flight to Washington, D.C., he told the reporters onboard that the USNS Comfort, a hospital ship, will be dispatched to Columbia on a strictly humanitarian mission. A timeline was not mentioned but it is assumed to be in the next few weeks.

“It is absolutely a humanitarian mission,” he told reporters returning with him to Washington after a six-day tour of South America. Mattis visited Brazil, Argentina, Chile and Colombia to assess military relations between the U.S. and South America.

Mattis would not say when the USNS Comfort would arrive off the coast of Colombia, but it apparently will not be in the next few weeks. Dana W. White, the chief Pentagon spokeswoman, said it would be “in the fall,” but she would not be more specific.

Venezuela blocks aid from U.S. groups so another way must be used to help those in need. The United States has helped out by sending money but this is a departure from the Trump policy, which has been mostly hands-off with a looming threat of the possibility of military intervention.

The decision to deploy U.S. medical troops to the worst migration crisis in South American history is a significant departure from Trump administration policy. Defense officials have left the response to civilian and international humanitarian relief organizations to deny Venezuelan President Nicolás Maduro the possibility of casting it as a U.S. military intervention in the region.

So far, the United States has provided at least $55 million in overall assistance, something defense officials have emphasized particularly since President Donald Trump announced last summer that he was not “ruling out a military option” to solve the Venezuelan crisis.

Mattis met with Columbia’s new president Friday and the two began work on the mission’s logistics. It is also possible that a sister ship, Mercy, may be called upon to help.

But Friday, Mattis met with Colombia’s new president and defense minister, and was offered specific suggestions “on how we might best craft the cruise through the region.” That means “going back to the drawing board” before announcing the destinations and timetable, he said. It had yet to be decided, for example, whether the hospital ship would treat Venezuelans on the Atlantic side of the Panama Canal or to the south in the Pacific, a move that might allow the U.S. health care workers to also treat spillover Venezuelan refugees into Ecuador.

If the U.S. pursued that plan, it left open the possibility that the Pentagon would send out the hospital ship Mercy, Comfort’s sister ship, whose home port is in San Diego.

This will be welcome news for those suffering without medical care and medicine. The plight of Venezuelans to cope with everyday life continues to worsen. While an expired passport is overlooked in Columbia as Venezuelans migrate into the country in search of food and medicine, then go back home to Venezuela, Ecuador and Peru have now tightened their passport requirements for the migrants. The Columbian response was immediate and not supportive.

Authorities in Peru announced Friday that they will follow Ecuador’s recent decision to require Venezuelans reaching the border to enter with a passport, a document that has grown increasingly difficult to obtain in Venezuela.

The decision drew an immediate rebuke from authorities in Colombia, which has become a gateway for hundreds of thousands of Venezuelans leaving their homeland. Many are crossing through the Andean nation on their way to other places in Latin America.

Though his own country already imposed its own often ignored entry requirements for Venezuelans, Colombia Migration Director Christian Kruger warned that the new passport rule in neighboring Ecuador could create a bottleneck at the Rumichaca International Bridge connecting the two countries. Officials estimate over 4,000 Venezuelans crossed from Colombia into Ecuador each day over the bridge earlier this month.

I’ll end with a couple of tweets from a freelance reporter in Bogata.

“We need them to fix this problem. They can’t close the door on us. In Cúcuta (Colombia) our (expired) passports worked fine. We haven’t eaten well in three days.” —Former police officer stranded by Ecuador’s new passport requirements for Venezuelan migrants pic.twitter.com/sNK0tL6KJC

This family sold their TVs & washing machines, collected money from family abroad and paid $215/person for bus passage direct to Peru. Today they arrived at the Ecuadorian border to find it closed to Venezuelans without passports. They’ll sleep in the street tonight. pic.twitter.com/xESEP5BS4L