A Shot of Competition for EpiPen 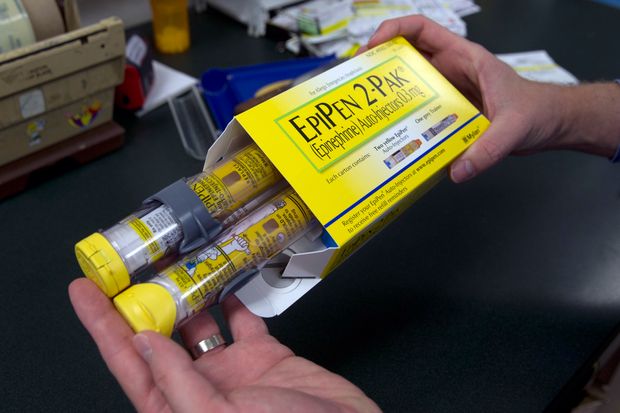 A couple of years ago Washington fell into anaphylactic shock over the high cost of EpiPens, devices that shoot adrenaline into someone having an allergic reaction. But the Trump Administration this week injected some overdue competition into the market that could lower prices for millions of Americans.

EpiPen. The competing drug is manufactured by the Israeli pharmaceutical company Teva. One might wonder why a simple spring device filled with a cheap medicine didn’t have competitors, even decades after invention.

That was one question in 2016, when Congress hauled in Mylan CEO

to register outrage about the more than $600 list price of a two-pack of pens, which millions of kids and adults have to keep on hand. Not everyone pays full price after rebates and discounts, and some of the shock came from insurance designs that increased out-of-pocket costs. But the sticker price had increased more than 500% over 10 years.

Ohr, the Justice Department’s man of mystery. Plus, Trump strips Brennan on his security clearance.

Yet if Mylan kept prices high, the company had help from the FDA. The agency had not articulated standards for a class of drugs known as “complex generics” such as inhalers, which are more fraught than proving similarity to, say, a molecule pill. Mylan thus had no direct competition, though it now sells its own generic copy.

Other injectors are on the market but a pharmacist can’t substitute these versions thanks to issues as minor as the instructions for the device, though there is no clinical distinction. Companies like Teva have spent years ensnared in FDA processes, and in the meantime Mylan could increase prices without market consequences.

Before he became the current FDA Commissioner,

told Congress in 2016 about the “Catch-22” for drugmakers: They couldn’t win approval as a generic because another injection device wasn’t exactly the same as EpiPen, but other regulations also make it hard for competitors to get branded alternatives through the FDA’s new drug approval pathway.

Dr. Gottlieb has made clarity for such complex generics a priority at the FDA, and on Thursday he called the Teva device approval part of the agency’s efforts to remove barriers to competition. The approval is particularly timely amid supply shortages of EpiPens.

On all the evidence, products face the sharpest price decline when two generics are competing with the branded version. More drugmakers will jump into a market if they see an opportunity to make money and a regulatory agency that doesn’t construct needless barriers to entry.

At the time of the EpiPen brouhaha,

called for a federal “consumer response team” that would rove around and penalize companies for price spikes. The laugh-cry moment is that the Trump Administration has flirted with a response from the Clinton playbook: Importing price controls from Europe for drugs with expired patents that lack competition.

President Trump seems to think that drugs are too expensive because of unfettered markets, but the EpiPen episode is a reminder: The real culprit is often not too much freedom but big business exploiting big government to keep prices high.