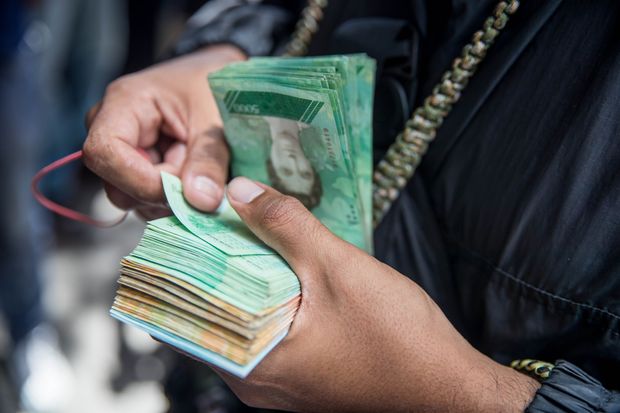 A man counts money to buy ice lollies during a protest of healthcare workers in Caracas, Venezuela, Aug. 16.

This promises to be quite a week in Venezuela. President

is rolling out his economic recuperation plan, which is supposed to rescue the once-wealthy nation from the economic damage that socialism has delivered. But on the evidence of the plan Mr. Maduro announced Friday, Venezuela could be in for a monetary meltdown.

The main feature of the Maduro plan is a giant devaluation. The new fixed rate for what he calls the “strong bolivar” is 6,000,000 to the dollar. The preferential price from the central bank had been 4,000,000 to the dollar. If all those zeros make your head spin, fear not. On Tuesday the government will launch a new currency, the “sovereign bolivar.” It will contain five fewer zeros, so it will be pegged at 60 to the dollar.

As monetary face-lifts go, this looks like a back-alley job. Venezuela is in the throes of a hyperinflation that economist

says has surged to another all-time high of 61,463% on an annual basis. The International Monetary Fund says inflation could reach 1,000,000% this year. The new bolivar rate, which is closer to the black market rate, is an attempt to stop the price spiral and restore confidence in the currency.

The problem is that the same people will be running the central bank, and they’ll still answer to Mr. Maduro, who on Friday also decreed an increase in the minimum wage of 6,000%. For those holding the ID card of Mr. Maduro’s United Socialist Party, the government will pay a bonus equivalent to 600,000 old bolivars. Perhaps the money to pay for the bonus will come from printing more bolivars.

Mr. Maduro also declared that there will be a nationwide price freeze, date uncertain. Venezuelan businesses have been laboring under price controls for years, but there have been mechanisms for small adjustments. It isn’t clear how strict the new price controls will be, but good luck to businesses trying to pay the new minimum wages when they can’t raise prices.

Even Mr. Maduro seems to understand that this is a problem, so he has declared that the government will pay the wage increases for small- and medium-size businesses for 90 days. Some of that cash will come from raising the value-added tax in September to 16% from 12%, if there’s much of anything left of the economy beyond the black market.

Not surprisingly, hyperinflation has led to an acute shortage of cash to perform even basic transactions. Gasoline stations, buses and many informal markets require cash, but small change is difficult to find. Adjustments under the new currency using old bills will mean sharp price increases for everyday business.

All of this adds up to a full-blown financial panic and the breakdown of economic order. Mr. Maduro has destroyed confidence in the country’s institutions and currency, and his new plan will make it worse. The only way to stop the descent into chaos might be to dollarize the economy. Meantime, be prepared for the worst as the people and capital of a degraded nation flee the wages of socialism.