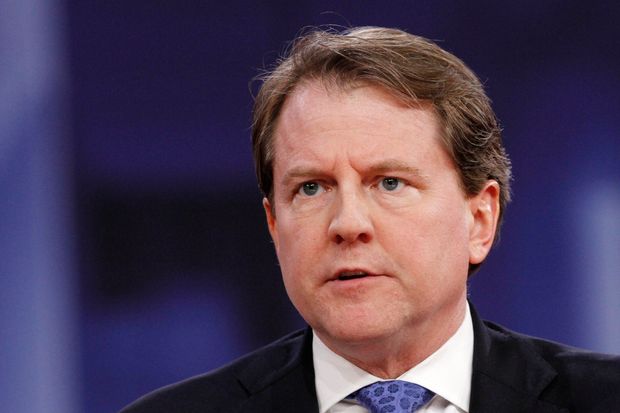 has a credibility problem, but so do the media. A case in point is the weekend story that White House counsel

has cooperated with special counsel

Let’s try to navigate through this Beltway Hall of Mirrors.

The thesis of the New York Times story is that Mr. McGahn cooperated in a way that could hurt Donald Trump in order to protect himself and because he doesn’t trust the President. This fits the media narrative that Mr. Trump is covering up his collusion with Russia and his obstruction of justice, and thus Mr. McGahn must be scrambling to save himself.

Yet lost in the resulting tempest is a crucial fact that appears to contradict this spin: Mr. Trump had to waive executive privilege for Mr. McGahn to cooperate with Mr. Mueller.

Mr. McGahn is not Mr. Trump’s personal attorney, so attorney-client privilege isn’t at issue. But as White House counsel Mr. McGahn represents the Presidency. He is a careful enough lawyer to advise Mr. Trump that agreeing to answer Mr. Mueller’s questions would waive executive privilege. And the Times reports that Mr. McGahn’s attorney,

said on the record that Mr. McGahn cooperated only after Mr. Trump waived any privilege claim.

This in turn meant that Mr. McGahn would have to answer all of Mr. Mueller’s questions. Once privilege is waived, Mr. McGahn couldn’t decide to answer, say, what Mr. Trump told him about Attorney General Jeff Sessions but refuse to discuss the President’s state of mind when he fired

at the FBI. Without invoking privilege there is no legal basis for Mr. McGahn to refuse to answer a question.

This isn’t what you’d expect if Mr. Trump is leading a coverup.

grand jury.Yet when Mr. Trump doesn’t invoke privilege for his White House counsel, he gets no credit.

Could it be that Mr. Trump let Mr. McGahn cooperate with Mr. Mueller because he felt he had nothing to cover up? This is precisely what Mr. Trump tweeted Saturday: “I allowed him and all others to testify – I didn’t have to. I have nothing to hide.”

Because Mr. Trump makes so many false statements, this claim is also assumed to be false—though legal logic and the public evidence suggest that in this case it may be true. Keep in mind that Mr. Trump’s lawyers cooperated extensively with Mr. Mueller for months, turning over tens of thousands of documents—also without claiming executive privilege.

In recent months, as the Mueller probe has dragged on, Mr. Trump has turned to denouncing it as a “witch hunt.” His lawyers now fear that letting the President talk to Mr. Mueller’s team, as Mr. Trump has said he wants to do, could be walking into a perjury trap. This is a rational fear, but the lawyers are still negotiating with Mr. Mueller.

Mr. McGahn has been one of the President’s most effective advisers—notably on judicial nominations. But some in and outside the White House resent his influence and might want to portray him as undermining Mr. Trump. The bottom line is that readers should remain skeptical about what is reported about Mr. Mueller’s probe, waiting to see the evidence he actually produces.