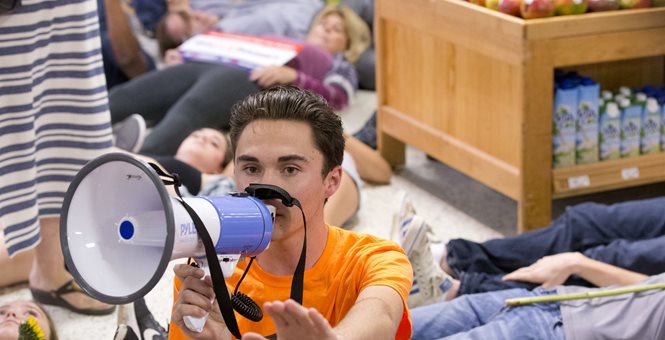 There’s simply no need. By the time he’s eligible to run, President Avenatti will have already confiscated all of America’s guns.

[I]f he could design his future without any obstacles, he would go to college in the fall of 2019, “read a shitload of books,” then take some time off in 2020 to work on a presidential campaign. (Certain candidates have already approached him, he told me.) Then, after college, he would prepare for his congressional run. “I think I’ve come to that conclusion,” he says. “I want to be at least part of the change in Congress.”

In the past five months, Hogg has developed political opinions on just about everything. He is against charter schools and for universal health care. He is obsessed with Mueller’s investigation and especially the indictment of Maria Butina, the alleged Russian spy who infiltrated the NRA. He believes that Alexandria Ocasio-Cortez is “a future president of the United States.” He is interested in the idea of placing age limits on politicians. “The reason Republicans are successful right now is because they’re empowering young people,” he told me, pointing out that Paul Ryan was 45 when he became Speaker of the House. “Older Democrats just won’t move the fuck off the plate and let us take control. Nancy Pelosi is old.”

He’ll make a fine VP for President Ocasio-Cortez. Incidentally, this may be the first time I’ve heard of the GOP cited as some sort of party of the young. Ryan’s young, it’s true; it’s also true that the Democratic House leadership is famously decrepit. Trump was 70 when he was elected, though, the oldest elected first-term president in history. Mitch McConnell is 76. The GOP’s base is notoriously old, as is the Fox News demographic. (All cable-news viewers trend old, in fairness.) Entire books have been written about the leftward trend among America’s youth.

But Hogg knows a good self-serving talking point when he sees one. He has the instincts of a politician, at least:

The young people will win

In the next 5 years, I envision having at least one young person for every Congressman and Senator in the United States to make sure they are including young people in their policy decisions.

His 2025 campaign is going to be “Wild in the Streets,” basically.

Another bit from the New York magazine profile of him. I don’t know what to do with this paragraph, but I do know that it helps if you read all of the quotes in Owen Wilson’s smarmiest faux-sincere voice:

At one point this summer, I asked him if he was ever tempted by all the attention from girls his age. “No,” he answered. “They think they know me, but they only know the me that I choose to put out there. Emma and Delaney, and the people in our group — they know me. I may be a teenage boy and a walking hormone, but I just care about everybody.” Later that evening in Orange County, at a bonfire on the beach, Hogg was talking to half a dozen girls who were looking for advice on how to organize anti-gun movements at their schools. He talked about the way women get shafted at work and in culture. “Promise me you won’t take anybody’s shit,” he said. It was as teen-earnest as a John Hughes movie. Then he looked around at the blackness, the beach, the waves. “Beaches are a place for a mass shooting,” he said. “I hate to bring that up.”

Anyway. Probably time to start recruiting an opponent for him in 2025, no? Given how Hogg grates on the GOP base, his challenger might end up as the best-funded Republican House candidate in the country. I assume Kyle Kashuv is available. Exit quotation from the future congressman: “We really only remember a few hundred people, if that many, out of the billions that have ever lived. Is that what I was destined to become?”