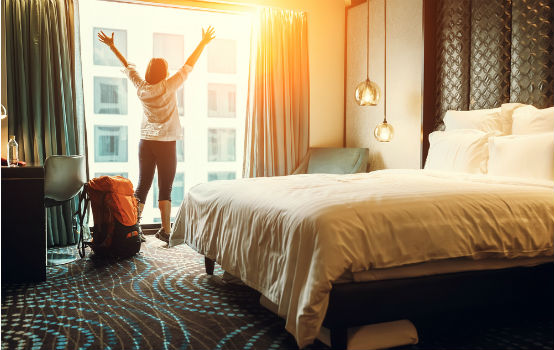 A couple of weeks ago, a digital publication called The Outline ran an eye-opening article on pretty but cheap “microhotels” catering to Instagram-savvy Millennials. It’s one of those pieces, like journalist Lauren Smiley’s magnificent 2015 essay on the “shut-in economy,” that underscores just how precarious life is becoming for young people in America and how little it resembles the old American Dream.

Two things about these hotels’ marketing stand out: a focus on technology at the expense of service staff (“Millennials like to be plugged in!”) and an attempt to provide more common and quasi-private spaces at the expense of room size (“Millennials like community!”). There’s also the plain old dopey and patronizing: Hilton’s attempt at the economy microhotel, a brand new chain called Tru, plasters the words “Wow,” “Ooh,” “Bam,” and “Win” all over its lobby. The lobby is even divided into “four zones for working, lounging, playing, and eating and drinking.” Perhaps you get a timeout if you do the wrong thing in the wrong zone.

Like Seamless, which once produced an ad that read “Because Pad Thai,” or Buzzfeed, with its emoji reactions, these hotels seem to have taken seriously a style that Millennials often adopt ironically or in self-parody. At this rate it’s not hard to imagine an in-hotel convenience shop called “Adulting.” Judging by the reactions in web forum discussions, more than a few Millennials feel offended and infantilized by this kind of advertising.

While the hotel industry may have been innovating behind the scenes over the decades, hotels for a long time have looked and felt more or less the same. Like airport terminals, there is a deeply entrenched and consistent “hotel style”; just as a diner is a diner and a department store is a department store, a hotel is a hotel. Some may mourn the fact that there are so few Frank Lloyd Wright-designed hotels in America, and others may miss the quirky, tacky neon jungles of the old resort strips. But they still take comfort in the familiar hotel style.

I am probably not alone in feeling some affection for the generic, stodgy, could-be-anywhere aesthetic of the mid-range suburban hotels, brands like Hampton Inn, Hilton Garden Inn, Holiday Inn Express, and the lower-tier Marriotts. There’s something welcoming about it all: the elegant but overbuilt lobby furniture, durable in a way that nothing in the consumer market is; the overpriced room service menu and plain old American restaurant; the fresh but definitely-not-homemade cookies in the lobby; the “local” or “welcome to X” prints hanging behind the desk, the only indication that you’re in any particular place at all; the perfectly appointed yet soulless guest room, packed with rarely used amenities like ironing boards and bathrobes. I could rail against the McDonaldization of hotels, or I could wonder why the phones and alarm clocks usually look like they were manufactured in 1985, or I could inquire how many people really use the massive work desk. But I also like all of those things, because they suggest a level of indulgence and redundancy, of unnecessary but pleasing service.

The microhotels, the Trus and the “boutique” ripoffs, do not provide service. They attempt to shave every last amenity down to the barest essentials, to trim every bit of fat, to realize every last “efficiency.” They bring to mind WeWork spaces and TaskRabbit jobs and Ikea-furnished dorm lounges and plain-cardboard Amazon purchases and customer service lines staffed by robots and the transience and insecurity and dislocation of life in the gig economy.

One thing, however, can be conceded: not much socializing or community-building takes place in a Marriott or Hilton lobby, despite those Hilton Garden Inn commercials about flirting at the bar. But it doesn’t follow from this that the Millennial microhotels are some kind of innovation. In fact, it’s a good example of how small mom-and-pop businesses have been doing, organically and cheaply, what major brands can only do in awkward imitation. Consider the old mom-and-pop motels. At least when they were relatively new, they provided the same basic but sufficient guest rooms as the cosmetically hip economy hotels, plus they often had adjacent diners, bars, or pools. More genuine socializing probably occurred in any given motel diner than in every kindergarten-playroom Tru lobby in America. I’m willing to bet there were a few pool tables and other games in some of those old motel lobbies. Heck, this pleasant looking motel in West Virginia even has a mini-golf course! Compared to the Instagrammable microhotel, the motels were more fun, more social, less expensive, and enriched their local economies through local ownership.

One wonders how successful this industry trend will really be: how many people will mistake the microhotel for anything other than a dressed-up barebones motel? Its one trick is that stylish and attractive low-end products are relatively rare. There are no Ford Focuses with Ford Mustang bodies. The boutique economy segment may attract some interest then, if it can market itself as a “Focus in a Mustang body.” Millennials may give the concept a try; older travelers who grew up with roadside motels may recognize the “boutique microhotel” exactly for what it is, and opt either for a real motel or a real hotel.

My father is always surprised when I’m interested in things like flip clocks and fluorescent desk lamps—or motels for that matter. For him, they were nothing more than everyday bits of mass consumer culture. To me, they are new (in the sense that I may not be familiar with them) or “retro.” Given the trend towards analog and retro and vintage, one wonders whether actual, new-construction motels built in the retro style wouldn’t be a better investment in the Millennial market than experiments like Tru. New midcentury-style motels are already being built, in fact, but so far in small numbers. That’s a trend to watch. In the meantime, I’ll stick with the Nestle cookies in the soulless lobby.

Addison Del Mastro is assistant editor of The American Conservative. He tweets at @ad_mastro.