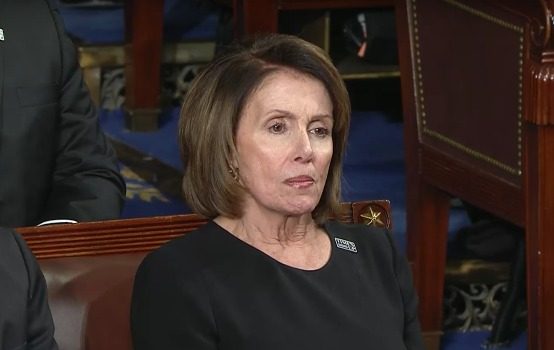 Most of the commentary surrounding the 2018 midterm election season is—surprise, surprise—about Donald Trump. After every special election, whether a Democrat wins or a Republican, prognosticators and pundits habitually steer the conversation towards what the result says about Trump’s longevity. A loss by a Republican in a district Trump won in 2016 is packaged as a political win for the Democrats. And a GOP win in a competitive race is interpreted as a blow to the Resistance movement.

But the 2018 midterms are not all about Trump. There is another senior politico whose record is on the ballot: House Democratic Leader Nancy Pelosi.

The San Francisco native is everything the modern Republican Party hates. She’s from the West Coast, representing one of the most liberal states in the country. She helped push the Affordable Care Act across the finish line in 2010 without a single GOP vote. She raises boatloads of cash for Democratic candidates and progressive causes: a source told CNN that Pelosi has raised $91 million for the Democratic Congressional Campaign Committee in this election cycle, a pile of cash that would make the Clintons envious. And she led Democrats back into the House majority in 2006 after 12 years in the political wilderness.

A lot of younger Democrats, however, are firmly of the opinion that it’s time for a change. Pelosi has been at the top since 2002, the longest tenure of a Democratic party leader since Sam Rayburn. She has outlasted all of her contemporaries on the Republican side: John Boehner and Dennis Hastert are long gone, and Paul Ryan is retiring at the end of the year. Her record as a vote counter is second to none, as evidenced by her having guided health and bank reform legislation into law.

But to the younger generation, those like Seth Moulton, Tim Ryan, and Linda Sanchez, Pelosi exemplifies the the old way of doing things. While they won’t say it openly on television, they think the California lawmaker is past her prime. They’d like nothing more than for Pelosi to hand over her baton and enjoy her golden years back in the Golden State. This feeling was percolating in parts of her caucus as far back as 2010, when Democrats got humiliated during the midterm elections. Six years later, an obscure rank-and-file congressman from Ohio named Tim Ryan challenged Pelosi and won about a third of the House Democratic vote. Ryan may try again in the fall.

Pelosi’s ostensible allies are also joining the chorus, however mutedly. Congressman Jim Clyburn of South Carolina, the third ranking House Democrat, told The New York Times last week that he was interested in running for the top leadership post if Pelosi decides to retire or step down as leader. At 78, Clyburn is not exactly a representative of the next generation. But if Democrats win the House majority and Clyburn runs with Pelosi’s blessing, he would make history as the first African-American speaker.

Pelosi is used to surviving, so she dismisses all this as the murmurings of mutinous brats who are too inexperienced to understand how the House works. Asked by Rolling Stone whether she was concerned about the growing calls for her to step aside, Pelosi essentially laughed at the question: “I’m not worried about that. And I’m certainly not worried about them.”

She may yet pay for being so smug. While no one would dispute her bona fides as a liberal icon or talented party leader, more than four dozen Democrats running for office this year want to see a change in leadership, and nearly half of Democrats surveyed by The Hill newspaper want Pelosi to be replaced. Two high-profile House Democratic candidates—Conor Lamb in Pennsylvania’s 18th district and Danny O’Connor in Ohio’s 12th—distanced themselves from Pelosi during their special election races like she was the Black Plague.

Yet if Democrats run the tables this November and recapture the House, Pelosi is likely to get a second stint as speaker. Once a party triumphs in an election, its members tend to unify and pick the person best equipped to fight the other side. But if Democrats bomb like they did in 2010, 2014, and 2016, and wake up after the midterms to two more years as the minority party, the anti-Pelosi faction will have much more leverage to push for a reordering of leadership. If that were occur, even a master legislator like Nancy Pelosi would struggle to keep her caucus together.