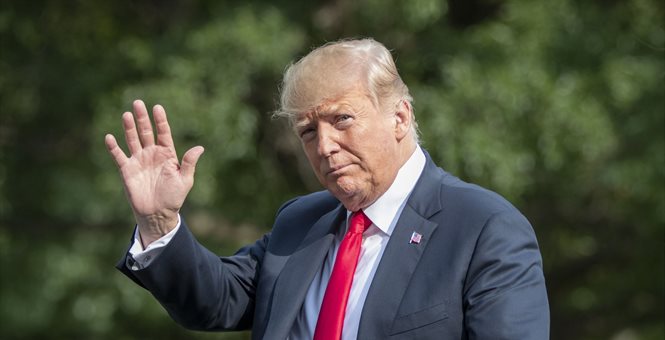 I mean, I think it’s trolling.

After a week of critics blasting him for treating natsec clearances as a royal privilege, unfit for those who would speak ill of the king, here he is last night confirming that read — half-jokingly, maybe, but only half. Whether you keep your clearance depends in part on whether you say nice things about the president and his allies.

Just watched former Intelligence Official Phillip Mudd become totally unglued and weird while debating wonderful @PARISDENNARD over Brennan’s Security Clearance. Dennard destroyed him but Mudd is in no mental condition to have such a Clearance. Should be REVOKED? @seanhannity

Even James Clapper has admonished John Brennan for having gone totally off the rails. Maybe Clapper is being nice to me so he doesn’t lose his Security Clearance for lying to Congress!

There are few perfect things in life but POTUS referring the question of whether an ex-CIA officer should keep his government natsec access to Fox’s 9 p.m. guy is one of them. As for Clapper, if lying to Congress bothers Trump why didn’t he revoke his clearance along with Brennan’s? “Lying to Congress” is a great neutral justification for yanking someone’s privilege to receive classified info, even if no one really believes that’s why he and Brennan have landed on POTUS’s sh*t list. Trump could have nuked both of them on those grounds last week. Instead he’s letting Clapper linger seemingly for no better reason than that Clapper’s criticism of the president is lower-key than Brennan’s is. Which, again, suggests that there’s only one truly disqualifying act in Trump’s mind, and that’s being harsh towards him personally.

Does that also explain why he hasn’t (yet) nuked Obama’s intel privileges? The New Yorker report from last night is wrong, he insists:

Fake News, of which there is soooo much (this time the very tired New Yorker) falsely reported that I was going to take the extraordinary step of denying Intelligence Briefings to President Obama. Never discussed or thought of!

Obama has stayed quiet about Trump over the past 18 months, never criticizing him directly (although sometimes indirectly). If — if — it’s true that he’s not on the security-clearance sh*t list, that’s probably why. It could also be that Trump is holding Obama’s intel privileges in reserve, in anticipation that O will eventually start throwing roundhouses at him this fall and that he can blow his privileges up later in retaliation. It’s inconceivable that he’s not going to come after Obama somehow before his term is up, knowing how much Republican voters would enjoy it. He can’t win a fight with Admiral McRaven but he can sort of “win” by going after the right’s least favorite ex-president, even realizing that he’ll get clobbered by non-righties for being unpresidential in doing so.

Clapper’s not the only natsec pro who’s less than thrilled with Brennan mouthing off about Trump, incidentally. That’s not because they fear losing their clearances, it’s because they fear Brennan making the intel community look every inch the hyper-politicized “deep state” that Trump is forever accusing them of being. More from the New Yorker:

Other intelligence veterans fell in the middle, citing concerns that personal attacks fuelled distrust of the C.I.A. as an institution. “John, I understand why you’re doing what you’re doing,” a former intelligence official told me, summing up the views of several of Brennan’s former colleagues on the private e-mail chain. “I understand why you feel so strongly about it. I get it. I actually feel the same way. What you write resonates with me. But I worry about the impact on the President’s perspective of current intelligence officers. It confirms his biases. It reinforces his theme that there’s a ‘deep state’ and that the ‘deep state’ is out to get him. It is actually helpful to him in solidifying his base.”…

“I don’t think he’s being very effective or serving the country well,” [Dennis] Blair, the former director of National Intelligence, told me of Brennan’s confrontational approach to Trump. But Blair said that he signed the letter because he believed the former C.I.A. director “had a right to say what he said.”

If Trump really wants to troll people, he should make that his baseline for revoking clearances. “It’s only because I love the intelligence community so very much that I must punish those whose vulgar politicking brings it into disrepute.” Republican IC people who want to tear into Trump’s enemies will be exempt from that rule, natch.

Here’s the segment between Phil Mudd and Paris Dennard that Trump mentioned in his tweet. “Unglued” is not too strong a word in this case, or really in any case involving Mudd. He plays the role of “deep state” cartoon villain even more often than Brennan does.