Will Jeff Flake Finish Blessing The Rains Down In Africa Soon? 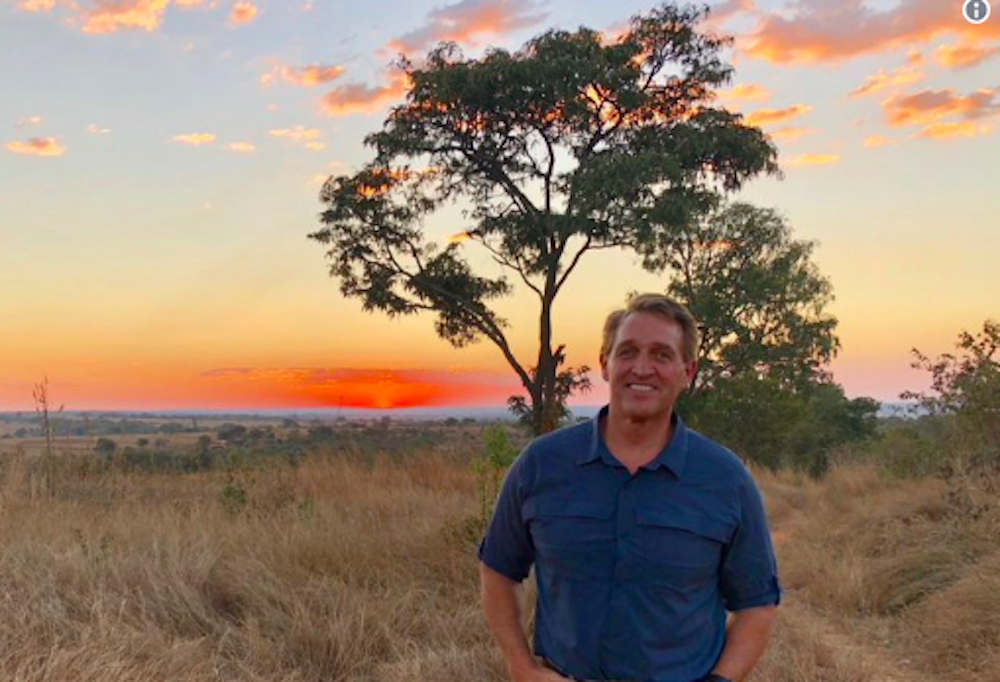 Sen. Jeff Flake (R-Arizona) has been in Africa for nearly a month and he’s been telling different people different things about when exactly he’s planning to return to Washington D.C.

Flake, who is not seeking re-election this November, spent some time in Zimbabwe serving as an election observer. This is all well and good (democracy FTW!) except that Sen. Mitch McConnell (R-Kentucky) cancelled the Senate’s August recess in an effort to push through Donald Trump’s judiciary nominees, and Flake sits on the key Senate Judiciary Committee. Well, he would, if he were in town.

As Haley Byrd of The Weekly Standard reported last week, Flake and a few other Republican senators decided to play hooky last week, and their actions put the GOP in a bind. Their absence made it impossible for Republicans on the committee to reach a quorum, which requires nine votes. Their absence has effectively held back the process to get Trump’s nominees to the Senate floor by at least two weeks.

Here is the upshot of what Flake is doing:

Mitch McConnell kept the Senate in session in August (instead of recessing), so they could confirm Trump's judicial nominees, but Flake took his own recess for most of August. He's on judiciary, so now they can't confirm the judges. https://t.co/cTyPFgrGMM

Update: 18 days later, Jeff Flake is still in Africa. Like I said he would be. https://t.co/V3cns0I0kQ

While the blame for last week’s debacle doesn’t lie entirely at Flake’s feet, it should be noted that Flake has given conflicting information about when he will return from this trip. In late July, he told MSNBC that he’d be gone for three weeks, but then told a Politico reporter via text he would be back for the week of August 13.

Flake is known for his foreign junkets, often on taxpayers’ dime. As The Federalist noted last year:

Flake has taken more than a dozen trips to Cuba. Shortly after becoming a senator in January 2013, he was off to Cuba with a large group of very liberal congressional Democrats. He returned to Cuba in November 2014, then again in December 2014, August 2015, and March 2016…

Cuba was not his only foreign destination. In his first months in the Senate he took taxpayer-funded trips to Israel, Afghanistan, Italy, Cape Verde, South Africa, and Argentina. In May 2013, instead of spending the Memorial Day recess in Arizona trying to rescue his tanking popularity, he took off for a week’s stay on a desert island in the Pacific with his kids, in something of a publicity stunt…

In August 2014, he took off for another vacation on a deserted Pacific island, this time with Democratic Sen. Martin Heinrich of New Mexico…

Despite multiple attempts to get an answer from his Washington D.C. office about his latest in-office foreign tour, no one on Flake’s staff has updated this reporter on the senator’s whereabouts or when he plans to get back to work. They’ve yet to explain why the Arizona senator has told reporters conflicting information about his date of return, and there is yet no word on whether the lame-duck Flake will give up his coveted committee position to someone who will show up and actually vote.

Flake could resign or be forcibly removed from his spot on the congressional arm that approves or rejects the president’s nominees bid to get to the Senate floor for a vote. But that hasn’t happened yet.