Are We in the Midst of Another Counter-Enlightenment? 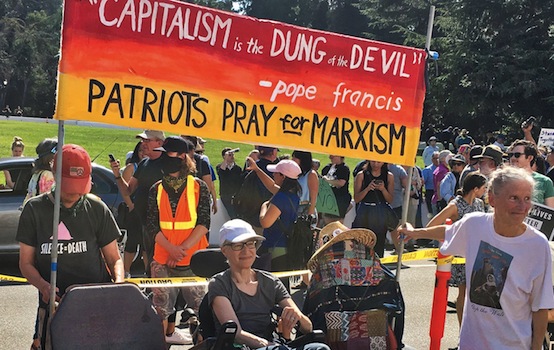 Can what remains of the status quo survive? Does it deserve to? These are always pertinent questions, of course, and recently the brooding dynamics of change were posed in a thoughtful way by Jacob Siegel, writing in Tablet.

In his piece, “The Dirtbag Convergence,” Siegel argues, “Behind the convulsions and confusion of the Western political landscape there is an unspoken alliance between two seemingly hostile camps. Populists and anti-humanists have entered into an ad hoc coalition in their fight against the liberal establishment.”

Of course, the “alliance” is more of what political scientists call an “objective alliance,” that is, two sides that hate each other nonetheless find themselves working against a common enemy—which they hate even more.

As Siegel notes, in 2017, an alt-right blog, The Daily Stormer, accused an alt-left podcast, Chapo Trap House, of ripping off its material. The two antithetical portals, Siegel explains, actually shared much in common, even beyond their splenetic hostility to Hillary Clinton and other establishmentarians. That is, they shared a style, which Siegel described as “antic cleverness and vitriol with a bleaker undercurrent.” Thus “the far left and far right converge around an axial opposition to hegemonic liberalism.”

Siegel’s argument summons to mind a famous 1948 op-ed by Arthur M. Schlesinger, Jr., “The Vital Center.” Taking aim at both fascists and communists, Schlesinger wrote, “Right and Left…should be conceived, not in terms of a line, but in terms of a circle.” Indeed, he added, “the main target of both totalitarian extremes must be the Center—the group which holds society together.” Schlesinger ended with a hopeful conclusion: the path forward was a “democratic middle way, which unites hopes of freedom and of economic abundance.”

We might observe that back in the ’40s, Schlesinger was fully confident that his brand of New Deal/Fair Deal liberalism was up to the task of upholding the Vital Center against all comers. (The following year, he enlarged his article into a book.) And indeed, the strong economy of that era, broadly shared among the classes, energized small-d democrats in both parties.

Yet in our time, the condition of liberal centrism, in the U.S. and in the West more broadly, has been weakened. The big reason, Siegel argues, is that the last quarter century has “been an era in which national and global economies were remade in ways that have allowed wealthy capital owners to capture the large majority of economic productivity gains, creating in-country inequalities not seen since the late 19th century.”

To be sure, such declarations are hotly disputed in many quarters. Yes, it’s true that inequality has risen, and yes, it’s also true that many areas have been de-industrialized, depopulated, and demoralized. Yet at the same time, the standard of living for all has vastly improved. Mere statistics don’t begin to capture the value of—to name just three examples—the polio vaccine, air conditioning, and GPS.

Still, as recent election results—from Donald Trump 2016 shock to Alexandria Ocasio-Cortez’s more recent victory—show us, the political toll on the status quo is evident: the Vital Center has been de-vitalized. And here Siegel is helpful—maybe even a bit gleeful—in laying the blame at the feet of the once-vital establishmentarians. As he puts it, a “hyperliberal, oppositional politics of the New Left…has captured much of the Western ruling class,” thereby vitiating its ability to do good. Such a ruling class, we might add, seems less interested in Schlesingerian “freedom and economic abundance” for all, and more interested in punitive political correctness and green-inspired austerity—at least for the dreaded working class.

As a result of its own self-negation, the liberal establishment, Siegel says, “is uniquely unprepared to defend itself at a moment of massive transformation of the basic material conditions on which liberalism is based.”

So where does all this lead? Interestingly, Siegel makes brief mention of Isaiah Berlin, the 20th-century Oxford don who wrote much about an earlier backlash against liberalism, what became known as the Counter-Enlightenment.

If we can decamp back a couple of centuries, we will remember that the Enlightenment of the 18th century gave us such towering Age of Reason figures as Thomas Jefferson, Adam Smith, and Voltaire. Yet in life, as in physics, every action has an opposite reaction, and so it was with the Enlightenment. And if the Counter-Enlightenment of the 19th century is less well known, that’s in part because it’s often known by other names, such as romanticism or, more broadly, nationalism. These are heavy terms, bearing much historical weight: our reckoning of nationalism, of course, is hopelessly tangled up with memories of the world wars of the 20th century.

So now, from the perspective of the 21st century, we have to wonder whether rough beasts have been loosed. And as it happens, years ago, this author also wrote about Isaiah Berlin and the Counter-Enlightenment, albeit in a different context—the Middle East. In the Jerusalem Post in 2003 and in the Huffington Post in 2006, the argument was made that U.S. military interventions, most notably in Iraq, were inevitably stirring up the forces of backlash. That is, instead of promoting democracy, as the Bush 43 administration had hoped to do, the U.S. was instead summoning nationalist and religious demons. Not long thereafter, the rise of ISIS and anti-democratic fervor in countries such as Turkey vindicated that foreboding. (Alas, both articles seem to have been lost in their original form; here’s a new link to the text of both.)

Turning to the West, the question on the table is this: should today’s backlash against centrist liberalism—including the revolt against such isms as globalism and neoliberalism—be seen in such stark terms? Are the socioeconomic forces that have been unleashed in our midst today in any way comparable to the counter-enlightenments of Mittel Europe or the Middle East?

Alas, Isaiah Berlin is no longer around to help render a judgment; he died in 1997.

For his part, Siegel seems pessimistic. He laments that “a hard-won American ethos of tolerance and respect for the individual [has] devolved into a progressive-plutocrat alliance that characterizes the worst of the neoliberal dispensation, and is loathed by much of the country. It produces a backlash.”

Some would say that the backlash is already here. In the U.S., we’ve had plenty of rumblings, and yet the D.C.-based conventional wisdom still insists that the center will hold, that the Democrats will stymie Trumpian Republicans in the upcoming midterm elections, even as they simultaneously put a lid on Ocasio-Cortezian leftists. Are the Democrats—joined, of course, by the mainstream media and other allies—really strong enough to do all that? We’ll know soon enough.

In the meantime, whatever one thinks of populist insurgents on the right and left—and whether they are seen as paradigm shifters or just hiccups—there are other phenomena around the world to be considered.

For instance, in Europe, there’s the gathering political rebellion against the dictates of the European Union, most notably on immigration. That rebellion, we might note, has extended beyond the Visegrád countries; it now includes Austria, Italy, and Malta.

So can the center hold? That exact question was asked back in 1919 by the poet William Butler Yeats. In “The Second Coming,” Yeats offered his dire answer, and he was soon enough vindicated, calamitously and tragically.

A century later, the centrists of today will have to see whether they can do better—if, that is, they are able to see at all.