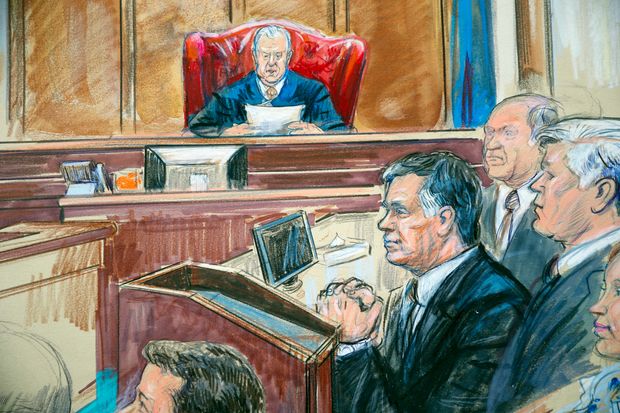 The jury conviction of Paul Manafort and the guilty plea by Michael Cohen on Tuesday are a damaging commentary on the shady operators Donald Trump associated with in his private and political life. Whether they also pose a fatal threat to his Presidency is far from clear, however, and the evidence in both cases is unrelated to the Russian collusion claims that set these prosecutions in motion.

A Virginia jury convicted Mr. Manafort on eight counts of fraud in his personal financial dealings, while failing to reach a unanimous verdict on 10 others. As these columns warned Mr. Trump in 2016, Mr. Manafort is a longtime Beltway fixer whose business was profiting from his political connections. He is the personification of “the swamp.”

One irony is that Mr. Trump hired him as campaign chairman in part because most Republicans with political experience shunned the New York insurgent. Mr. Trump knew Mr. Manafort from his apartment in Trump Tower, and he came recommended for his experience as a convention delegate counter for Gerald Ford in the 1976 scrum with Ronald Reagan. Mr. Trump fired him as campaign chairman weeks after the July GOP convention, but in 2017 special counsel Robert Mueller targeted Mr. Manafort for his ties to Ukrainian politicians who are close to Russia.

Mr. Mueller threw 18 charges at Mr. Manafort, no doubt figuring that some would stick, and that a conviction might cause Mr. Manafort to cooperate against Mr. Trump. Mr. Manafort now faces up to 80 years in prison, so he certainly has incentive to cooperate. But the question is how much Mr. Manafort even knows about any Russian connections. Nothing that has emerged publicly in two years of FBI and Congressional probes has demonstrated Trump-Russia collusion in 2016.

Mr. Cohen’s guilty plea may pose a greater risk to Mr. Trump given the lawyer’s role in paying $130,000 to pornography actress Stephanie Clifford so she would keep silent about an alleged affair with Mr. Trump in 2006. Mr. Cohen first denied making the payments, and Mr. Trump publicly denied knowing about them, but Mr. Cohen now says they both knew.

Mr. Mueller targeted Mr. Cohen and then passed the case off to the U.S. Attorney for the Southern District of New York, who dug into the lawyer’s personal business dealings. Mr. Cohen has always seemed to be a New York version of Mr. Manafort, and in the guilty plea he admits to cutting legal corners in his business dealings and lying about his taxes.

Mr. Cohen’s plea deal doesn’t stipulate that he must cooperate with Mr. Mueller, though he could certainly do that if he wants to impress the judge at his sentencing. But as with Mr. Manafort, it isn’t clear what he knows about Mr. Trump and Russia or Mr. Trump’s pre-presidential business matters.