Editor’s note: This is the editorial from the July/August 2018 print edition of The American Conservative.

We must confess that we never read Donald Trump’s famous book, The Art of the Deal. And we don’t know if there is a chapter called “Bait and Switch.” But that’s precisely what Trump perpetrated upon the American people when he crafted a campaign decrying America’s destructive and costly military Middle East involvement—and then, as president, set in motion events seemingly calculated to get us into another war there. 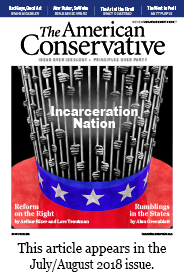 The president also promised to pull the United States out of the Iranian nuclear deal. However foolish, it was at least an honest representation of what his intention. And ultimately he did it. Thus it was possible to conclude that Trump was sincere on both his resolve to avoid further Mideast wars and his intention to exit the Iranian deal. Voters could draw their own conclusions about whether the two campaign promises were mutually exclusive or not.

But voters had no reason to conclude during the campaign that he would deal with Iran so aggressively as to force a dangerous showdown. Two significant developments suggest Trump’s intentions far surpass his campaign rhetoric. One is the recent ultimatum delivered to Iran by Secretary of State Mike Pompeo. He listed 12 demands on what Iran must do to avoid “unprecedented” economic pressure designed to crush Iran’s ability to play a major role in its home region. The other is a remarkable New Yorker story by Adam Entous detailing how the Trump administration has joined hands with Iran’s regional enemies—Israel, Saudi Arabia, and the United Arab Emirates—to strip Iran of its regional influence.

As Pompeo put it, “Iran will never again have carte blanche to dominate the Middle East.” Of course Iran has not dominated the region in any serious way for centuries, but it does have significant influence there by dint of its size, population, economy, and military. And its geopolitical influence expanded exponentially when America destroyed Iraq’s Sunni regime and removed a major impediment to Iran’s freedom of action.

So now Israel and those Gulf states want to put Iran back in its box, and they want America to supply the muscle. Pompeo demonstrated Trump is prepared to do so with demands that no sovereign nation could accept. As our Dan Larison wrote, they would require Iran “to surrender its foreign policy decision-making to Washington and U.S. clients and to abandon all of the governments and groups that have relied on its support.”

Indeed, they are reminiscent of Austria’s 1914 demands of Serbia after the assassination of Arch-Duke Ferdinand and the aggressive ultimatum delivered to Japan by U.S. Secretary of State Cordell Hull on November 26, 1941. Both were were designed to induce war.

The New Yorker piece leaves no doubt that Trump and his team welcome the new alliance aborning among Israel, the Saudis, and the UAE, pulled together by their fear and animosity directed at Iran. The headline: “How the President, Israel, and the Gulf states plan to fight Iran—and leave the Palestinians and the Obama years behind.”  One Trump friend said Netanyahu, mastermind of the anti-Iranian alliance, encountered at the White House a “blank canvas” for his bold brush strokes. This person added: “Israel just had their way with us.”

So America under Trump has become a cat’s paw in a Middle East intrigue that is very likely to lead to war. This is not how he campaigned in 2016, and it is not what the American people want. If Trump doesn’t veer away from this path to war and the result is further Mideast blood and woe, he likely will go down in flames. That would be fitting and proper. But the rest of the world wouldn’t deserve the result.