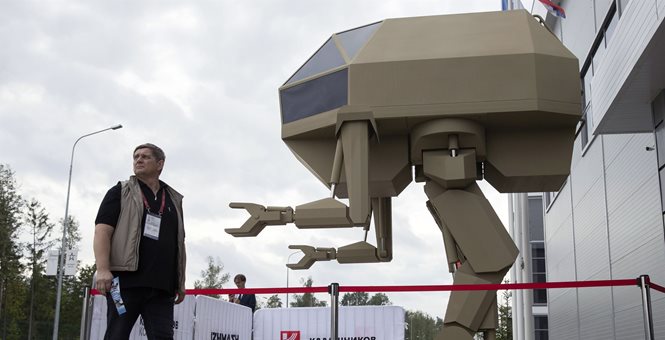 I may have to take back some of the things I’ve said about Boston Dynamics and how their freaky, massively powerful robot dogs will destroy us all when the AI becomes self-aware. When SKYNET finally goes online they’ll have an even more powerful option to work with. Thanks to the folks at Kalashnikov, gigantic, golden robots with guns in their arms will most likely be roaming the landscape and turning your meager dwellings into swiss cheese. (Daily Mail)

Russia’s most famous weapons manufacturer has unveiled a 13ft tall walking robot operated by pilots who sit inside it.

Kalashnikov Concern presented the state-of-the-art robot along with utility vehicles and new assault rifles at the Army 2018 Fair at the Patriot Park just outside Moscow.

The gold robot, called Igorek, is still in development and its creators do not wish to reveal all of its features until they have finished.

So far, all that is known about the ‘controlled bipedal walker’ is that it weighs 4.5 tonnes and can hold and move objects with its claws.

Let’s go to the video tour of your new robotic overlords.

Sure, there are a few hitches in this story which indicate that we don’t have to panic just yet. For one thing, the robot has yet to actually move. But given all the advancements in robot technology this century that’s just a formality. It also hasn’t fired its weapons yet but that’s child’s play. (Heck, a kid already managed to launch a drone with a handgun.) And this robot has a cockpit so it’s supposed to be operated by people.

But you’ve been to the movies, right? Once a thing has been imagined it’s only a matter of time before it becomes a reality. And if this robot can operate with a human controlling it, some modifications and better onboard computers will allow it to run on its own. Besides, it will probably have its own pack of robotic dogs clearing the path ahead of it and carrying extra ammunition.

The future is going to be awesome, kids. At least until it’s not. Far smarter people than me have speculated that there’s a better than even chance that self-aware AI already exists and we just don’t know about it yet. It must be getting a real kick out of this video.