I can think of nothing more American than peaceful protest during the national anthem, says … Ted Cruz’s opponent

Nothing more American? Not just “I support their right to do it and share their concerns about police brutality”?

This guy really is all-in on the theory that Texas just isn’t Texas anymore. Or at least, that it isn’t this year.

What if he’s right?

O’Rourke, a congressman from El Paso who has ignited Democratic hopes with his impressive fundraising, has 45 percent support among registered voters compared with Cruz’s 49 percent. Six percent of voters remain undecided.

While both candidates have largely consolidated their bases — with O’Rourke capturing the support of 90 percent of Democrats and Cruz securing 91 percent of Republicans — independents in the state are equally split: Forty-six percent of them back O’Rourke, while 45 percent support Cruz…

Among Latinos, who make up 20 percent of the registered voters sampled in the poll, O’Rourke gets 53 percent support compared with Cruz’s 42 percent.

A four-point lead, and it would be worse if Cruz weren’t holding his own with Latino voters. The last poll of the state taken before this, from Quinnipiac, had Cruz ahead by six. Still nothing to panic about, especially with multiple debates looming which Cruz will use to show off O’Rourke’s true-blue leftism. But if O’Rourke hasn’t faded a bit after those debates, then it might be panic time. You have to believe that a tight race in a Democratic climate in the final week or two will give O’Rourke a real chance at an upset, driving irregular Democratic voters to the polls by giving them hope and convincing undecideds to roll the dice on the new guy.

His spiel here is well done, which makes me wonder if he anticipated a question about it and had the answer planned. If so, it worked on the target audience: Anti-Trump liberals and, well, this guy. 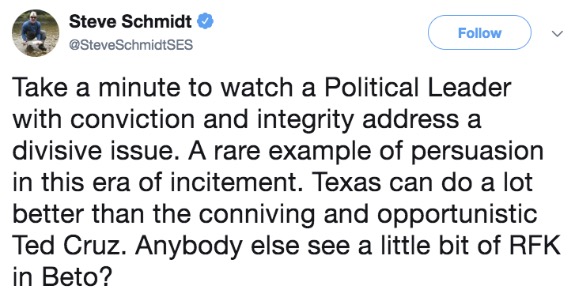 From putting Sarah Palin on the ticket to swooning over liberals who remind you of RFK. It’s been a long trip, Steve.

O’Rourke’s careful to say at the beginning that anthem protests are a hard issue on which good people can disagree, a view held by — what? Maybe five percent of the population?