Millie Weaver of Infowars confronted CNN’s resident activist Jim Acosta on Wednesday evening and did so in the most perfect way possible.

Acosta was confronted on his network’s leading role in eliminating Infowars from internet platforms. 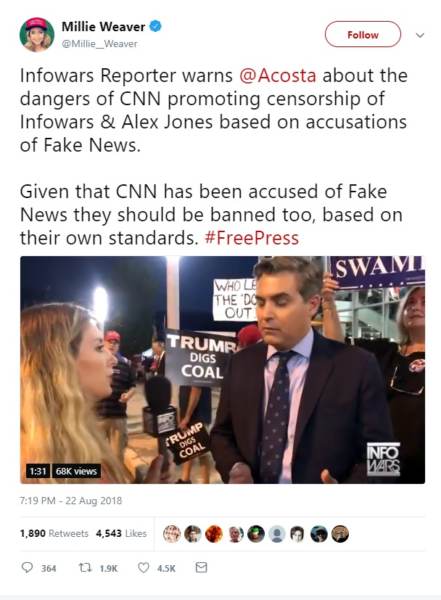 Infowars Reporter warns @Acosta about the dangers of CNN promoting censorship of Infowars & Alex Jones based on accusations of Fake News.

Given that CNN has been accused of Fake News they should be banned too, based on their own standards. #FreePress pic.twitter.com/OR4zfP0Y8L

Weaver, an absolute star, remained composed and eloquent as she questioned the activist about his network’s attempts to censor their competition.

”CNN was calling for Infowars to be banned,” Weaver countered. “Don’t you think that is kind of hypocritical though?”

Acosta responded by saying that he believes must be “truth based.”

Weaver asked the activist pundit if he thinks he should be calling for other news organizations to be banned, which Acosta responded to by saying that “we deal with the truth, we deal with the facts, and I would recommend you guys do the same thing.”

As the discourse heated up, Weaver dropped the nuke.

“Don’t you think it’s just better to counter people instead of ban them and censor them?” Weaver asked.

Instead of answering her question, Acosta grew agitated and asserted that people who deal in facts have nothing to worry about. Unfortunately for him, this means he himself is eventually going to be on the chopping block.

“You’re okay with media outlets being censored online? As a fellow journalist this doesn’t scare you?” Weaver persisted. “What is the pendulum swings the other way, Jim?”

Weaver continued to attempt to make her extremely valid point as Acosta rushed inside.

It’s unclear if guilt or shame made him move so quickly, but Weaver reminded him that CNN is often called fake news and that it is never good to ban or censor anyone because they could be next.