Silver lining for young and old athletes at Asian Games 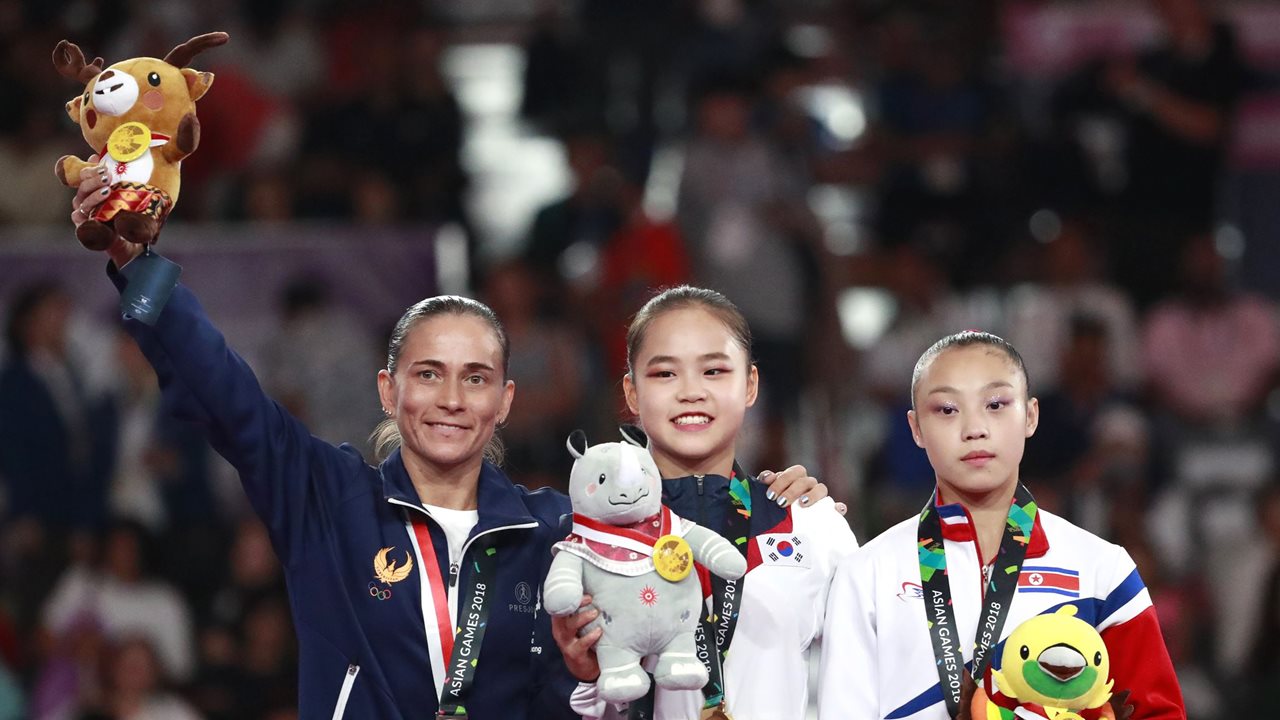 JAKARTA, Indonesia (AP) — There was a silver lining for seven-time Olympian Oksana Chusovitina at the Asian Games.

The 43-year-old Uzbekistan gymnast took silver in the vault, one-tenth of a point behind 16-year-old South Korean Yeo Seo-jeong.

Yeo, who was born 10 years after Chusovitina made her Olympic debut and won gold in the team event in ’92 in Barcelona, won with 14.387 points.

Chusovitina, who won the vault at the 2002 Asian Games and took silver medals in the event at the 1994 and 2014 editions, is competing with the intention of qualifying for the Tokyo Olympics in 2020 — at 45.

At the other end of the spectrum, 15-year-old Shardul Vihan became India’s youngest medalist in shooting at the Asian Games when he took silver in the double trap final behind Shin Hyun-woo of South Korea.

Japanese teenager Rikako Ikee has been a star in the pool, and picked up her fifth gold medal and seventh overall of the meet to give her country a slight lead over China for swimming superiority.

With six finals remaining in swimming, Japan leads the medals table with 17 golds, followed by China on 16.

The 18-year-old Ikee swam the butterfly leg of Japan’s winning 4×100-meter medley relay, and is tied for second for the most gold medals and overall medals won by a competitor at a single Asian Games.

“I feel a bit broken and my body aches,” Ikee said. “I’m proud to be an Asian champion, but I want to achieve more.”

Only North Korea shooter So Gin Man, who won seven golds and eight medals overall in 1982, has done better. Ikee still has one race to go in Jakarta.

So does Chinese backstroker Xu Jiayu, who won his fourth gold with victory in the 200.

In other finals on the penultimate night in the pool, Shinri Shioura beat his Japanese teammate Katsumi Nakamura to win 100 freestyle in 48.71, Satomi Suzuki won two golds in less than 90 minutes and Singapore’s Joseph Schooling picked up his second gold within 24 hours when he added the 50 butterfly title to his victory in the 100 fly.

Hwang Ui-jo and Lee Seung-woo scored for defending champion South Korea, which will meet Asian under-23 champion Uzbekistan in the quarterfinals.

China continued to dominate the podium across co-host cities Jakarta and Palembang and its medal tally hit 116 — including 55 gold — after 153 finals.

That included golds in six of the day’s first eight rowing finals.

The sequence of gold for China was broken by Uzbek pair Shakhboz Kholmurzaev and Shakhboz Abdujabborov, who took gold in double sculls, and the Vietnam crew of Ta Thanh Huyen, Luong Thi Thao, Ho Thi Ly and Pham Thi Thao in the lightweight women’s quadruple sculls.

Four of the six wushu gold medals in the sanda discipline went to China as well, with Iran collecting the other two via Erfan Ahangarian in the 60-kilogram division and Mohsen Mohammadseifi winning the 70-kilogram class.

In the 145.5-kilometer (90-mile) road race, Kazakhstan rider Alexey Lutsenko left it late before surging to the finish in a desperate four-way sprint to edge Fumiyuko Beppu for gold in 3 hours, 25 minutes and 25 seconds.

Jacqueline Siu won Hong Kong’s first gold medal of the games — and her first in four Asian Games — with victory in the individual dressage.

In the upset of the day, India lost in the kabaddi semifinals to Iran. The upset means there’ll be a non-Indian gold medalist in kabaddi for the first time since the sport was introduced to the Asian Games program in 1990.

John Pye is at https://twitter.com/byJohnPye