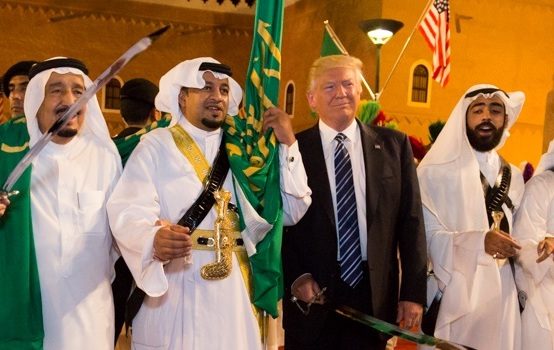 In his 2000 book The America We Deserve, Donald Trump explained his views about the morality of military intervention:

My rules of engagement are pretty simple. If we are going to intervene in a conflict it had better pose a direct threat to our interest- one definition of “direct” being a threat so obvious that most Americans will know where the hot spot is on the globe and will quickly understand why we are getting involved.

This non-interventionist sensibility is part of what made Trump stand out amongst his Republican competitors during the 2016 Republican primary. It sounds like a commonsense approach: you hit me, I hit you back; I don’t hit people first. This is surely one reason that some Trump voters chose him over the more hawkish Hillary Clinton. Those same supporters now have to be pleased that Trump is relying more on diplomacy with Russia and North Korea.

But what never seems to be discussed—on the campaign trail, in the media, on Trump’s Twitter feed—is the conflict in Yemen. And even then “conflict” isn’t really the right word. More like massacre. Or genocide.

On August 9, a Saudi airstrike hit a school bus and killed dozens, including many children. The Saudis have also bombed Yemeni schools, weddings, and hospitals. It’s been over three years since Saudi Arabia declared all of Yemen a military target, and in the interim over 10,000 Yemenis have been killed and almost three million more displaced. Saudi blockades have left three out of four Yemenis in need of humanitarian assistance, suffering from famine and a lack of basic health care. All of this amounts to a human rights catastrophe.

It’s a human rights catastrophe that—despite the fact that America has no quarrel with Yemen or the Yemeni people—President Trump is subsidizing. With its most recent deal to arm the Saudis costing the U.S. over a billion dollars, small government conservatives should be much more concerned about the price tag of this bloody foreign intervention. Despite a 37 percent increase in civilian deaths during the first half of 2018, the Trump administration has continued to provide the Saudi regime with arms, spare parts, maintenance, and fuel.

You’ll notice that major outlets like the New York Times covered Thursday’s tragic school bus bombing, but opted not to emphasize America’s support for the Saudi airstrikes. That’s even though the attack could have been carried out by a jet refueled by the American military (it’s been reported that the U.S. isn’t even tracking the jets it refuels).

While the Saudis are said to be responding to a takeover of Yemen’s capital, Sanaa, by the Houthis, whom they see as Iranian proxies, it’s hard to see what bombing, starving, and impoverishing Yemeni civilians has to do with pushing back Iran’s regional influence. And it’s even harder to see a moral justification for the U.S. to enable such reprehensible actions. The cost of Saudi support goes beyond mere dollars; it takes a heavy toll on our character.

It isn’t just Donald Trump (or his predecessor Barack Obama who began this support) whose character is sullied every day that the U.S. backs the Saudis. For three years now, the war that politically minded Americans have been most concerned with is the culture war—the hiring of Sarah Jeong at the New York Times and the banning of Alex Jones from Facebook are just the two most recent examples. This has engulfed America’s political culture in social media jabs, pile-ons, conspiracies, and accusations of treason.

The dynamics of both conflicts are strikingly similar—tribalism, collective irrationality, cycles of abuse, and blowback from each attack—but only one kind of war has physically broken an entire nation.

Trump ignores his role in the destruction of Yemen, yes. But why do we let him control the conversation? How can a country maintain a realistic moral foreign policy if no one wants to discuss what’s really happening? Whose fault is it that Jeong and Jones trend on Twitter more than Yemen (or any arms deal or bus bombing) ever has?

“The threat should be so direct that our leaders, including our president, should be able to make the case clearly and concisely,” Trump continued in The America We Deserve. Eighteen years later, now-President Trump has failed to make any case (let alone a clear and concise one) to the American people that there is any moral justification whatsoever for the Saudis’ war on Yemen. And as long as more Fridays go by with the same few people sharing the same statistics and same arguments about the same Yemen war, none of our representatives, let alone the president, will change their actions one bit. Trump’s foreign policy might be what America deserves, but it’s not the one we (or the Yemenis) need right now.

Cory Massimino is the senior academic programs chair at Students For Liberty, the mutual exchange coordinator at the Center for a Stateless Society, and a Young Voices contributor. Follow him on Twitter @corymassimino.