The Great Gildersleeve’s Fight for the Classics 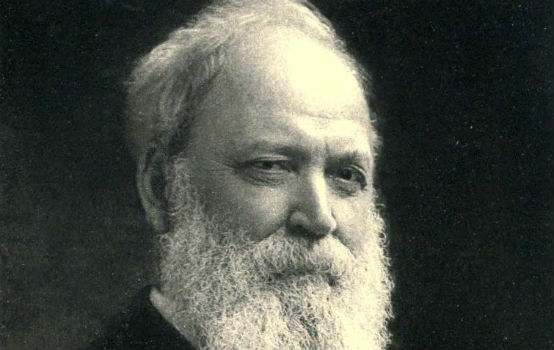 Though no longer a household name, Basil Lanneau Gildersleeve (1831-1924) was the most important American classical scholar of his generation. When a group of scholars dedicated a collection of essays to him on his 70th birthday, it was an event significant enough to be covered in the Baltimore Sun.

The son of a Presbyterian minister and a lifelong Presbyterian himself, Gildersleeve, having attended the College of Charleston and Jefferson College (now Washington & Jefferson), graduated from Princeton at 18. He went on to receive his doctorate at 22 from the University of Göttingen in Germany and was responsible for bringing the more advanced methods of German philology to North America, thereby making American classics something much more sophisticated than mere parlor-room belles-lettres. In addition to teaching at the University of Virginia and Johns Hopkins University, he served (twice) as the president of the American Philological Association and was the long-time editor of the American Journal of Philology, which he founded.

Here are some representative titles of his work in classics: “Problems in Greek Syntax”; “Temporal Sentences of Limit in Greek”; “Contributions to the History of the Articular Infinitive”; “On εἰ with the Future Indicative and ἐάν with the Subjunctive in the Tragic Poets”; “The Consecutive Sentence in Greek.” At this point the reader may be tempted to shake his head and stop reading. But he should pause for a moment first.

For, in addition to these highly technical works—important as they are (and they are important)—Gildersleeve also dilated on matters of more catholic interest. These are mostly found in Essays and Studies, Educational and Literary and a collection of three lectures called Hellas and Hesperia. One such essay will serve presently as our theme.

That essay is “Limits of Culture,” a lengthy discussion of education first published in Southern Review in 1867 and later included as the first piece in Essays and Studies. As Qoheleth says in Ecclesiastes, there is nothing new under the sun: almost a century before C.P. Snow’s influential The Two Cultures and the Scientific Revolution, Gildersleeve had already taken up the question of the place of humanistic studies in relation to the hard sciences. We may think that current arguments about the role of the study of language, literature, and history in relation to STEM fields are of relatively recent vintage, but they are not. They became current almost as soon as the explanatory power of the new science was evident, and Gildersleeve had broached the question even before the famous late 19th-century dispute between Matthew Arnold and Thomas Huxley over science, culture, and education. Gildersleeve and Snow are alike in having seen the necessity for each type of intellectual endeavor, but where Snow took up the cudgels on behalf of the hard sciences, Gildersleeve took them up on behalf of classical philology, the study of ancient languages. It was a pursuit he considered no less scientific, that is, capable of yielding real knowledge and subject to exacting disciplinary standards, than chemistry or botany. At the same time, he was much more positive about the genuine goods of scientific advance than Arnold. He therefore provides a good model of something usually conspicuous by its absence in public debate—which is to say, Gildersleeve’s approach has the marks of sanity and real thought.

The background against which Gildersleeve was writing was the perennially worrisome zealotry of educational reformers, who often make up with enthusiasm what they lack in understanding. In particular, Gildersleeve wished to lodge a protest against the elimination of the mandatory study of Greek and Latin in American higher education. By the by, imagine a time at which that seemed outrageous: today’s technocratic heirs to these reformers would be happy to do away with them altogether, at every level. As Gildersleeve says (emphasis added):

Year by year the classics have been pushed back in the regular curriculum of Northern Colleges. In many of them, we believe, Latin and Greek are elective studies during the last two years of the course; and fierce champions of ‘scientific’ pursuits are hedging in the poor Greeks and Romans until they will be forced into quiet niches from which they can do no harm. Meanwhile the character of the controversy is degrading. The delicate thing to be educated, the wonderful human mind, is pulled about and snarled over by these “educationists” as if they were dogs and that a bone.

One is sad to say that Gildersleeve was a prophet. And because prophets are despitefully used in their hometowns, it goes without saying that for that reason few of our own reformers would pay any attention to what he has to teach.

We should, moreover, bear in mind that these reforms were proposed in an era in which “Great Books” education did not exist as such. If one wanted to read the “Great Books,” or even the pretty good books, of Greek and Roman writers, or those of the Middle Ages or much of early modernity, it was still (happily) expected that one would learn Greek and Latin to do so, despite Ralph Waldo Emerson’s comment about translations in his essay “Books”:

I rarely read any Latin, Greek, German, Italian, sometimes not a French book, in the original, which I can procure in a good version. I like to be beholden to the great metropolitan English speech, the sea which receives tributaries from every region under heaven. I should as soon think of swimming across Charles River when I wish to go to Boston, as of reading all my books in originals when I have them rendered for me in my mother tongue.

The sidelining of Greek and Latin, then, meant in Gildersleeve’s day the sidelining of the Greeks and Romans as well. Gildersleeve rightly would have had little interest in trying to preserve the latter without the former, in attempting an education that relied solely on translations and did not insist on the rigorous inculcation of the original languages. And not for frivolous reasons: as he notes, there is just too much of importance that gets lost in translation. “Words in different languages seldom cover one another,” he writes, “perfect equivalents are rare, and not only so, but every classic author is studded with technical terms, as it were, which must be read by the light of that author’s peculiar language and which defy a strict transfer to another tongue.” Because that is so, “the ancient languages are the means of access to the ancient mind” and therefore are “of priceless value to humanity,” as he quotes John Tyndall as saying. Because “the history of the world is one” and there is an “inseparable union of antiquity with modern life,” we cannot understand ourselves without understanding the Greeks and Romans. For that reason, “classical philology [is] a study of indispensable importance.”

Gildersleeve’s position does not come from a naive idealism about the past; “[w]e do not say unreservedly ‘the old is better.’” He could be vicious about certain aspects of antiquity. For instance, of some minor authors of the first century AD, he opines:

Away with Marcus Manilius, Valerius Flaccus, Silius Italicus and tous ces garçons-là, as Scaliger called them with deserved contempt; and we earnestly hope that professors of Latin do not generally deem themselves bound to read, as Addison considered himself bound to quote, these vapid productions.

Indeed, there are bits of “Marcus Tullius Chickpea” that, he says, might be better left aside. But none of this negates the real value that antiquity and its languages have for proper education as one part of a whole. “We shall not,” he cautions, “imitate the bigotry of those who cry down the study of the classics, and we shall admit as freely as any one the claims of the sciences which are called by eminence the inductive.” But the point is that such sciences cannot form a complete education, just as the study of antiquity alone cannot do.

But we should perhaps back up a touch. For much comes down to the crucial question, “What is education?” To answer it, Gildersleeve insists on “distinguishing sharply between ‘education’ and ‘instruction.’” He continues:

Education is the normal development of the powers that lie in man’s nature, and is not to be confounded with instruction, which merely furnishes the means and appliances of education. It is your merely ‘instructed’ man that often amazes you by a want of comprehensive power, not your really ‘educated’ man; and when teachers of physical science complain that untaught minds grasp the propositions and sequences of inductive reasoning more readily and firmly than those which have been ‘educated’ in classical learning, they confound accumulation with appropriation.

Education, then, is not mere information delivery. And in fact a knowledge of Latin helps to correct our bastardized English idiom even here. Understood etymologically, to in-form (from Lat. informare) is to shape, mold, develop. As Gildersleeve remarks, “‘[I]nform’ and ‘information’ have been reduced in modern times to the mere acquisition of facts, instead of a plastic process of assimilation.” But that “plastic process” is what is really wanted: the comprehensive formation and maturation of man’s mental powers as an organic whole. Properly conceived, “instruction” is instrumental in “education” rather than tautologous with it.

Again, such development cannot be reached through the sciences alone—or through languages alone. No, the hard sciences, language, literature, history, philosophy—all are needed, and the absence of any leads to poverty in the whole. It would be ridiculous to cut off our educational nose to spite our societal face, but that is precisely what has often occurred in the recent history of education. It need not be so. Basil Gildersleeve is eloquent as to why it should not be so, and as to why the study of the Greeks and Romans is essential to it not being so. I have alluded to some of those reasons above and shall take up some more in a subsequent foray. For the present I will simply say with Gildersleeve that “the ‘fast’ youths of our country might take many a lesson from the Nicomachean Ethics of the ‘stout Stagirite”!

E.J. Hutchinson is associate professor of Classics and director of the Collegiate Scholars Program at Hillsdale College. His research focuses on the reception of classical literature in late antiquity and early modernity.