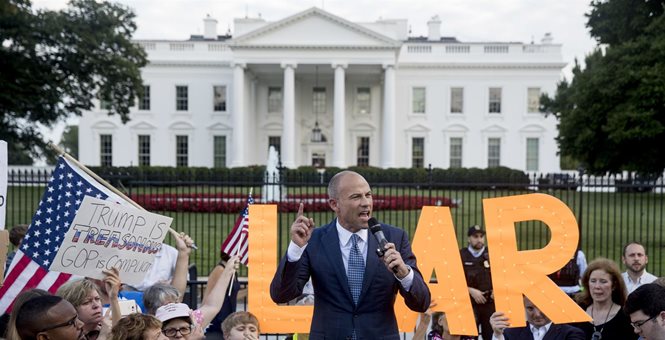 Here at Hot Air we’ve been covering Michael Avenatti’s presidential ambitions since July. That’s when Stormy Daniels’ attorney, after months of free airtime on CNN, announced he would consider a run in 2020:

IF (big) he seeks re-election, I will run, but only if I think that there is no other candidate in the race that has a REAL chance at beating him. We can't relive 2016. I love this country, our values and our people too much to sit by while they are destroyed. #FightClub #Basta

Since then, there have been several indications that he’s semi-serious about this including his plans to speak at Iowa’s Democratic Wing Ding, a traditional launching pad for Democratic candidates. Just last week, speculation spiked when Avenatti tweeted this summary of his policy positions:

Many have asked me my position on various issues. Below is a summary of where I stand. This is not an exhaustive list and more positions & details will follow. Most importantly, I didn't have to hire a pollster or political consultant to tell me what to say or what to believe. pic.twitter.com/hbXj1Vv3O9

Today, there’s another development in the story which suggests Avenatti really is taking 2020 somewhat seriously. Buzzfeed reports he is launching a PAC:

Michael Avenatti, the self-described potential 2020 contender and lawyer representing Stormy Daniels in her lawsuit against Donald Trump, is launching his own federal PAC to support Democratic candidates with “the size and the presence to really fight back and advocate from a position of strength as opposed to weakness.”…

Fight PAC, which he noted will not take contributions from corporations, will also serve as a vessel for his continued political travel. This summer, the Stormy Daniels lawyer has racked up a list of visits to key primary states: He’s made two trips to Iowa, headlined a county picnic in New Hampshire, and keynoted a party dinner in Ohio…

Well, Democrats could do worse than a guy who seems to spend more time on CNN than some of the hosts. I don’t think it’s likely this is going to catch on, but stranger things have happened. A more seasoned candidate could decide to take a risk on a media-savvy attack dog like Avenatti for the VP slot if he can show he’s able to generate some campaign trail enthusiasm. Let’s wait about six months and then we’ll see how serious this is.