Rep. Al Green: “Trump should be impeached for harming society” 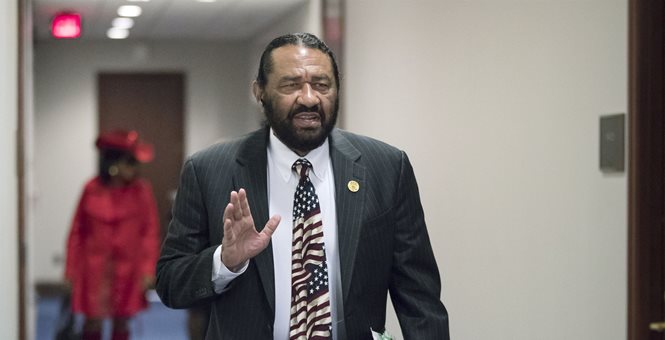 I’m sorry, America. Let me apologize to conservatives and other sane people across the country for the verbal lunacy flowing from the mouths of some Houston Democrats. Friday’s case in point: Rep. Al Green. I do not live in his district but I cringe along with the rest of the country when he opines about Republicans in general, President Trump specifically. It’s embarrassing.

Let me refresh your memory because you likely are not familiar with the name. He’s a long-time backbencher known most recently for bringing the drumbeat for the impeachment of President Trump. He filed articles of impeachment in October 2017 in the House and his plea continues to this day. The 70-year-old 7 term congressman says the president doesn’t have to commit a crime to be impeached and Trump needs to be impeached because he is “harming society.” Here is a clip from his interview with the far-left radio network, Democracy Now.

Rep. Al Green (D-TX) says that Trump "does not have to commit a crime to be impeached," adding that he should be impeached for "harming society." pic.twitter.com/b1x6okiS0D

It’s sad, really. The man is a lawyer. Here is the definition of presidential impeachment from a Google search: (emphasis theirs)

Definition: Impeachment. Impeachment is an action by the House of Representatives that accuses the president, vice president or other civil officers of the United States of committing, ‘Treason, Bribery, or other high Crimes and Misdemeanors.’

He’s going to need a crime to pull off this caper. Hurt feelings because he’s a sore loser isn’t going to cut it. Unlike his fellow leftists, he is quite open about his agenda. He doesn’t take the Nancy Pelosi route of hushing up talk of impeachment so as not to rile up Republican base voters and guarantee conservatives get out and vote in the mid-terms.

Whether we like it, want it, or oppose it, the November election will be about impeachment. #CountdownToImpeachment #ImpeachmentIsNotDead

Green likes it and he wants it. He’s consistent with his views from the fever dreams of the far left in Congress this session. He wants to abolish ICE. He calls ICE “a symbol of national shame” but stops short of the dream of open borders. He’s not quite bold enough to admit to that. He hopes the will of others in the House is as strong as his.

"Where there is a will, there is a way." The framers of the Constitution provided impeachment as the way to remove an unfit President. The ultimate question is, does Congress have the will? #CountdownToImpeachment #ImpeachmentIsNotDead

Democrats are desperate to punish President Trump for winning the election. They refuse to believe he did so without colluding with Russians, though we have yet to see any evidence of this conspiracy theory. What they fail to admit is that the 2016 elections were under the watch of President Obama. We now know that Team Obama didn’t even bother to alert the Trump campaign of Russian attempts to meddle in the election. We now know that Obama’s people worked diligently to help Hillary Clinton at every opportunity. Yet, Trump persisted. And he won.

This is your daily reminder that any day that Hillary Clinton isn’t president is a good day.