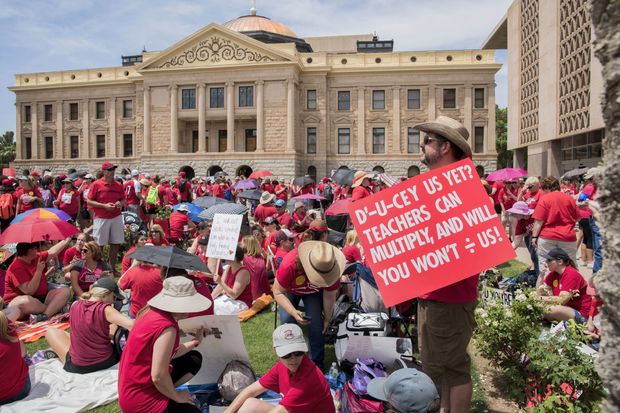 Thousands of Arizona teachers and supporters demonstrate for better school funding and salaries, for a third day at the Arizona State capitol in Phoenix, April 30.

The battle for Congress is drawing most media attention this year, but an underreported story is the campaign by public unions to turn multiple states sharply to the left. A bellwether is Arizona, where a pair of ballot initiatives would raise taxes toward New Jersey levels and reverse years of progress on education choice.

Unions have spearheaded two ballot initiatives to repeal an expansion of education-savings accounts and double the top marginal income-tax rate to 9%. The political gambit is to raise taxes on the affluent supposedly to finance education, but history shows that spending will quickly soak up new revenues and the unions will soon be back for more.

and the GOP Legislature tried to pacify teachers with a 20% raise over three years. The union thanked them by launching the referendum campaigns, and national unions are beginning to pour money in support.

Arizona’s 4.54% top income-tax rate, which starts at $155,159 for individuals, has lured thousands of retirees and businesses from higher-tax states. Between 2013 and 2016, the state gained a net $6 billion in income from other states. Over the past two years Arizona’s labor force has grown about 250% faster than California’s.

Unions are now threatening this growth with an initiative that would raise the rate on income over $250,000 to 8% and above $500,000 to 9%. The proceeds from the tax hike ostensibly would be dedicated to schools, but revenues are fungible. Tax dollars the state currently spends on education could be diverted to other purposes like, say, renewable energy subsidies.

California provides a cautionary example. The state Constitution requires a minimum percentage of the state budget be spent on K-12 schools, which gives lawmakers little flexibility during downturns to prioritize spending. Its steeply progressive tax code also causes boom-and-bust spending cycles. Politicians blow out spending when revenues surge and then raise taxes when they sink.

After income-tax revenues tumbled in California during the last recession, public unions championed a ballot initiative to raise the top rate to 13.3% from 10.3% to finance schools. But nearly all of the new revenues have been consumed by pensions. Now cities across the state are asking voters to raise local sales and property taxes to fund—you guessed it—pensions and schools. Unions have also submitted signatures for a referendum for the 2020 ballot to abolish the state’s property tax cap for businesses.

Democrats in New Jersey and Connecticut have repeatedly raised their state’s top income-tax rate, which has driven out high earners. But the increased revenues still aren’t sufficient to pay for the promises they made to insatiable public unions.

Arizona teachers unions are also pushing a referendum to kill an innovative private-school choice program. In 2011 the state established education savings accounts (ESAs) for special-needs students and those trapped in failing schools, which were extended last year to all kids.

Under the program, the state deposits 90% of a student’s per-pupil allowance into an account that parents can tap to pay for private-school tuition, home-school curriculum and other educational expenses. The program is capped at 30,000 in 2022, which is less than 3% of public school enrollment.

Teachers unions fear ESAs will become so popular with families that Republicans will lift the enrollment cap, so they’re trying to kill the program now. But if they succeed in rolling back the ESA expansion, charter schools and the state’s expansive scholarship tax-credit programs could be targeted next.

Public unions are hoping to make Arizona a political demonstration project and are counting on opposition to President Trump to boost Democratic turnout. If their referendums pass, initiatives like it will spread across the country—first in newly Democratic statehouses and then in 2020 on state ballots. Nevada can expect a referendum to establish an income tax. Florida’s private-school choice programs may also come under attack.

Republicans and business groups in Arizona have been nonchalant about the referendum threats. This was the mistake of Republicans in Missouri where unions spent heavily to repeal the state’s right-to-work law this month. Governor Ducey has been focusing on his re-election, but he needs to make a strong case to voters that attempting to soak “the rich” who make $250,000 a year will end up soaking all Arizonans. Who wants to live in a hotter version of New Jersey without the beach?