A Salute to John McCain 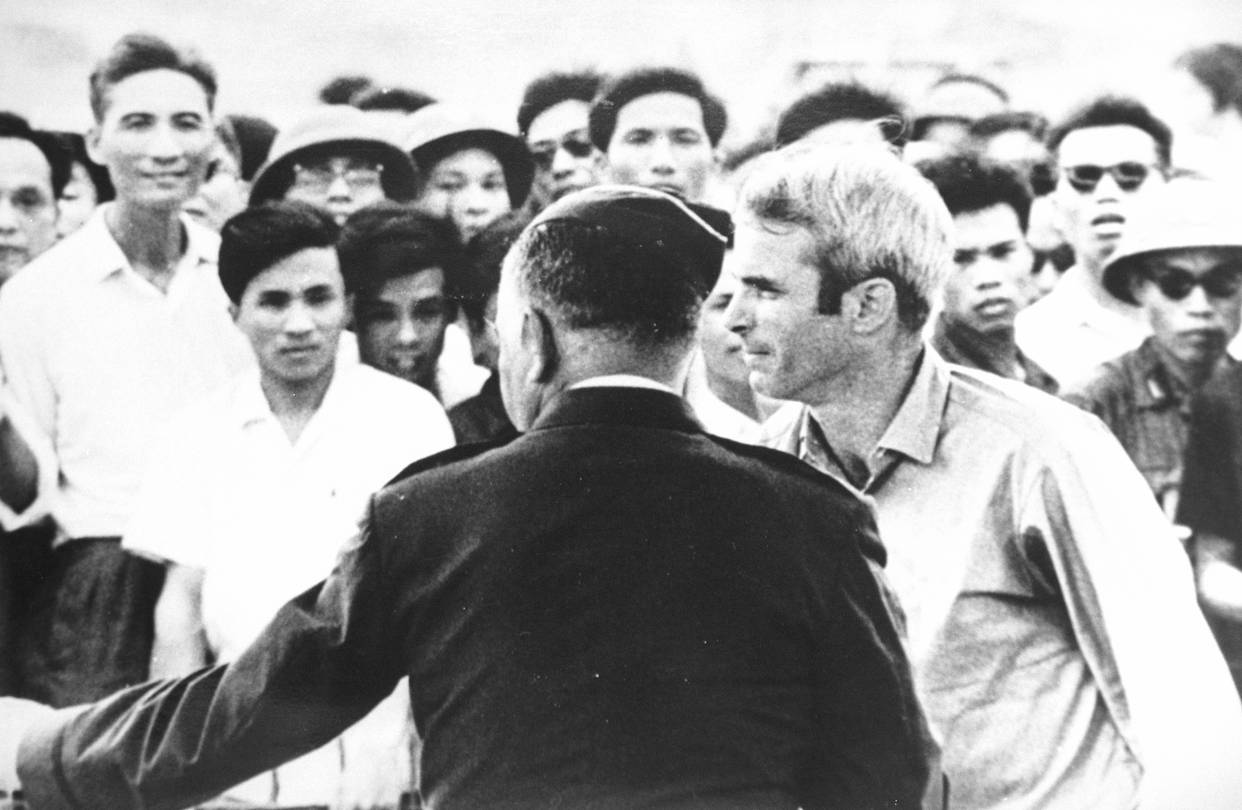 was shot down over Hanoi in October 1967, he was near death: his leg, both arms and left shoulder were broken. Some of his fellow POWs didn’t think he’d make it. But the Naval Academy grad beat the odds then and continued to do so until Saturday, when he finally succumbed to brain cancer at age 81.

McCain’s calling card was honor and character. When he was fished out of that lake in downtown Hanoi, the North Vietnamese first withheld treatment until they discovered his father was an admiral and commander of naval forces in Europe. The late, great Admiral James Stockdale, who was tortured in that prison, says McCain “received an offer that, as far as I know, was made to no other American prisoner: immediate release, no strings attached.”

The young pilot told the Vietnamese what they could do with their special treatment, effectively sentencing himself to four more years of beatings. This reflected his profound sense of duty. In the Hanoi Hilton he and his fellow POWs resisted the enemy despite torture and returned with honor.

McCain stayed in the Navy after returning home until he retired in 1981 to pursue a political career. In 1982 he was elected to Congress from his new home in Arizona, and four years later he won a Senate seat he would hold until his death.

In the Senate his politics was generally conservative but more personal than ideological. His abiding priority was the men and women in uniform. McCain was determined that when America sent its soldiers, sailors, airmen and Marines into harm’s way, they would have what they needed to prevail—including the moral support of their representatives. And he wasn’t afraid of sacred cows: McCain spoke loudly and honestly about ethanol subsidies, knowing it would cost him in the Iowa primaries if he ever ran for President.

McCain’s preoccupation with personal honor did not always serve him well. He was tarred by the Keating Five scandal in 1989 when he and four other Senators were accused of improperly intervening with regulators on behalf of the Lincoln Savings & Loan run by Charles Keating, who had been a campaign contributor. McCain was the least culpable, having been dragged in by the others. But he was scarred by the event and devoted the rest of his career to rehabilitating his name by promoting campaign-finance reforms that in theory take money out of politics but in practice dent the First Amendment.

Over time he adopted the media’s label as a “maverick,” nicknaming his 2000 presidential campaign bus the “Straight Talk Express.” But while he often referred to the media as “his base,” with only partial irony, his positions put him at odds with many of his own party and it cost him the nomination against

He tried again and won in 2008, but that was the worst possible moment for a Republican: amid a financial crisis, a long and unpopular war in the Middle East, and an attractive African-American on the Democratic ticket. The same media that praised his anti-GOP positions abandoned him against

citing his choice of

as a running mate as an excuse.

In his last decade McCain continued to advocate for a stronger military and continuing U.S. leadership against the advancing authoritarians in Russia, China and the Middle East. But his vote against reforming ObamaCare and Medicaid contradicted his support for the military. Without reforms, entitlements will grow and inevitably squeeze military spending to European levels.

Most important to McCain’s view of politics was his devout patriotism and unaltering faith in American exceptionalism. Hailing to the service of his grandfather and father, and his own in Vietnam, McCain believed in the rightness of American purposes around the world. This belief caused him in his final years to resist the drift in his own party toward isolationism. This was the principled root of his differences with Donald Trump.

When McCain received his brain-cancer diagnosis, his daughter called him a “warrior at dusk.” It is an apt description. While the searing experience of Vietnam led so many to lose their faith in America’s goodness, for John McCain it was the opposite. “I fell in love with my country,” he said, “when I was a prisoner in someone else’s.”