No, America Isn’t on the Brink of a Second Civil War 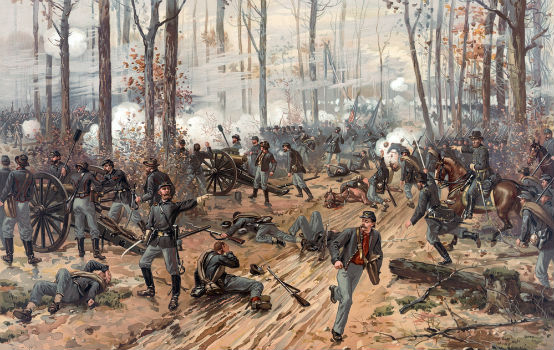 Imagine a political party commands the absolute loyalty of 40 percent of the American population. The leaders of this party use bare-knuckle tactics to pass bills that appall the majority of Americans. Despite public anger, its legislators cling to power by exploiting anti-majoritarian elements of the political process. Adding insult to injury, they justify their actions with a doctrine of minority rule.

The scenario described above actually happened, but not in the present or recent past. In fact, it’s taken from the 1850s.

There is a lot of unhappiness with the state of American politics today. Progressives decry “veto points” in the Constitution. President Trump rages against the “deep state.” Commentators fret about negative polarization as the organizing principle for elections. Yet the idea that this is going to lead to a second civil war, as some of the more feverish voices have alleged, should be dismissed out of hand. A dysfunctional government is not the same thing as a destructive government. Those who wish to see the difference should read Northern Men With Southern Loyalties: The Democratic Party and the Sectional Crisis by historian Michael Todd Landis. His fantastic book is a sobering story about what politicians will do to obtain and keep power, consequences be damned.

By 1850, Southern Democrats held power disproportionate to their numbers in Congress thanks to anti-majoritarian elements in American politics. Among them were the Constitution’s three-fifths clause, which inflated the representation and electoral vote totals of slave states; the equal number of slave states and free states, which turned the Senate into a legislative chokepoint; and the election of U.S. senators by state legislatures, making incumbents hard to dislodge. Southerners used these “veto points” to kill anti-slavery bills. In the late 1840s, legislation that barred bondage from lands captured in the Mexican War, the so-called Wilmot Proviso, repeatedly passed the House of Representatives only to die in the Senate. After 1850, Democrats used these checks on majority rule to override public opinion and pass pro-slavery legislation.

Landis justly accuses many Northern Democrats of being “knowing collaborators in the Slave Power agenda of slavery expansion and Southern supremacy.” Faced with the choice between career advancement in a political party with disproportionately Southern leadership and obeying their constituents, many Northern Democrats chose the former. Their votes secured the passage of the Fugitive Slave Act of 1850, the Kansas-Nebraska Act of 1854, and a pro-slavery state constitution for Kansas in 1858.

Leading Northern Democrats were accomplished politicians. Jesse Bright had such a tight grip on his Senate seat that contemporaries called him the “autocrat” of Indiana. Senator Lewis Cass of Michigan managed to win reelection despite defying the instructions of his state legislature to vote for the Wilmot Proviso. James Buchanan of Pennsylvania held major foreign policy posts prior to becoming president in 1856. Alongside such (in)famous men were obscure congressmen who played outsized roles in the political dramas of the age. For example, William Richardson of Illinois worked with Alexander Stephens, the future vice president of the Confederacy, to push the Kansas-Nebraska Act through the House of Representatives in the spring of 1854.

Northern voters did express their displeasure with their representatives. In the 1854 elections, the Democratic Party lost 21 of 22 Northern districts where Democrats voted to allow slavery into Kansas. But in the face of rising anti-slavery sentiment in the North, Southern Democrats and Northern “doughfaces” did not reevaluate their strategy. They demanded greater fidelity to party orthodoxies on slavery, and denounced dissenters as fanatics and traitors. Two years after the Kansas-Nebraska debacle, James Buchanan, who so often talked up his “long, consistent strong support of Southern rights,” won the presidency.

Southern rights meant protecting slavery at all costs. In 1857, a proposed state constitution for the territory of Kansas arrived in Congress. The document was the handiwork of a constitutional convention called by an illegitimate territorial legislature (it had been elected by pro-slavery settlers, who constituted 10 percent of the population, and Missouri “border ruffians,” who stuffed ballot boxes). Yet Southern Democrats turned the admission of Kansas as a slave state into a test of party loyalty. Buchanan overcame fierce resistance with threats of purges and promises of bribes. Thomas Harris of Illinois remarked that Buchanan had “bought men like hogs in the market.” White House agent Cornelius Wendell was blunter: “The object was accomplished, and the money was paid.”

While Buchanan was doling out bribes, some pro-administration Democrats attempted to explain themselves. Senator William Bigler of Pennsylvania opted for expediency: the need to end the violence in Kansas, he said, meant Congress had no choice except to approve a fraudulent state constitution. Jesse Bright was more direct. Speaking on the floor of the Senate in March 1858, he articulated an anti-democratic philosophy of minority rule:

The representative opinion may be in conflict with the popular voice; an overwhelming majority may raise an indignant protest against the expressed legislative will; yet it stands as the controlling law until set aside in accordance with legal forms. He who supposes that the opinions of a majority, even when clearly expressed, necessarily make the laws, has mistaken the whole theory of our Government. That majority, before it can make itself effectual, must fix upon its representative and clothe him with the authority to speak in its behalf at the proper time and place.

He was no less blunt in condemning the fitness of voters: “So strong…is my conviction of the viciousness of the principle of submitting to a direct vote of the people the propriety of the enactment or rejection of laws, that for one I am prepared to extend the same objection to the submission of entire constitution to the same tribunal.”

For the record, the Senate expelled Bright in 1862. The charge was treason.

The United States is nowhere near fighting a second civil war for the simple reason that neither political party has shown a willingness, let alone an ability, to repeatedly defy public opinion on divisive issues. The antebellum Democratic Party muscled through laws protecting slavery through Congress, and many Northern Democrats openly disregarded their constituents’ wishes in the process. For all of President Trump’s braggadocio, the Republican Party’s achievements amount merely to tax reform and appointments to the federal judiciary. Anyone howling about about minority rule and a second civil war needs to ponder that gap.

Tim Reuter is a writer based in New Haven, Connecticut.