Roger Stone: Robert Mueller and Ronan Farrow are both coming for me (Update) 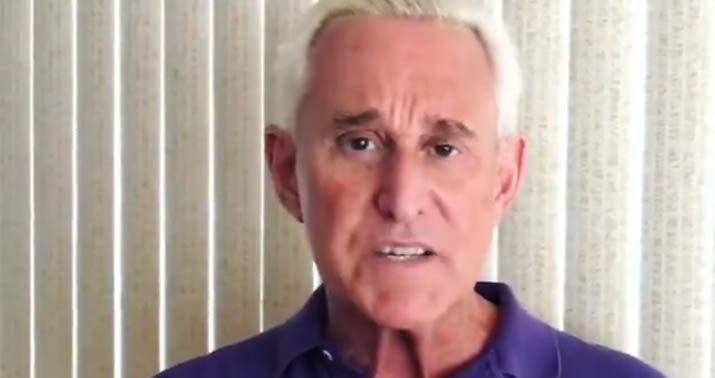 Roger Stone appears to be having a bad day. Yesterday he sent out an email asking for donations to his legal defense fund and predicting that he would be the next person indicted by Special Counsel Robert Mueller. “I am being targeted not because I committed a crime, but because the ‘deep state’ liberals want to silence me and pressure me to testify against my good friend President Donald J. Trump.

Roger Stone's latest pitch to his email list of supporters boils down to this: Donate right now because, literally, I am the next guy to get indicted. pic.twitter.com/sWAx2BQtSJ

If you go to the Roger Stone legal defense fund website, you’ll get a slightly different version of this same pitch:

Roger Stone refuses to be pressured into testifying against President Trump. His legal fees in this epic fight could top $2 million, threatening to destroy him and his family…

It is becoming clear that Special Counsel Robert Mueller intends to frame Roger Stone for some bogus “offense” unrelated to Russian collusion, Wikileaks, or perhaps even the 2016 election.

But Mueller isn’t the only person coming for Stone, apparently. Today, Stone published this brief video saying that someone has been shopping a “fake news” story about him to various outlents, most recently to Ronan Farrow:

Roger Stone says that someone has told Ronan Farrow/The New Yorker that he told Trump about the Wikileaks email dump head of time and exactly what would be in it. He denies the allegations. pic.twitter.com/Yaqfh5thIb

“Someone is saying that they overheard a conversation in which I told Donald Trump in October of 2016 what exactly would be in the WikiLeaks disclosures and when they would be disclosed,” Stone says. “This is categorically false,” he adds. So far, Farrow has tweeted anything confirming or denying Stone’s claim.

In 2016, Stone said on Infowars that he believed Wikileaks would start releasing documents that would harm Hillary’s campaign on a specific date, but he later denied any advanced knowledge. From the Hill:

In an Oct. 2, 2016, interview on Infowars, Stone said that an intermediary met with WikiLeaks founder Julian Assange, and that he had been assured that the anti-secrecy website would release the hacked documents on Oct. 5, 2016.

“Now, an intermediary met with [Assange] in London recently, who is a friend of mine and a friend of his, a believer in freedom,” Stone said at the time…

Stone denied in a Friday interview on CNN that he had any advance notice about the WikiLeaks disclosures, and said he had not communicated with Assange or anyone else connected to the website.

“I had no advanced notice of the content source or exact timing of the WikiLeaks disclosures including the allegedly hacked emails,” he said.

The date Stone had predicted for the release was wrong. According to the Hill, the actual release began two days later. Two months ago, the Washington Post reported that Stone had met with a Russian about dirt on Hillary Clinton in 2016:

One day in late May 2016, Roger Stone — the political dark sorcerer and longtime confidant of Donald Trump — slipped into his Jaguar and headed out to meet a man with a “Make America Great Again” hat and a viscous Russian accent.

The man, who called himself Henry Greenberg, offered damaging information about Hillary Clinton, Trump’s presumptive Democratic opponent in the upcoming presidential election, according to Stone, who spoke about the previously unreported incident in interviews with The Washington Post. Greenberg, who did not reveal the information he claimed to possess, wanted Trump to pay $2 million for the political dirt, Stone said.

“You don’t understand Donald Trump,” Stone recalled saying before rejecting the offer at a restaurant in the Russian-expat magnet of Sunny Isles, Fla. “He doesn’t pay for anything.”…

Stone has said it’s possible he will be indicted, speculating that Mueller might charge him with a crime unrelated to the election to silence him. He said he anticipates that his meeting with Greenberg could be used in an attempt to pressure him to testify against Trump — something he says he would never do.

I guess we’ll have to wait and see if there’s anything to this. For now, watch this Post video laying out what happened at the meeting and Stone’s suspicions about it:

A quick reminder that I don’t comment on reporting I haven’t published, and if you’re reading about my work from secondary sources you’re often not getting the full or correct story—especially in cases where parties have an interest in downplaying or otherwise spinning.