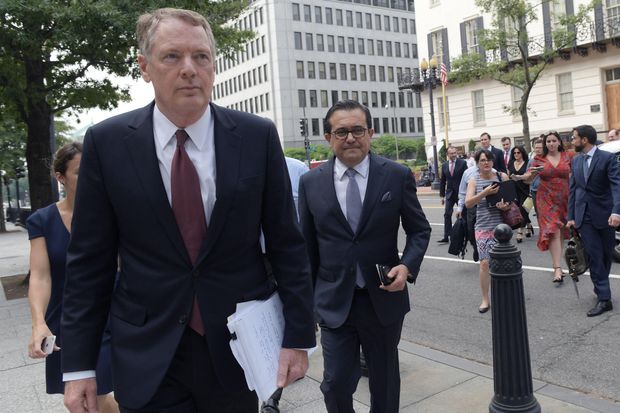 U.S. Trade Rep Robert Lighthizer and the Secretary of Economy of Mexico Ildefonso Guajardo go to the White House at the end of their meeting on the renegotiation of the Free Trade Agreement of America of the North, Washington, D.C., Aug. 27.

called “much better” than the North American Free Trade Agreement. We’ll reserve judgment until we see the fine print, but on first inspection this is half a Nafta that contains some improvements but is notably worse in many ways. Whether it can pass Congress is far from certain.

Financial markets staged a modest relief rally Monday on the talk of trade progress. At least for now, and at least for Mexico, Mr. Trump has set aside his threat to withdraw unilaterally from Nafta. We’re not sure he has the legal authority to withdraw, and it would be a huge economic blow to all of North America if he did—and to his own chances for re-election. But with Mr. Trump, self-damage isn’t always an effective restraint.

The good news in the new deal includes an extension on data protection for biologic drugs to 10 years from five. Genetically modified crops couldn’t be discriminated against, and there are protections for agriculture producers such as cheese farmers against regulatory abuse. These and other details are helpful modernizations for a pact that is nearly 25 years old.

The U.S. also seems to have stepped back from its demand for a five-year “sunset” that was essentially a backdoor way to dampen cross-border investment. The two parties agreed instead to a 16-year pact with a review period after six years. They could then extend the pact for another 16 years if everyone is happy, or they could renegotiate areas that have become problems. This introduces more political uncertainty for investors than under the current pact but may be tolerable.

The new deal has many problems, however, not least that it excludes Canada. U.S. Trade

used the desire of Mexican President

to sign a deal before he leaves office to raise the negotiating pressure on Canada. Mr. Trump implied Monday that either Ottawa signs on or he’ll slap a 25% tariff on cars made in Canada.

Canada handled that threat with prudent restraint, praising the U.S.-Mexico “progress” and offering to rejoin trilateral talks this week. Mr. Trump griped Monday with cause about Canada’s dairy protection, but Canada is right to want to retain Nafta’s Chapter 19 provisions that provide a way to settle trade disputes by a special tribunal.

Another problem, a large one, is that the bilateral deal strips current protections from most U.S. investors in Mexico. Oil and gas, telecom and power-generation investors will retain what they now have. Others will be protected only against physical expropriation.

But countries other than Venezuela are smart enough not to send in the police to occupy a plant or hotel. They’ll use regulation to favor domestic competitors. Believe it or not, this was a Trump-Lighthizer demand: They figure that if U.S. companies are more vulnerable to foreign abuse, CEOs will keep their money at home. This is economic nonsense since American workers prosper when their companies prosper—abroad and at home. Why make it harder for U.S. firms to court customers abroad?

The deal also imposes new red tape and costs on the auto industry to punish imports. The deal says that to get tariff-free treatment cars sold in North America must have 75% of their content made here, up from 62.5%, and at least 40% of the content must be made with workers who earn $16 an hour.

This is politically managed trade, and its economic logic is the opposite of Mr. Trump’s domestic deregulation agenda. Ford and GM seem to have made their peace with this intrusion into their management, but car makers with assembly plants in Tennessee, Alabama and other GOP-leaning U.S. states could suffer if they import more than 25% of their parts.

This auto gambit is part of the Trump-Lighthizer strategy to blow up global supply chains, and it is a political strategy to get a revised deal through Congress. That also explains the deal’s new labor provisions that go far to imposing U.S.-style labor laws on Mexico. The details still aren’t clear, but Mr. Lighthizer said Monday those rules will be “enforceable” on Mexico as part of the new deal.

of Public Citizen during the negotiations. He’s betting that helping the AFL-CIO unionize more of Mexican industry will coax Democrats to support a new Nafta. Good luck with that. No trade deal has passed in recent decades without a preponderance of Republican votes. Democratic leaders in Congress have fought every one.

Yet by waiting so long to strike a new deal, Mr. Lighthizer may have made himself hostage to Democrats. Under trade-promotion law, there isn’t enough time to vote on the revised deal during the current Congress. The deal would go to the next Congress, which could be run by

Are they really going to support a Donald Trump trade deal? The President will need their votes because free-trade Republicans and U.S. businesses are likely to be a hard sell.

The deal announced Monday has moving parts and there is still time to make improvements before it is signed and sent to Congress. We’re glad to see Mr. Trump step back from the suicide of Nafta withdrawal, but on the public evidence so far his new deal is worse.