Poll: Abolish ICE is an election year loser, even among Democrats 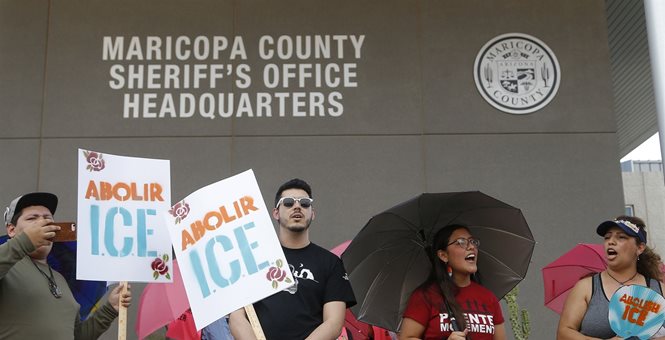 The Associated Press published a poll today which found that the far left’s “Abolish ICE” campaign is likely to do Democrats more harm than good this election season.

The rallying cry from some liberals to abolish Immigration and Customs Enforcement isn’t a likely winner this election year, as a new poll finds only a quarter of Democrats support eliminating the agency that carried out the Trump administration’s policy of separating immigrant children from their parents.

But even as they don’t want to fully dismantle ICE, 57 percent of Democrats view the agency negatively, including nearly three-fourths of those who describe themselves as liberal, according to a poll released Monday by The Associated Press-NORC Center for Public Affairs Research.

That’s bad news for Alexandria Ocasio-Cortez and the handful of Democrats, including Sen. Kirsten Gillibrand, who embraced this:

Some potential Democratic presidential contenders, such as Sen. Kirsten Gillibrand of New York, backed getting rid of ICE in response to the separations. Others, including Sen. Kamala Harris of California, urged a rethinking of the agency, but stopped short of calling for its abolition…

The push to abolish ICE became something of a litmus test among liberal Democrats this summer after Alexandria Ocasio-Cortez unseated a 10-term party leader for a New York congressional seat in part by campaigning on the issue. But it hasn’t proved a political winner in other races.

Democrat Brent Welder, endorsed by Ocasio-Cortez in July, backed ending ICE but was narrowly beaten in an August primary in suburban Kansas. And no Democrats running in competitive Senate races in November have advocated abolishing ICE.

Today, Dave Weigel published a story about the woman who defeated Welder in the primary. Kansas Democrat Sharice Davids appeared to embrace the Abolish ICE mantra during a podcast a month ago. That has now been turned into a campaign ad, even as Davids says her remarks on the podcast were taken out of context:

In the spot, which began running last week, a CLF narrator warns that “Davids wants to abolish ICE — the law enforcement agency that deports criminal illegal aliens,” making her “liberal on illegal immigration.” The evidence for that comes from an interview published on July 21 by Millennial Politics, in which host Jordan Valerie Allen presses Davids to clarify whether she, like Alexandria Ocasio-Cortez, a Democratic candidate for Congress from New York, would support scrapping the agency.

“And just to clarify, you do support abolishing ICE,” Allen says.

But according to Davids, she had never endorsed abolishing ICE and had, instead, stammered briefly while explaining the nuance in her position.

“Let me clear, I do not support abolishing ICE,” Davids told The Washington Post in an emailed statement. “I do support comprehensive immigration reform to fix our broken system.

You can read Weigel’s piece for the full explanation of her comments. Whatever you think she meant on the podcast, she is clearly not embracing the “Abolish ICE” label now. In short, everyone involved understands this position is a loser.