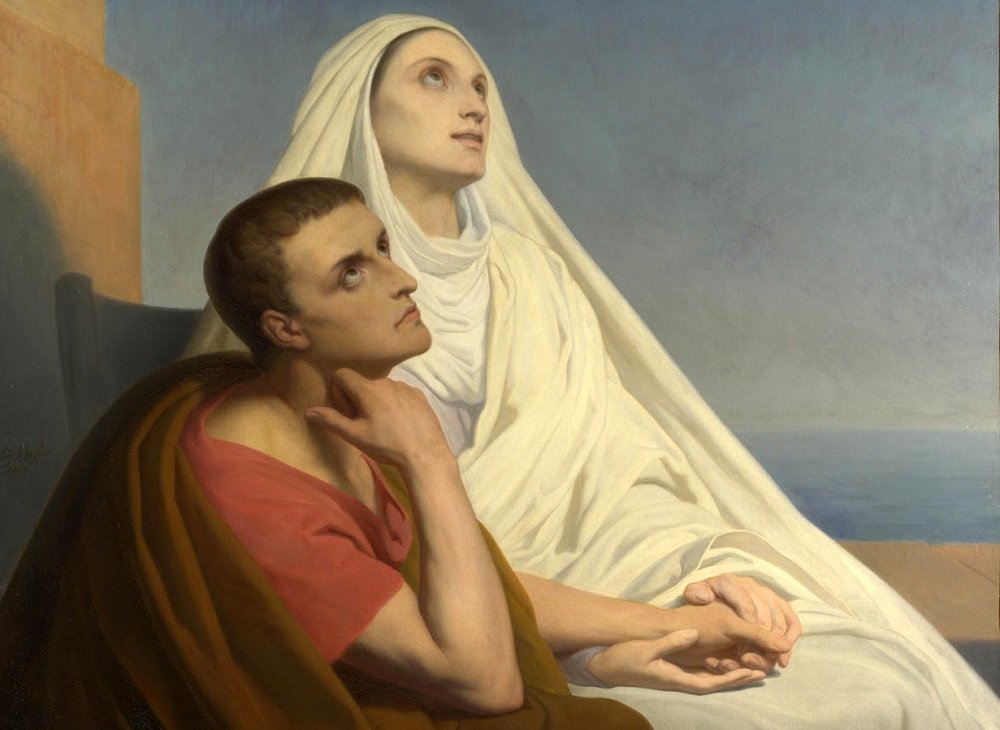 On 28 August Christians the world over celebrate the feast day of St. Augustine, a bishop and theologian beloved by the faithful across Catholicism, Orthodoxy, and Protestantism. Unfortunately, the feast day of his mother, St. Monica, celebrated the day before, typically gets short-changed. Yet behind every great man (perhaps Jesus being example No. 1) is a great mother who raised, nurtured, and taught him.

So is this the case with Monica, who exemplifies qualities of patience, persistence, and piety that believers of all stripes can appreciate. This feast day of St. Monica, we should consider what lessons we might learn from the mother of perhaps the greatest theologian of the first millennia.

A Paragon of Long-Suffering Matriarchy

We know little of Monica, and what little we know is mostly from what Augustine tells us in writings like his famous and beloved “Confessions.” She was an African, and probably of Berber extraction, given her name. She was born in 331 A.D. in Tagaste, a center of Berber culture in what is now Algeria.

She married early in life to Patricius, a Roman pagan, who held an official position in Tagaste. Patricius was known to have a violent temper and possess dissolute habits — he probably cheated on poor Monica. Yet she remained a faithful, diligent Christian, offering alms, deeds, and prayers that vexed the proud Patricius. In time she won him over, converting Patricius one year before his death.

Her relationship with her son Augustine, a notoriously wayward youth, progressed along much the same path. Augustine pursued all manner of hedonistic delights, ultimately culminating in a mistress who bore him a son, Adeodatus. Indeed, it is Augustine who uttered the famous prayer to God: “Grant me chastity and continence, but not yet.”

He also abandoned the Christianity of his mother, instead flirting with paganism and a popular dualistic Eastern religion, Manichaeism, known for its mysterious cultic practices. These behaviors deeply grieved the faithful Monica, though she never gave up hope that God would make good out of this evil.

The Inexhaustible Intransigence of a Mother’s Love

Monica took her frustrations and parental misery to God, and ran after her son Augustine with abandon. She prayed, fasted, and wept over her son’s wayward ways. This led a local unnamed bishop to console her: “the child of those tears shall never perish.”

When Augustine secretly fled his mother for Rome, she followed after him. When he moved on to Milan, she kept on his trail. Like any good mother, Monica did not let her child’s stubbornness, stupidity, or blatant sin obscure her love for him. As Augustine writes,

Like all mothers, though far more than most, she loved to have me with her, and she did not know how much joy you were to create for her through my absence. She did not know, and so she wept and wailed, and these cries of pain revealed what there was left of Eve in her, as in anguish she sought the son whom in anguish she had brought to birth. Yet when she had finished blaming my deception and cruelty, she resumed her entreaties for me.

In the end, her perseverance paid off. After 17 years of resistance, Augustine converted to Christianity under the wise instruction of St. Ambrose, bishop of Milan. Monica’s extended period of longsuffering for him matched her waiting for her husband, for whom she may have prayed for as long as 30 years.

What followed Augustine’s conversion was a period of deep spiritual friendship between mother and son, so much that Augustine praised his mother in language and imagery unusual for his time, which was reluctant to offer such ebullient praise and homage to women.

An Imperfect but True Piety

One might be inclined to place Monica on an impenetrable pedestal of perfection, but neither is this a fair representation of her life. In his “Confessions,” Augustine relates that Monica had struggled with alcoholism:

There had stolen upon her a love of wine. For when she, as being a sober maiden, was as usual bidden by her parents to draw wine from the cask, the vessel being held under the opening, before she poured the wine into the bottle, she would wet the tips of her lips with a little, for more than that her inclination refused…. And so unto that little, adding daily littles (for he that despises small things shall fall little by little), she contracted such a habit as, to drink off eagerly her little cup nearly full of wine. Where, then, was the sagacious old woman with her earnest restraint?… For the maidservant who used to accompany her to the cellar, falling out, as it happens, with her little mistress, when she was alone with her, cast in her teeth this vice, with very bitter insult, calling her a wine-bibber.

Yet Monica the “wine-bibber” eventually overcame this habit, which is why she is also titled one of the patron saints of alcoholics.

Despite this imperfection, Monica was a woman of deep piety. She would bring offerings of food and drink for the impoverished, Augustine noting that she would “give all that she could to the poor—so that the communion of the Lord’s body might be rightly celebrated in those places.”

Indeed, in her latter years St. Ambrose revered her as one of the holiest women in Milan. Such deeds show that our bad habits and sinful inclinations, although obstacles to living good lives, need not have the final say.

A Mother For Our Times

Every age demands mothers who make deep, often decades-long sacrifices for the sakes of their children. Our time is no different, particularly given trends among men, who often appear more inclined towards video games and pornography than doing the hard work of raising families.

As in Monica’s day, motherhood is often a thankless task, the daily trials known only to one’s own family, if they are ever recognized and appreciated. Yet for those women who patiently and piously persevere in their devotion to God and family, the rewards are beyond human measure. Indeed, who knows which mother in our own day is raising the next Augustine?

This feast day of St. Monica, pray for, and personally thank, the mothers in your life, charting their righteous deeds, that what was said of Monica on her gravestone might be said of them:

Here the most virtuous mother of a young man set her ashes, a second light to your merits, Augustine. As a priest, serving the heavenly laws of peace, you taught the people entrusted to you with your character. A glory greater than the praise of your accomplishments crowns you both – Mother of the Virtues, more fortunate because of her offspring.