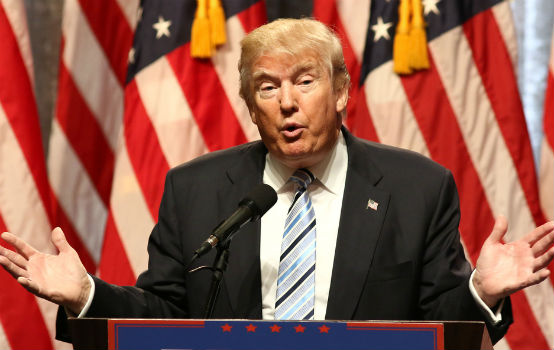 Like clockwork, every time there’s a mass school shooting, the Left declares it an epidemic and demands more gun control.

There’s just one problem: there is no epidemic. School shootings are at historic lows.

This is not to dismiss very real tragedies that have affected so many—too many—families and communities. Nor is it to end conversations about the problem of school shootings. The lack of an epidemic should by no means silence important dialogue.

When Donald Trump tweeted Wednesday about the “South African Government…seizing land from white farmers” and the “large scale killing of farmers,” many observers were quick to say that the president—and Fox News’s Tucker Carlson, who reported on the issue and inspired Trump’s tweet—were parroting white supremacist and alt-right talking points.

It’s true that white supremacists themselves approved of the president’s tweet. But it’s a dangerous assumption to associate them with Trump.

Yes, for some time, white supremacists, for obvious reasons, have been talking about “white genocide” in South Africa, promoting a narrative that white farmers are being murdered in large numbers. And white farmers and others have been murdered, more than just a few.

However, as BBC News reported last year, the motivations are debatable. “The South African Police Service has argued that the majority of attackers are motivated purely by a desire to rob farmers,” it said, “but the country’s Institute of Race Relations has warned there may be a racial element to some of the attacks.”

“According to the best available statistics, farm murders are at their highest level since 2010-11,” the BBC noted a year ago. “South Africa’s Police Service says 74 people were murdered on farms between April 2016 and March 2017, up from 58 in the previous year.” However, more recent data shows that South African farmer murders are at a 20-year low.

So whether the “large scale killings” Trump described are actually happening is debatable at best, though statistics are probably of little comfort to slain farmers and their families. Our hearts go out to them, politics aside. Conversations and even news reports—whether on Fox News or elsewhere—should happen.

What is not debatable is South Africa’s new land-grabbing policy.

“Eighteen years ago, Zimbabwe embraced a similar policy,” Tupy observed. “As a consequence, South Africa’s northern neighbor’s economy collapsed and the country descended into penury and political violence.” He added: “This scenario is likely to repeat itself in South Africa.”

Tupy was Carlson’s guest on Wednesday night (probably not a coincidence following Tupy’s report two days prior, and last I checked Cato is not a white supremacist organization), where he expounded on his concern over South Africa’s new policy. Carlson said Fox News had reached out to the State Department but had largely been rebuffed.

This was when Trump tweeted directly at Fox News and Carlson saying he had asked Pompeo to look into it.

The president of the United States had watched a news report about something dire happening in another country and said he would check on the situation because he could. He was answering Carlson’s question. No one should be surprised that Trump would do something so direct, given everything we know about him.

The context was that a Fox News host had talked mostly about government expropriated land while mentioning the reported violence in tandem. Yet Trump’s “large scale killing” line became almost the entire focus of criticism by the media.

That Trump and Carlson are taking their talking points from neo-Nazis seems absurd once one takes into account the full circumstances of what occurred, something most mainstream outlets have not done in their eagerness to tag both men as racists. Is the Cato Institute a bastion of bigotry? Of course not.

I have spoken out against the alt-right and its promoters more than many on the Right. But part of those efforts has also been to criticize a media all too eager to portray things as alt-right that aren’t. Doing this has only empowered a vile movement that has thankfully lost most of its steam.

Last week, I wrote what amounted to the alt-right’s obituary after their pathetic “Unite the Right 2” event in Washington, D.C. Now I’m explaining why the president of the United States and one of Fox News’s most popular personalities are not actually white supremacist point men.

I wish the media would stop being an unwitting ally to genuine racists so often. There seems to be only two groups that want everyone to believe that the alt-right’s numbers and influence are greater than they are—the alt-right themselves and left-leaning journalists.

“Pushing back against racial discrimination is always worth doing and yet for some reason—a reason nobody really explained—luminaries in the media disagree,” said Carlson, defending his report after the president’s tweet. “In an Orwellian turn, various news outlets suggested it was somehow racist to oppose the racist policies of the South African government, even Nazi-like.”

Though South Africa’s complicated history and politics should be included in this discussion, Carlson is not wrong.