Pope Francis in the Dock 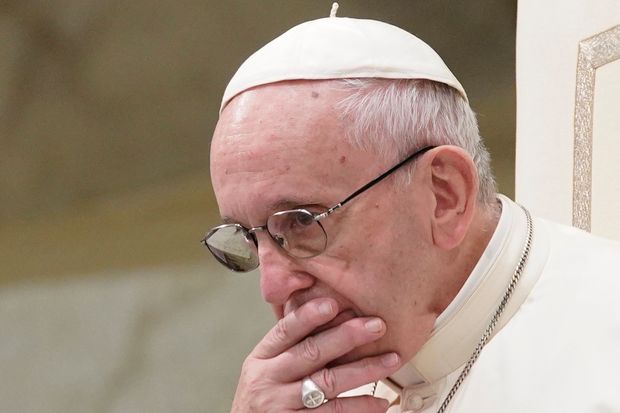 Pope Francis is caught in pensive mood during his weekly general audience in the Pope Paul VI hall at the Vatican, Aug. 22.

For Catholics still reeling from a recent Pennsylvania grand jury report detailing decades of sexual abuse by priests and coverups by their bishops, the weekend brought another shock. A former papal nuncio (ambassador) to the U.S. claims Pope Francis lifted or ignored sanctions imposed by his predecessor on Cardinal Theodore McCarrick for the cardinal’s abuse of seminarians. The nuncio, Archbishop Carlo Maria Viganò, also called for Pope Francis to resign.

The archbishop’s charges have split the Catholic community. Some defend his reputation for honesty and professionalism while others suggest he is motivated by dislike for Pope Francis, or that he disagrees with the pope’s liberal politics. Some secular defenders who like the pope’s politics, and are stalwarts of the #MeToo movement, want to excuse the episode.

But motives are irrelevant here, or at least they should be. The question is whether the archbishop’s claims are true, and that should be fairly easy to determine.

Earlier this summer, the Vatican stripped Cardinal McCarrick of his cardinal’s hat and restricted him after the Archdiocese of New York deemed credible an allegation that he had sexually abused a teenager. But among the bombshells in his 11-page letter, Archbishop Viganò reveals the cardinal had been put under sanction years before by Pope Benedict—until Pope Francis gave him a get-out-of-jail pass.

At least in America, most bishops have done a fair job implementing the 2002 reforms designed to hold abusive clerics accountable to the law and the church. Most Americans have thought the ugly subculture of priests abusing boys and girls was largely cleaned up. But if the archbishop is right, the lies continue.

Pope Francis did not help himself when asked about the charges on his way home from Ireland on Sunday, saying he would neither confirm nor deny the allegations. More encouraging was the reaction from the president of the U.S. Conference of Catholic Bishops, Cardinal Daniel DiNardo. Far from dismissing Archbishop Viganò, he asked for a Vatican investigation and issued a statement saying “the questions raised deserve answers that are conclusive and based on evidence.”

Among the ironies here is that, in the capitalist system Pope Francis so often attacks, no corporate executive publicly accused of covering up abuses like this could escape accountability. The Catholic Church is not a profit-making corporation, and the Pope is no CEO.

But when it comes to allegations of abuse and coverup against its leaders by a man who is also a senior leader, surely a church has an even greater interest in getting to the truth. Pope Francis will have to disclose and explain the truth or forfeit his moral authority.