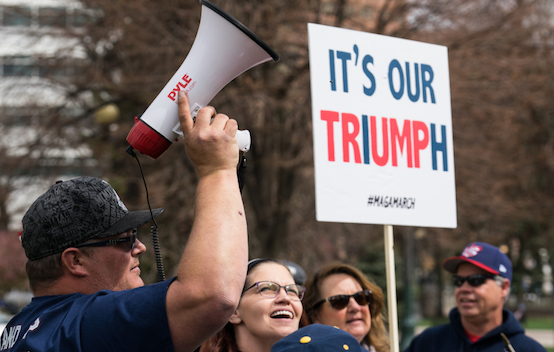 There’s an underlying reality lurking in the remarkable poll numbers released Monday by The Wall Street Journal and NBC News. They showed that Donald Trump’s approval rating declined by only two percentage points. That despite the fact that the president suffered what was by any measure a devastating week, with a former campaign chairman convicted on fraud charges and a former lawyer copping a plea on campaign finance violations and implicating Trump in the mess.

Trump’s frenzied political enemies promptly smelled blood in the water and circled the vessel like hungry sharks. Surely, they concluded, this bolt of bad news would undermine Trump’s political standing and begin an erosion that would lead to his eventual demise, either at the next presidential election or, they could only hope, sooner.

But the WSJ-NBC poll showed that 44 percent of voters approved of Trump’s presidential performance, as compared to a 46 percent approval rating just before last week’s bad news. As the Journal noted in reporting the latest results, the difference was within the poll’s margin of error and hence statistically insignificant.

Peter Hart, the Democratic pollster who conducted the opinion survey along with Republican Bill McInturff, said the new numbers, seemingly impervious to the president’s growing sleaze factor, represented a challenge to those who’d hoped that Republicans will be devastated in this year’s midterm elections. “For the 2018 Democratic strategy,” said Hart, “the Manafort and Cohen convictions represent a fool’s gold opportunity rather than a silver bullet solution.”

As the Journal added, “The results are a testament to the durable loyalty of Mr. Trump’s core supporters, who have throughout his presidency remained largely unmoved by the controversies that have swirled around him.” The paper quoted McInturff as saying, “We’ve had this enormous series of events, and these numbers don’t change very much.”

Because this isn’t about the fate of Trump so much as the future of America. During the 2016 presidential campaign, Trump opened up a series of fresh fault lines in American politics by advocating new directions for the country that no other politician would discuss. They included a clamp-down on illegal immigration and a serious reduction in overall immigration after a decades-long influx of unprecedented proportions; an effort to address the hollowing out of America’s industrial capacity through trade policies; an end to our nation-building zeal and the wars of choice spawned by it; and a promise to curtail the power of elites who gave us unfettered immigration, an industrial decline, endless wars, years of lukewarm economic growth, and an era of globalism that slighted old-fashioned American nationalism.

And there’s just enough ambiguity about the wide-net independent counsel investigation that snared Paul Manafort and Michael Cohen to sustain a feeling among many Trump supporters that those convictions were merely the elites fighting back. In any event, they’re perceived as having very little to do with Trump.

Before Trump’s 2016 emergence onto the political scene, many liberals believed the American future belonged to what political analyst Ron Brownstein called the “coalition of the ascendant”—including racial minorities, immigrants, Millennials, and highly educated whites residing primarily along the nation’s two coasts. They were convinced this ascendant force would eventually overwhelm the declining white majority and usher in a new era of globalism, open borders, identity politics, free trade, cultural individualism, foreign policy interventionism, and gun control.

Trump interrupted the coalition of the ascendant on its way to U.S. political hegemony. In the process, he touched off an epic struggle over the definition of America.

For those committed to the new world envisioned by the coalition of the ascendant, it is easy to see Trump, with all of his crudeness and vulgarity, as evil. After all, he’s personally distasteful and he wants to destroy the America of their dreams. But for Trump supporters, he represents their last hope for preserving the old America. These people view the stakes as so high that the president’s personal indecency and civic brutishness simply don’t register as problems. They may wish for a more wholesome leader, but no such person has emerged to take up their cause.

All of this has implications for the looming battle that is likely to ensue if Democrats retake the House of Representatives and initiate impeachment proceedings against Trump. The knot of Trump support these days may be tight, but it’s not particularly large. The 44 percent approval rating registered in the WSJ-NBC survey may actually be a bit high. According to the website FiveThirtyEight, which does polling aggregation and quantitative political analysis, that number actually stands at about 42 percent, close to his high-water mark since his early weeks in office. Nate Silver, who runs FiveThirtyEight, says that anything under 49 percent normally spells defeat for a president at reelection time.

All of this supports the view, which I have posited in the past, that while Trump may have been brilliant in crafting a successful electoral coalition in 2016, he hasn’t managed to turn that into a governing coalition. This can be seen in part by his lack of any apparent inclination to talk to Americans who aren’t already part of his base.

But that base, as Silver’s ongoing survey aggregations and the WSJ-NBC poll make clear, is ironclad. The Trump constituency isn’t going away, and any impeachment initiative from House Democrats in the new Congress is only going to further tighten its knot.

This suggests that the issues brought forth by Trump in his campaign aren’t going away either. The country is split down the seams, and some kind of Hegelian synthesis will eventually have to emerge that incorporates elements of the two competing visions of America that today are roiling national politics—and which seem irreconcilable. Trump proved in 2016 that the coalition of the ascendant wasn’t simply going to win the country by default. Even if the people of that coalition manage to get rid of Trump, the issues he raised will still be with us. The president’s unwavering poll numbers testify to that. But Trump seems to be proving also that his own coalition isn’t likely to win the country either. This is reflected in those same largely static poll numbers.

And so our ominous deadlock crisis continues, with little prospect for a resolution anytime soon. This has been a resilient nation over its 230-year history. It will need all the resiliency it can muster as we move forward.

Robert W. Merry, longtime Washington, D.C. journalist and publishing executive, is a writer-at-large for The American Conservative. His latest book is President McKinley: Architect of the American Century.