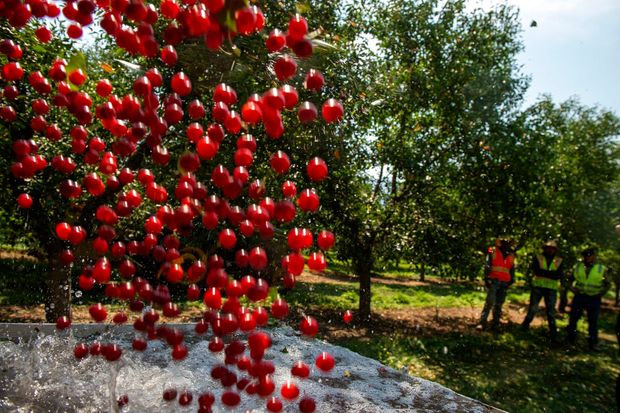 Cherry Hill Farms employees watch as freshly harvested Montmorency cherries fall into a vat of water in the orchard in Santaquin, Utah, July 26.

China is waging a food fight in response to President Trump’s trade protectionism, raising tariffs on American cherries and other fruit. Growers in the Pacific Northwest have taken a particular hit, losing up to $86 million on sweet cherries this summer, the Northwest Horticultural Council estimated last week.

A growing Chinese upper-middle class has developed a taste for sweet cherries, and the Pacific Northwest grows more than any other U.S. region. In 2017 China bought about three million boxes, or 12% of the region’s total crop, surpassing Canada as the top export destination.

Commence the trade war. In April China retaliated against Mr. Trump’s steel and aluminum tariffs by raising the tariff on cherries to 25% from 10%. American cherries are a luxury item, and affluent Chinese kept buying despite the price hike. But after the U.S. imposed a 25% tariff on an additional $50 billion of Chinese imports, Beijing raised the cherry tariff again—to 50% on July 6. That was too much even for China’s nouveau riche.

By then cherry growers in the Pacific Northwest had already spent the money to grow, harvest and pack their crop. Shelf life is short, and cherries can’t be stored like wheat. So growers are under pressure to sell at whatever price consumers will pay.

“Chinese importers were very forceful in accounting for the tariffs in their purchase price from us,” says Chris McCarthy, CEO of Auvil Fruit Company of Orondo, Washington. “Chinese consumers will spend only so much, so the Chinese importers say: ‘Option A is I buy nothing. Option B is you lower your prices to account for what I pay as a result of the tariff.’ We lose all negotiating power or leverage in that equation because you can’t just sit on the supply and hope they give in. Our products will rot. So we sell and try to recover as much of our upfront cost as we can, just to minimize the damages.”

On July 6 Chinese importers demanded Auvil Fruit Company sell Rainier cherries for $1.44 a pound less than they had paid the day before, Mr. McCarthy says. This summer Auvil lost more than $2.2 million in profit.

China has also used inspections to retaliate against U.S. goods. For a few weeks this spring Chinese officials cited dubious concerns about pests and pesticides to ratchet up scrutiny on American fruit shipments, trapping them in port. By the time the produce was released, much had rotted, and growers took a loss on what they couldn’t sell.

Many cherry farmers grow apples and pears, which are also subject to China’s 50% tariff. Mexico and India are among the biggest export markets for American apples, and both are taking retaliatory measures over the steel and aluminum tariffs. Mexico’s 20% penalty took effect in June, and India has a 25% tariff hike planned for Sept. 18, raising the total import tax to 75%.

“With farming in general, there’s a lot of stress because of things you can’t control, like weather,” Mr. McCarthy says. “This is something that’s very controllable by our government. Growers like Auvil aren’t going to be the beneficiaries of a trade war. But we’re paying a tremendous price.”

That message extends beyond the roughly 2,500 cherry growers in the Pacific Northwest. When the government picks industries to protect, it creates losers too.