WaPo: Trump to cut off funding to Palestinian refugee aid 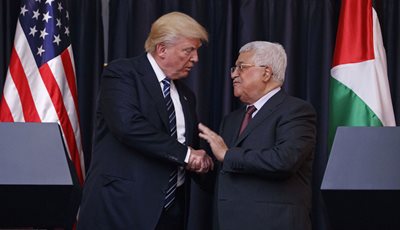 Just who is a Palestinian refugee, and how long should the UN keep funding them? The Trump administration will weigh in on both questions with hardline responses, the Washington Post reports, cutting off the remaining US funding for refugees in the West Bank and Gaza. The move follows after an ending of direct US aid earlier by the White House:

In an announcement to be made within the next several weeks, the administration plans to voice its disapproval of the way the U.N. Relief and Works Agency, or UNRWA, spends the funds and to call for a sharp reduction in the number of Palestinians recognized as refugees, dropping it from more than 5 million, including descendants, to fewer than a tenth of that number, or those still alive from when the agency was created seven decades ago, according to officials familiar with the decision.

Any such reduction would effectively eliminate, for most Palestinians, the “right of return” to land contested with Israel. More immediately, many regional foreign policy and security experts, including in Israel, say that slashing UNRWA’s budget, amid a call to “de-register” refu­gees, would worsen an already disastrous humanitarian situation, especially in Gaza, and sharply increase the level of violence.

In addition to contributions to UNRWA, the United States has provided direct, bilateral assistance to the West Bank and Gaza. Last week, the State Department announced that more than $200 million in already appropriated aid for this year would be “redirected” elsewhere. The cuts in funding, along with shifts in policy, including recognition of Jerusalem as Israel’s capital, are part of a major reshaping of Middle East policy under President Trump.

The “right of return” has been a pipe dream for decades, regardless of how one defines refugee status. As currently defined by the UN, it would allow Palestinians to flood into the Jewish state with full voting rights, putting a quick end to its status as a haven for Jews around the world. Israel never would agree to that, and the insistence on keeping it as a bargaining chip only makes settling the conflict more difficult. Even under the Trump administration’s proposed definition, it would add 500,000 refugees back into a nation of 8.4 million people, which would at the very least destabilize its politics for a significant period of time. Either way, Israel has made it clear that it ain’t happening, and that’s not up for debate for very good reasons.

Depriving the UNRWA of funding while it supports the right of return and the expansive definition of refugee status makes sense, in that context, as well as the overall problems with UN relief agencies and their corruption and inefficiencies. However, it doesn’t make a lot of sense to cut that funding while cutting direct funding at the same time, especially with the administration still planning to release its own Israeli-Palestinian peace plan. Even putting aside the fact that ordinary Palestinians in the territories are poverty-stricken and need some assistance, the funding provides some leverage and connection to the leadership that will have to be convinced to follow American leadership. Direct funding gives us that leverage and control over how it is applied, while cutting off the funding essentially makes US leadership irrelevant. That will only help the hardliners and extremists.

The White House argues that other Sunni nations will have to step up and provide assistance, such as Saudi Arabia. That’s all fine and good, and should have been happening all along in tandem with the US, but that raises an obvious problem. Whoever does supply the aid will increase their influence in the West Bank and Gaza. What if Iran fills the vacuum rather than Saudi Arabia, or Pakistan, or Russia? That will make it even tougher for the US to impose its vision of an Israeli-Palestinian settlement.

Perhaps Donald Trump sees this as an opportunity to deploy a disruptor strategy, and this certainly qualifies as a disruption from the decades-long status quo of American policy. Those decades have never produced much of a solution, thanks especially to the intransigence of Yasser Arafat when Bill Clinton offered the Palestinians almost everything they wanted short of the right of return and who then ordered intifadas as a response. Maybe cutting off aid to the failed PLO-successor leadership will shake things up enough to produce more pragmatic leadership, but it’s a big gamble.