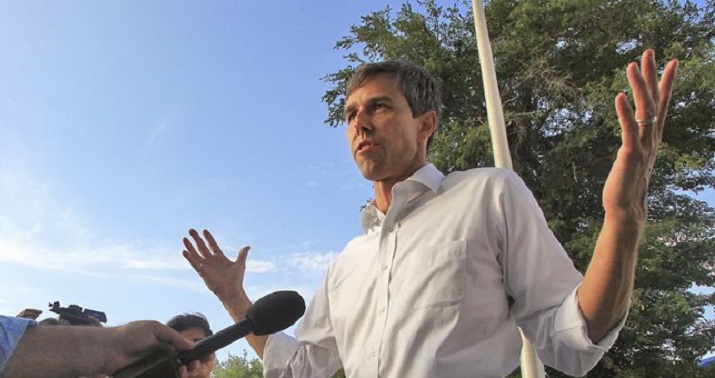 Clearly, the Democrats have a fever and the only cure is more Beto. Congressman O’Rourke has everyone on the left excited at the prospect of flipping a Texas Senate seat blue and really sending a message to the GOP about the blue wave that’s coming. But with so much hope and enthusiasm being packed into a single human being, is a humble Senate seat really enough to satisfy the throngs who are awash in Betomania? Maybe we could skip the junior league stuff and just push him straight toward the Oval Office. At least that’s what one publication seems to think, but thus far the candidate is saying no. (Free Beacon)

Liberal magazine Vanity Fair declared in an article published Wednesday that O’Rourke had to be considered a serious presidential contender in 2020, “even if he loses.”

But O’Rourke, who represents a district in the West Texas town of El Paso, told the New York Times he didn’t have any desire to do that.

“No,” O’Rourke said while riding in the car, amid speculation about a future White House run. “I don’t want to do that. No.”

Of course, no candidate would say he planned to run for president in the middle of a Senate race, for fear of upsetting voters who thought the candidate wanted to use the position as a stepping stone.

With all due respect to Vanity Fair, does a backbench congressman with all of five years in office “have to be considered a serious contender” for the highest office in the land just because he took a run at Ted Cruz’s seat? Forget their caveat about “even if he loses” here and substitute even if he wins. Yes, he will have pulled off a shocking upset, but he’ll still be a freshman Senator. And if O’Rourke manages to somehow pull off this feat, it won’t be because he’s demonstrated some incredible policy prowess or inspirational vision. It will be because the demographics of Texas have been slowly shifting over the past decade or more, combined with a national referendum on the party of Donald Trump.

As to his actual chances of managing the task at hand, that’s an increasingly tough call to make. My gut tells me that Texas isn’t ready to flip a Senate seat just yet, but the polls show that Cruz will only win in a squeaker if he pulls off another victory. The RCP average had Cruz above 50% not all that long ago, but now the lead is down to around 4 points. And one of the most recent Emerson polls had his lead at a single point. (Though that one might be an outlier.)

Complicating the issue in the other direction is the recent news that O’Rourke attempted to flee the scene of his DWI accident many years ago. Personally, I don’t see that changing the minds of any of his solid supporters but it might have some impact on the remaining undecided voters. Then again, they didn’t seem to hold a DWI against George W. Bush, so who knows?

The broader message here shold be, at some point we’re hopefully going to learn not to keep pouring all of our hopes and dreams into the latest flavor of the month every time one comes along. (Just look at Alexandria Ocasio-Cortez if you need any proof of that idea.) Proclaiming Beto O’Rourke to be the next coming of Democrat Jesus seems to be several leaps too far, at least for now.