DISGUSTING: Liberal Hacks Say Ivanka Trump Was Texting at McCain Funeral – IT WAS A LIE! (VIDEO)

DISGUSTING: Liberal Hacks Say Ivanka Trump Was Texting at McCain Funeral – IT WAS A LIE! (VIDEO) 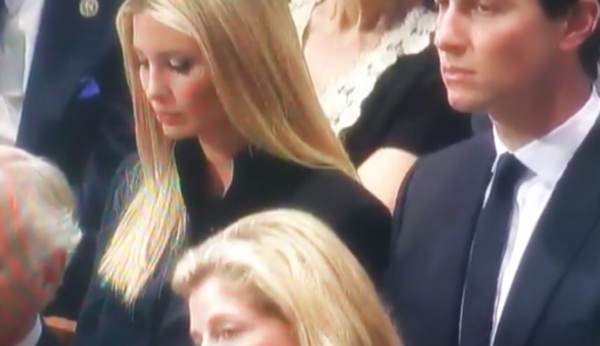 John McCain was eulogized Saturday at a memorial in Washington DC.

The funeral service was also an opportunity for the Washington DC elites to rip and trash the sitting president — who was told not to come by John McCain.

Ivanka Trump and Jared Kushner were in attendance.
They looked sad and embarrassed at the nonstop abuse.

Then liberal hacks online spread the lie that Ivanka Trump was texting during the funeral.

There is no footage of Ivanka holding her phone and texting, she is merely looking down. She may have been just been reading a program.

Ivanka Trump is a mother of three young children so she may have received a text about her children–what if there was an emergency? Liberals don’t care. They are filled with hate.

But this is the left–full of hate and rage. They will lie about anything just to bash a member of Trump’s family — his beautiful daughter.

Ivanka texting at McCain’s funeral.
Why am I not shocked. pic.twitter.com/LkqHjUNV8t

Just look how hate-filled leftists are…

#Ivanka was “rumored” to have been texting during the service. One imagines it was something, like this:

(at)realDonaldTrump: “We did it! Snuk into the funeral! Gonna try & get a selfie w/ the casket wen no1s looking. 😎😎😎 Daddy, are you proud of me?!” 💖 #FuneralCrashers pic.twitter.com/6WAmWuNGPD

Ivanka Trump is worthy of scorn but getting vilified for texting during the McCain funeral is silly
1) you can’t see a phone
2) we loved Aretha’s texts
3) as a mother of 3 she might need to answer a text
4) if she’s trending let it be for getting arrested. pic.twitter.com/rzBMw05hGQ

Meghan McCain is talking about her father being shot down, captured and tortured.

Ivanka texting during John McCain’s funeral is beyond LOW CLASS. It disgusts me. Lack of class & common sense. She IS Ivapid. “Dear daddy – It’s not that good. I don’t like Michelle’s dress.” https://t.co/IEFsl9BH0l

I dislike the Trumps as much as the next sane person, but until we actually see that cell phone in her hand, can we please not accuse Ivanka of texting during John McCain’s funeral? It is so damn petty and you are doing exactly what accuse Trump fans of doing.